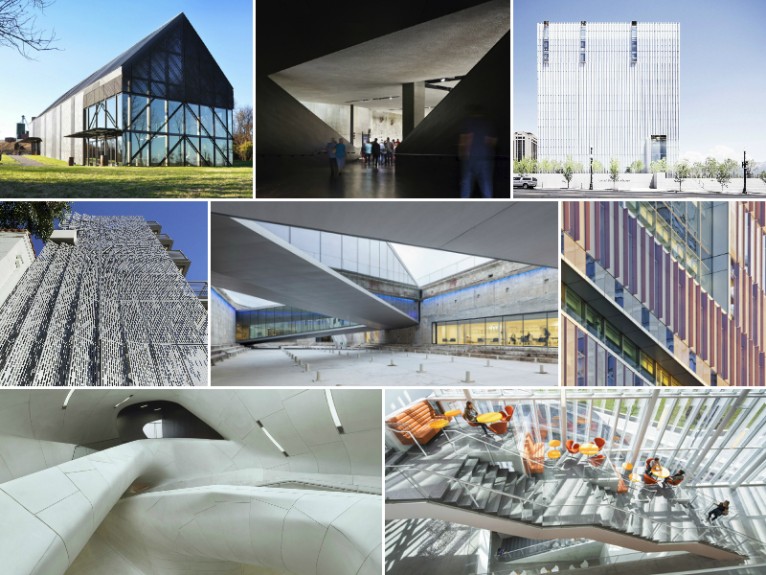 12/01/2015 - The American Institute of Architects (AIA) has selected the 2015 recipients of the Institute Honor Awards, the profession’s highest recognition of works that exemplify excellence in architecture, interior architecture and urban design.
Selected from roughly 500 submissions, 23 recipients located throughout the world will be honored at the AIA 2015 National Convention and Design Exposition in Atlanta. 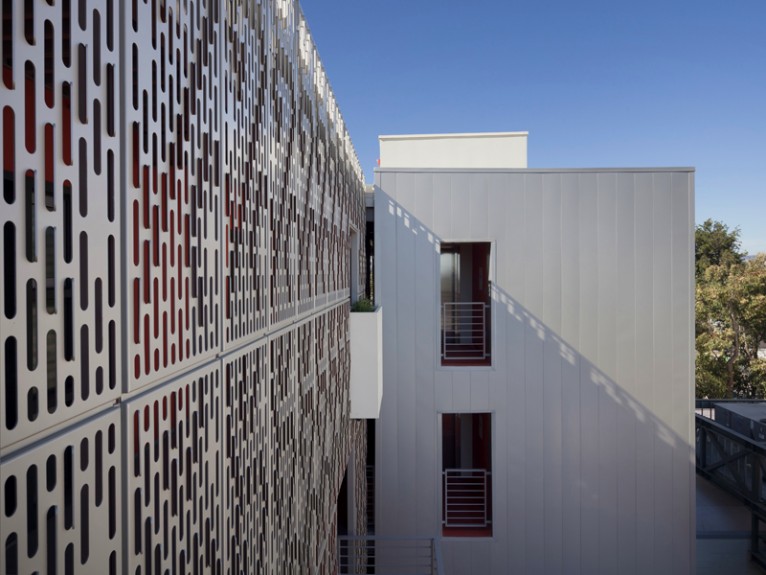 The historic YMCA (1926) had been a focus of African-American life in the era of segregation but had fallen into severe disrepair. The design re-establishes the building’s role as a community focus, restores principal spaces for youth training programs, brings existing living quarters in compliance with contemporary standards and adds new housing units. Inventive integration of new building systems released the existing rooftop for outdoor social space that connects and anchors old and new. The new addition is thin and cross-ventilated. It is shaded to the south by a vertical photovoltaic panel array and wrapped to the north with lightweight perforated metal screens that contrast with the heft of the original masonry building. 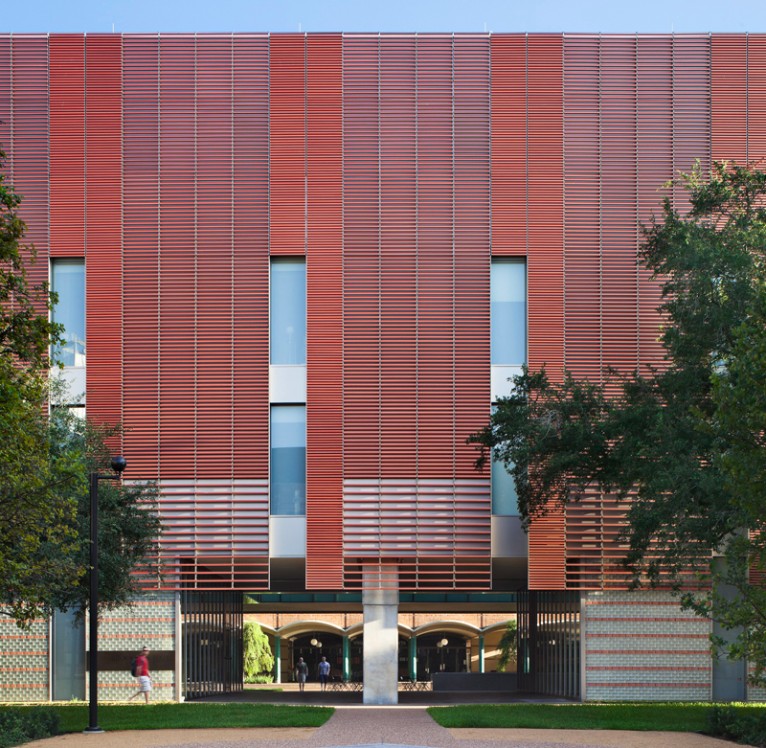 The campus of Rice University is a continuously studied and managed “canvas” that represents an intensive ongoing collaboration between architects, planners, and administrators. Its park-like environment—with live oaks, lawns, walkways, arcades, courtyards, and buildings—comprises a clear and timeless vision. The Brockman Hall for Physics needed to fit within this distinctive setting, to gather together a faculty of physicists and engineers working in as many as five separate buildings, and to house highly sophisticated research facilities carefully isolated from the noise, vibrations, and temperature fluctuations that could destroy experiments. 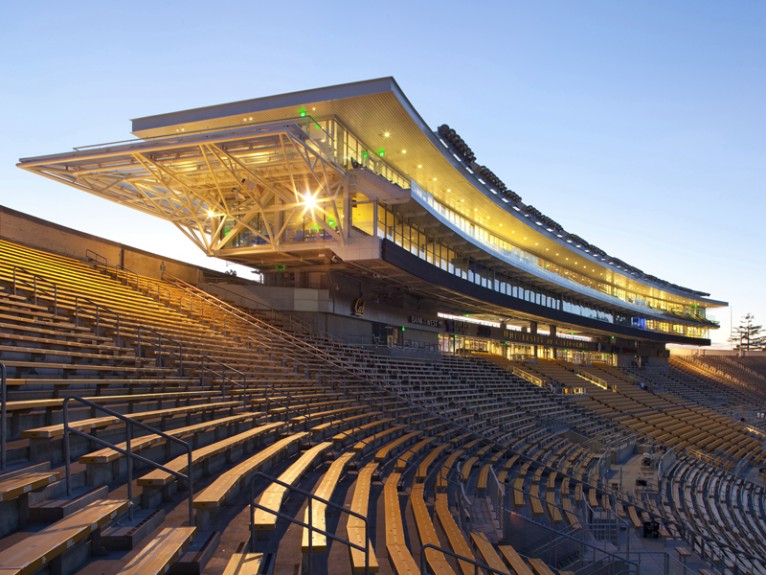 The historic stadium is one of the most beloved and iconic structures on the UC Berkeley campus. The key goals for this project were to restore the stadium’s historic and civic prominence, integrate modern training and amenity spaces, and address severe seismic concerns. By setting the new athlete training facility into the landscape, a new grand 2-acre public plaza for the stadium was created on the roof. A new press box/club crowns the historic wall; its truss-like design acts as a counterpoint to the historic facade. 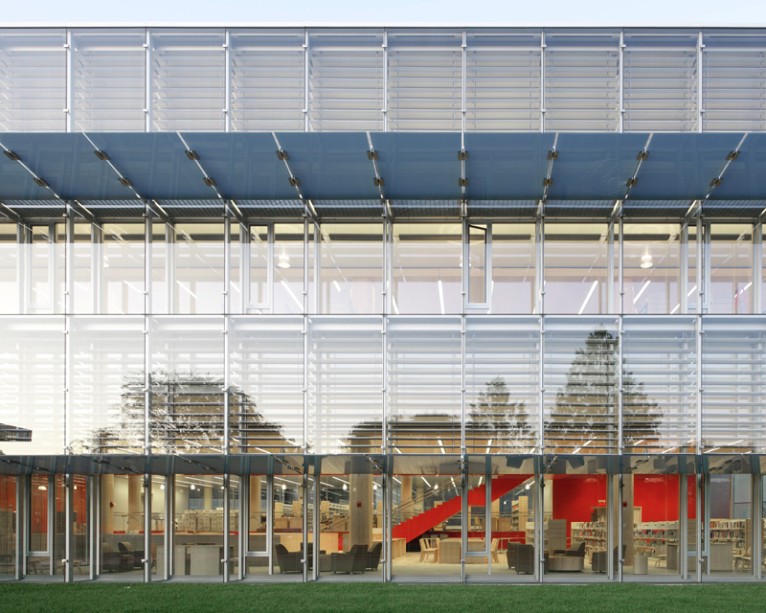 The Cambridge Public Library has become the civic “Town Common” for a city that celebrates and welcomes its highly diverse community (with over 50 languages spoken in its schools). With its all-glass double-skin curtain wall front facade, the library opens seamlessly out to a major public park. This double-skin curtain wall uses fixed and adjustable technologies to ensure that daylight is infused throughout the interiors and to maximize thermal comfort for the most active patron spaces looking out to the park. 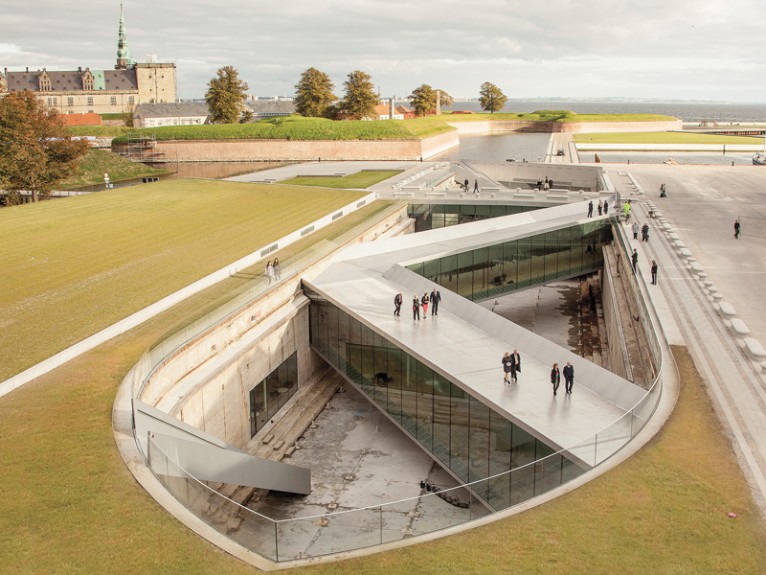 The design solution to the site’s inherent dilemmas was to wrap a subterranean museum around a dry dock like a doughnut, where the hole was the dry dock itself and the centerpiece of the museum’s collection. Three two-level bridges span the dry dock, serving as shortcuts to various sections of the museum. All floors slope gently, so that a visitor continually descends further below the water’s edge to learn about Danish maritime lore. The civil engineering and construction work for the museum were among the most complicated ever undertaken in Denmark. 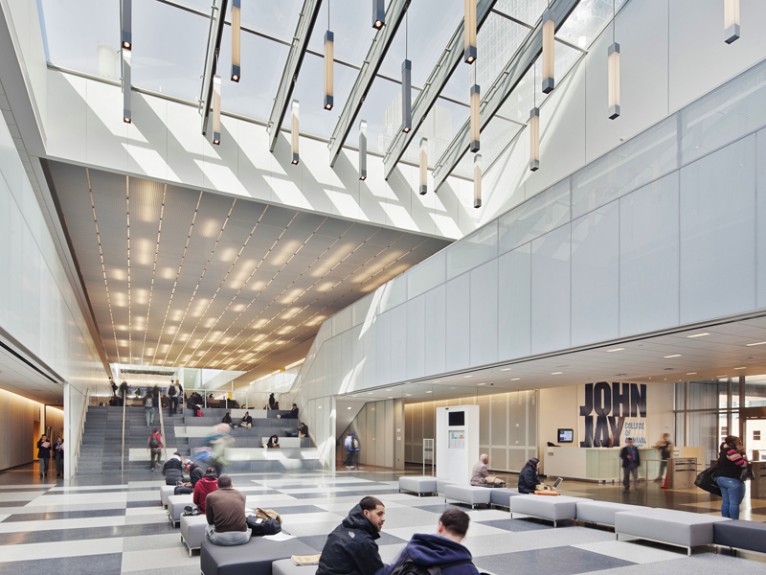 Located in Manhattan, John Jay College of Criminal Justice’s new building provides all the functions of a traditional college campus within the confines of a single city block. SOM’s 625,000-square-foot addition doubles the size of the college’s existing facilities by adding classrooms, laboratories, auditoriums, faculty offices, and social spaces. These functions are arranged within a new 14-story tower and four-story podium topped with an expansive landscaped terrace that serves as an elevated campus commons. A 500-foot-long cascade runs the length of the podium and functions as the social spine of the campus. SOM’s design places a premium on communal and interactive space so that students may enjoy the experiences of a traditional college setting.

Krishna P. Singh Center for Nanotechnology at the University of Pennsylvania, Philadelphia by Weiss Manfredi Architecture/Landscape/Urbanism 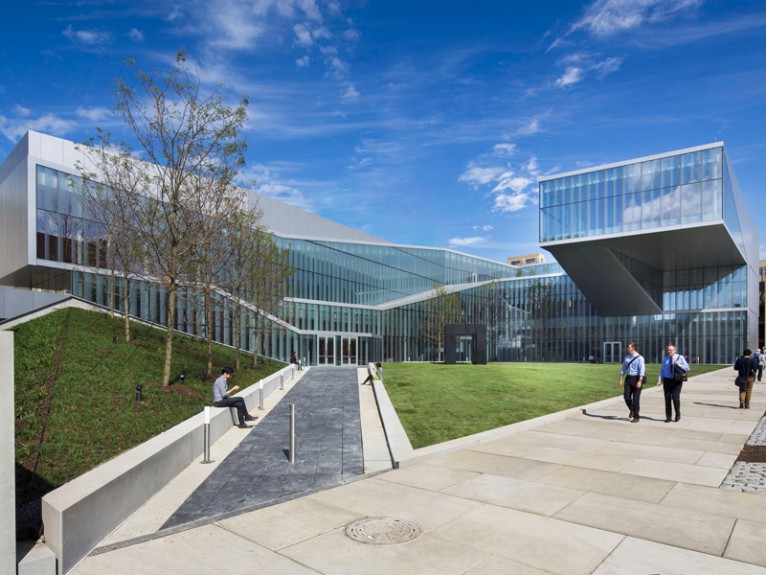 Challenging the established model of laboratory buildings, the Krishna P. Singh Center for Nanotechnology is organized around an ascending spiral that hybridizes the tradition of the campus quadrangle with the public promenade. The Center for Nanotechnology twists its laboratories around a central campus green, opening the sciences to the University of Pennsylvania’s landscape while providing a suite of public spaces within the building for cross-disciplinary collaboration amongst scientists. Here, multiple types—courtyard, laboratory loft, ascending gallery—each with their own distinct histories, are grafted together to create a new, but recognizable hybrid. 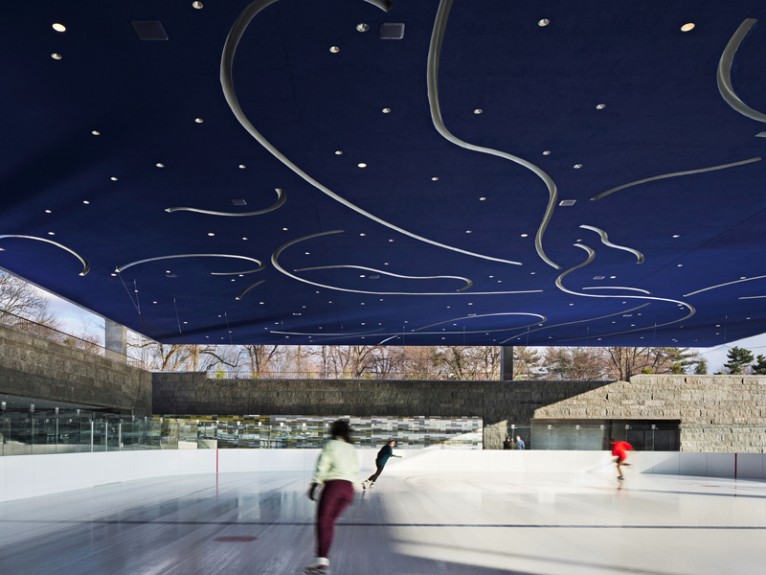 This project restored 26 acres of Brooklyn’s Prospect Park, designed by Frederick Law Olmsted and Calvert Vaux in the 19th century and added a new 75,000-square-foot, year-round skating and recreational facility. In the winter, the facility’s two rinks are open for ice skating, and in the summer one rink converts to roller skating and the other to a large water-play fountain. Clad in rough-hewn gray granite, the new LeFrak Center appears to be large stone retaining walls set in the landscape. Much of the structure is tucked into the land. The L-shaped plan consists of the east and north block, both one-story structures with roof terraces connected by a bridge.

Sant Lespwa, Center of Hope, Outside of Hinche, Haiti, by Rothschild Doyno Collaborative 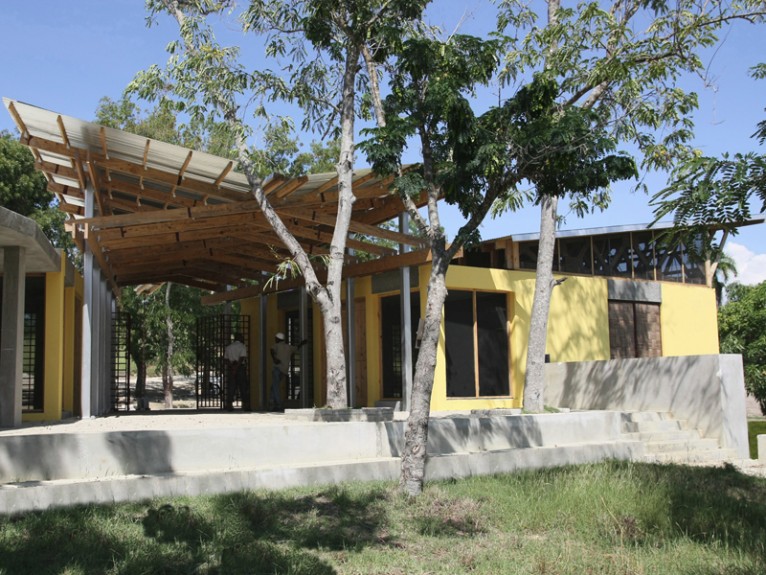 The Center of Hope, commissioned by World Vision, is located in a rural region in Haiti and provides support, education, and skill building opportunities. The design process involved the entire community from children to elders. Construction included on-the-job skills training for over 100 residents. The courtyard scheme and breezeway capture prevailing winds while opening expansive views to the mountains beyond. Careful planning for natural ventilation, daylighting, water collection, sewage treatment, and electricity generation resulted in a completely self-sufficient building. The participatory and empathetic process created an uplifting environment that inspires hope. 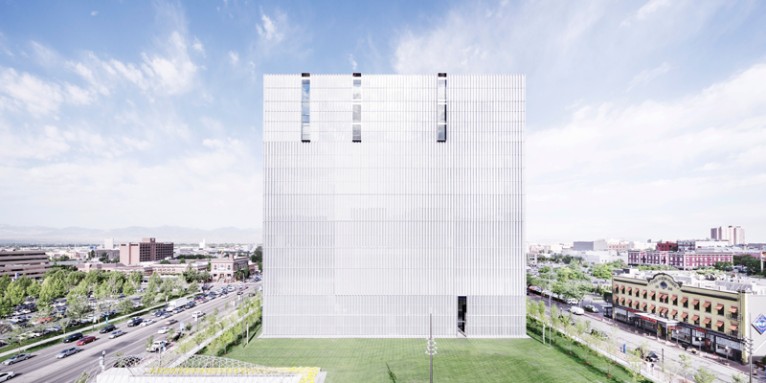 The design of the new United States Courthouse in Salt Lake City emanates from a search for a strong, iconic, transparent, and metaphorically egalitarian form to symbolize the American judiciary system. The primary nature of the courthouse’s cubic mass projects grounded dignity, immovable order, and an equal face to all sides. The 400,000-square-foot, 10-story courthouse resides on a landscaped terrace that spans an entire city block, uniting the new and existing federal courthouses as a public-access amenity while fulfilling a required federal security setback from the street. 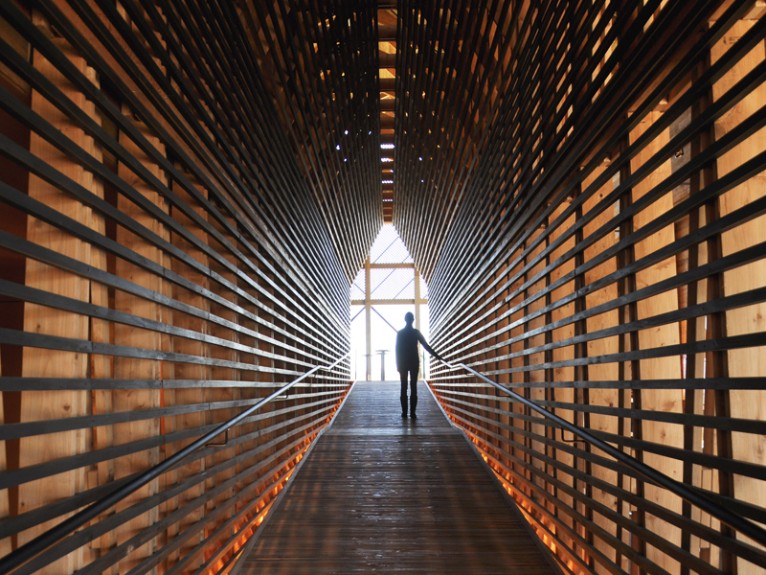 Located on a bluff overlooking the Kentucky River, the visitor center is the newest component of recent additions and expansions to the Wild Turkey Distillery Complex, one of seven original member distilleries of the Kentucky Bourbon Trail. The 9,140-square-foot facility houses interactive exhibits, a gift shop, event venues, a tasting room, and ancillary support spaces. Utilizing a simple barn silhouette (an interpretation of Kentucky tobacco barns common to the area), the building, clad in a custom chevron pattern of stained wood siding, presents a clear and recognizable marker in the landscape. 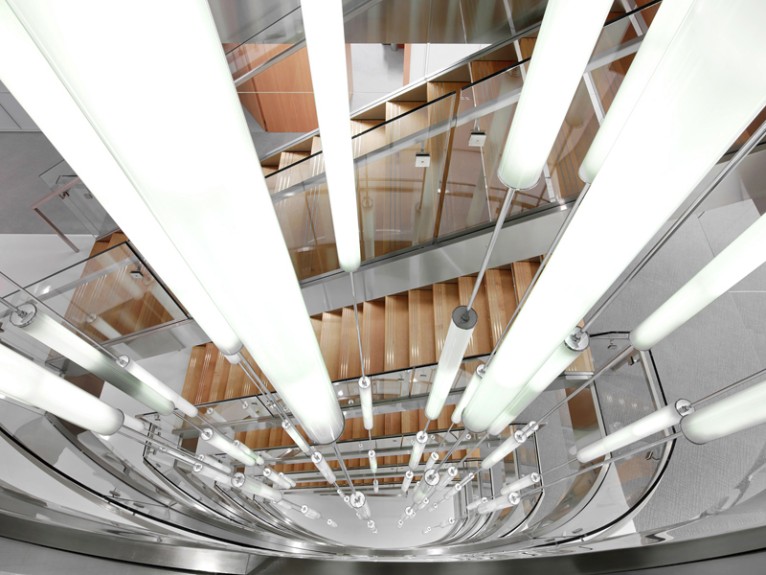 Key elements of this office building include a formal reception space with a physical and visual connection to the building lobby, a conference center, an auditorium with tiered seating, break-out areas for receptions, and slab openings on typical office floors for visual connection to other floors. The building has two primary street-facing sides and two sides that face an alley. To create parity between the two, the design places key elements on the alley side of the building to draw people from the front to the back for collaboration and support functions. Glass was used to shape offices and conference rooms and to blur the line between circulation and enclosed spaces. 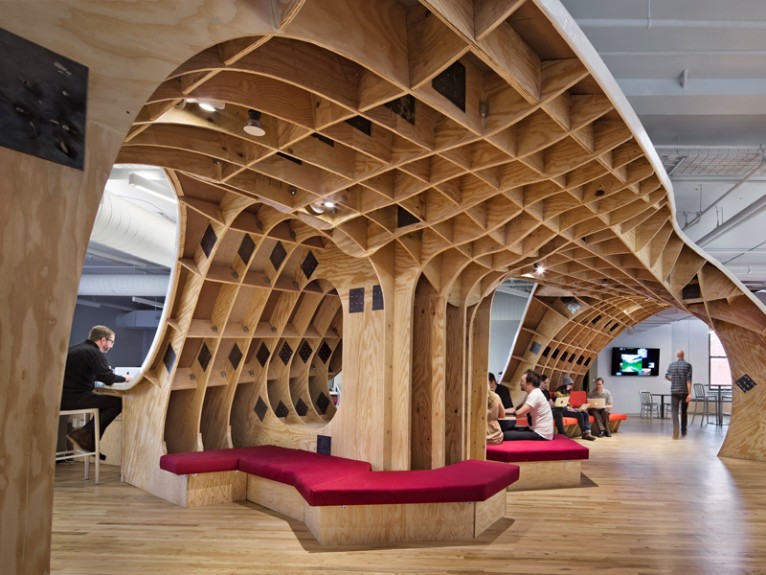 The offices for digital marketing firm The Barbarian Group were designed with connectivity, accessibility, and collaboration in mind. Simplifying the basic needs of the conventional office to their core, an endless table was envisioned that connects all employees at a single surface. The table, dubbed “the Superdesk,” rises and falls throughout the space, lifting over pathways and creating work and meeting grottos beneath its arches. Its plywood underside is made of 870 unique laser-cut panels, and its top surface is a light-reflecting pearlescent white with a clear epoxy coating. 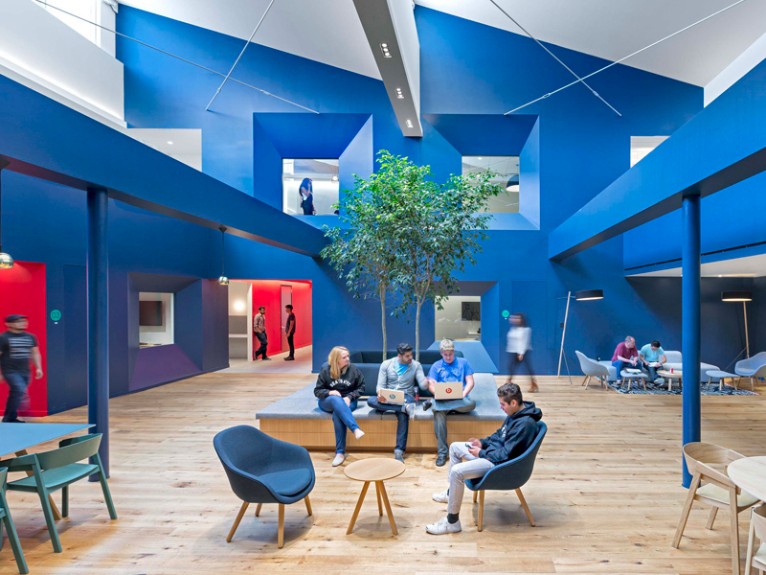 The Beats By Dre campus was designed to reflect the diverse and innovative work undertaken in the music and technological fields. The main building is carved by a, two-story lobby that forms an axis and two courtyards to orient the work spaces. Courtyards connect to the varied working environments and include offices, open workstations, flexible work zones, and interactive conference rooms. The office plan encourages interaction and contact across departments by establishing a variety of calculated environments that exist within the larger workspace: peaceful, activated, elegant or minimal. 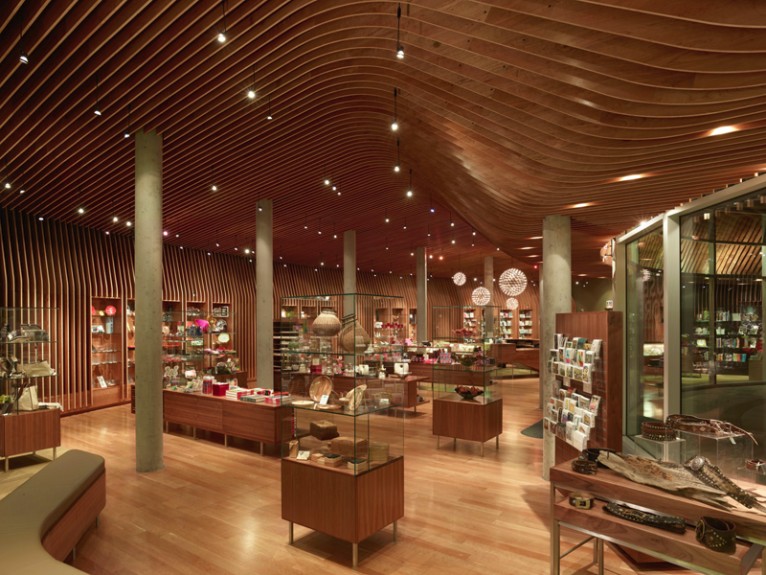 The work of a local Arkansas basket maker, Leon Niehues, known for his sculpturally ribbed baskets made from young white oak trees from the Ozarks, provided the design inspiration for the museum store, located at the heart of the Moshe Safdie, FAIA, designed museum (2011) in Bentonville, Arkansas. A series of 224 parallel ribs, made of locally harvested cherry plywood, were digitally fabricated directly from the firm’s Building Information Modeling delivery process. Beginning at the top of the exterior glass wall, the ribs extend across the ceiling and down the long rear wall of the store. 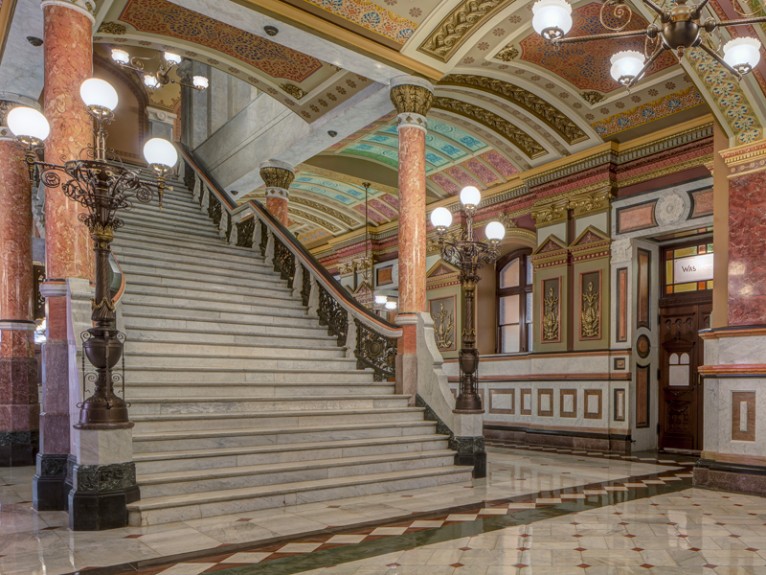 The West Wing of the Illinois State Capitol is the second phase of a comprehensive renovation program of this 293,000-square-foot National Historic Landmark. Designed by French émigré architect Alfred Piquenard between 1868 and 1888, the Capitol represents the apogee of Second Empire design in Illinois. Over the years inappropriate changes were made through insensitive modifications and fires. The project mandate was to restore the exuberant architecture of the West Wing’s four floors and basement, while simultaneously making necessary life safety, accessibility, security and energy efficient mechanical, electrical, & plumbing system upgrades. 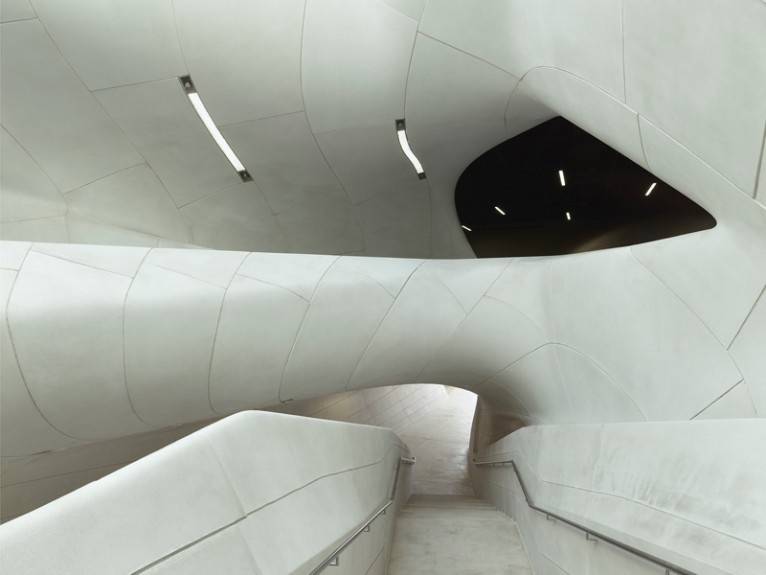 The Louisiana State Museum merges historical and sports collections, elevating the experience for both. Set in the oldest settlement in the Louisiana Purchase on the banks of the Cane River Lake, the quiet yet innovative design reinterprets the geometry of the nearby plantation houses and the topography of the riverfront; between past and future. Spaces flow together to accommodate exhibits, education, event and support functions. The hand-folded copper container contrasts with the digitally carved cast-stone entry and foyer within, highlighting the dialogue between the manmade and the natural. 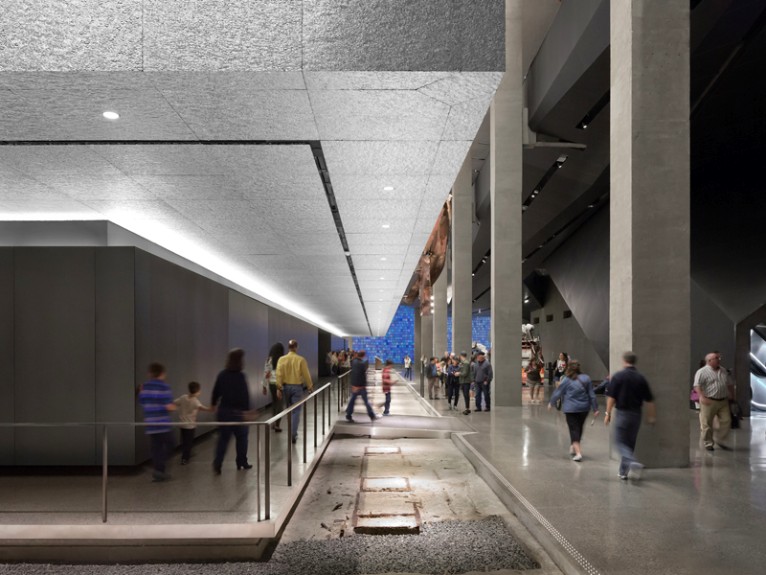 The 9/11 Memorial Museum is built upon the foundations of the Twin Towers, 70 feet below street level. Visitors reach the museum via a gently sloped descent, a journey providing time and space for reflection and remembrance. Iconic features of the site, such as the surviving Slurry Wall, are progressively revealed. This quiet procession allows visitors to connect to their own memories of 9/11 as part of the experience. Located at the site of the event, the museum provides an opportunity to link the act of memorialization with the stories, artifacts and history of that day. 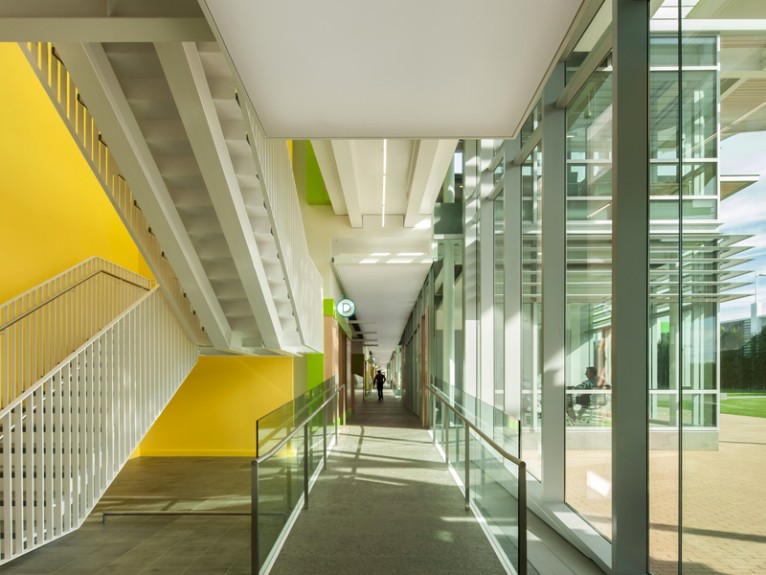 The Newport Beach Civic Center and Park creates a center for civic life in this Southern California beachside community. Nestled within a new 17-acre park, the City Hall is designed for clarity and openness. A long, thin building supporting a rhythmic, wave-shaped roof provides a light and airy interior, complemented by connections to outdoor program elements, a maritime palette, and commanding views of the Pacific Ocean. The project’s form and expression are generated by place and sustainability, as well as the City’s democratic values of transparency and collaboration.

Source: The American Institute of Architects