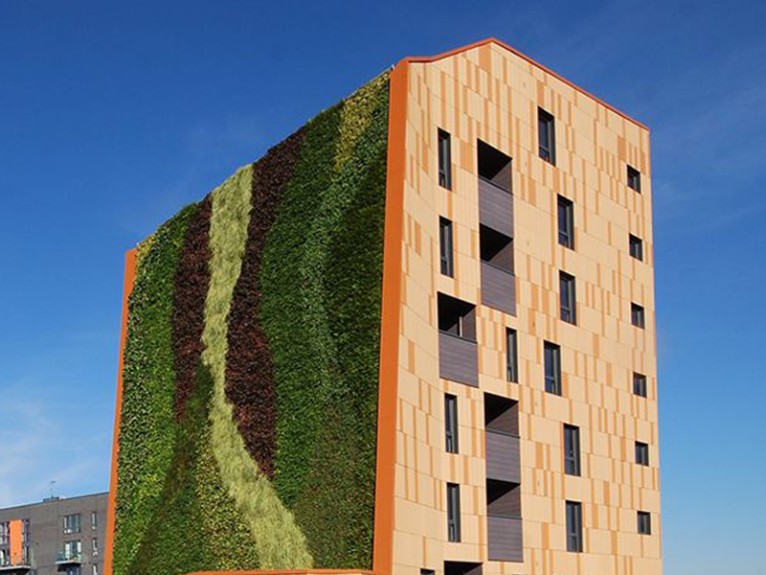 Unless you’ve been living under a rock for the past decade, you know that the term “unsustainable” basically means satanic. Practically every person and sector is now scrambling to flick their newly greened thumbs to the world and architects are following suit. Some, in particular, have gone as far as constructing actual plant walls that are now all the rage! They’re called vertical gardens and they are visually spectacular beacons of sustainability, beauty, and life…with a dark side. You know what they say, every rose has its thorn!

How does it work, you ask? Felt layers which mimic plant-growing mosses are stacked onto walls which support plant roots. Valve-controlled pipes provide nutrients and water which are pushed down by gravity to the lower plants. The system is a closed circuit: excess water flows into a gutter and is then re-injected into the pipes. The wall supposedly benefits buildings by providing cooling in the summer and heat insulation in the winter. City dwellers reap the benefit of having an architectural air purifier, as pollution particles are sucked in by the felt base, are decomposed, and become fertilizer. Finally, an added bonus: some greenery in our increasingly grey urban cities! 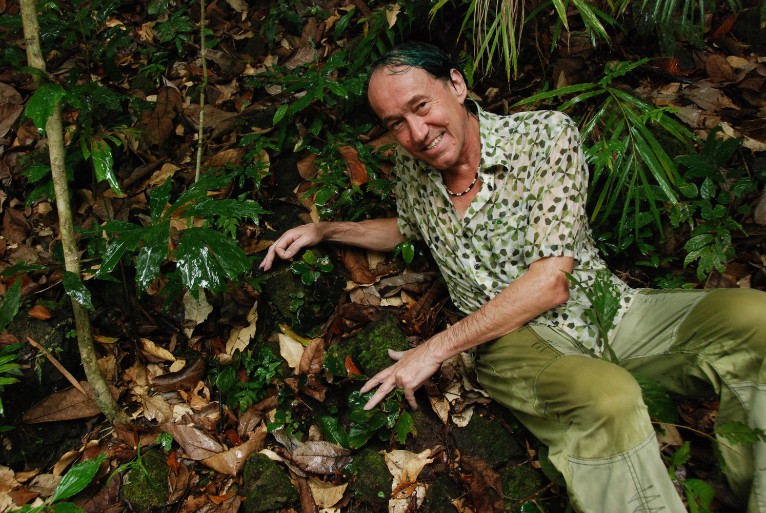 Now, we can’t talk about vertical gardens without mentioning Patrick Blanc, French botanist and modern pioneer of the green wall. He’s been erecting plant walls since 1988 and if that’s not enough to convince you of his expertise, did I mention he’s got green hair? Talk about dedication! His recent works have been popping up in cities like Paris, Miami, and Sydney and he describes them as “a shelter for biodiversity and a cleaning system for cities.” His designs have also inspired other architects to create their own versions of the live walls all around the world.

Let’s have a look at a couple of his works, shall we? 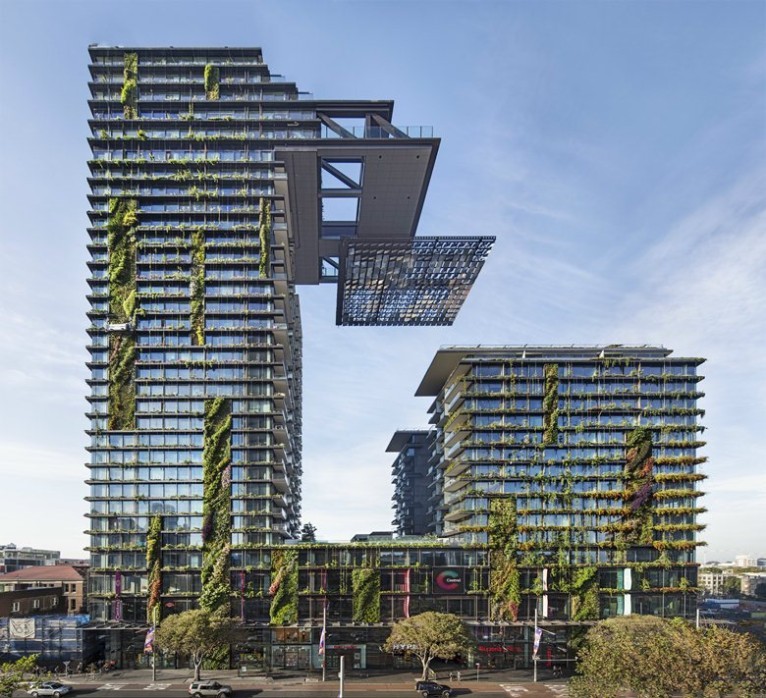 Exhibit A, the tallest vertical garden in the world: One Central Park in Sydney, Austalia. Blanc worked with Ateliers Jean Nouvel, PTW Architects, and Johnson Pilton Walker to create this beauty. The two towering structures are wrapped in verdure and provide 563 luxury apartments and a recreation podium. A multi-level parking lot and central water recycling plant are located below. 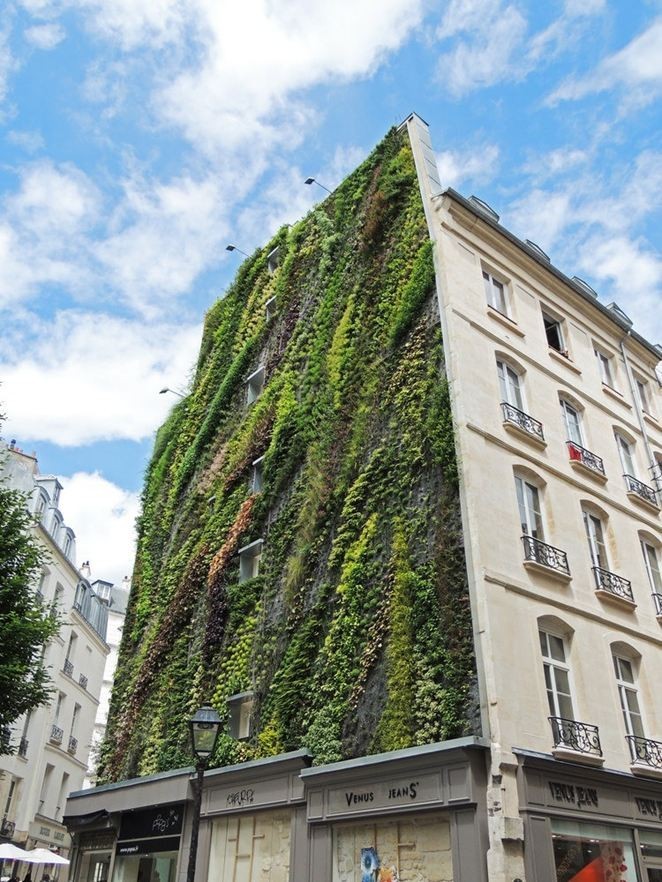 Ah, Parìs. Blanc is a Frenchmen so how could he not grace his city with one of these shrubbery murals? It’s the L'Oasis d'Aboukir, and it adds a touch of nature to the city while lowering air toxins. 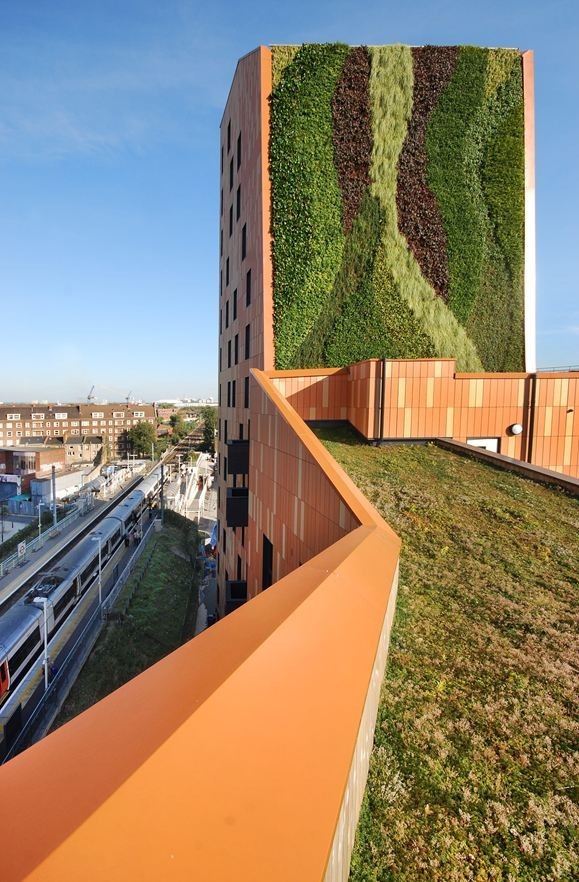 Stephen Davy Peter Smith Architects were inspired to create a 100% affordable residential unit which comprises 97 units. Digby Road is located in the UK and is sustainable on all fronts, it reaches Level 13 Code for Sustainable Homes and includes a 14 story green wall, making it the highest green wall in all of Europe. 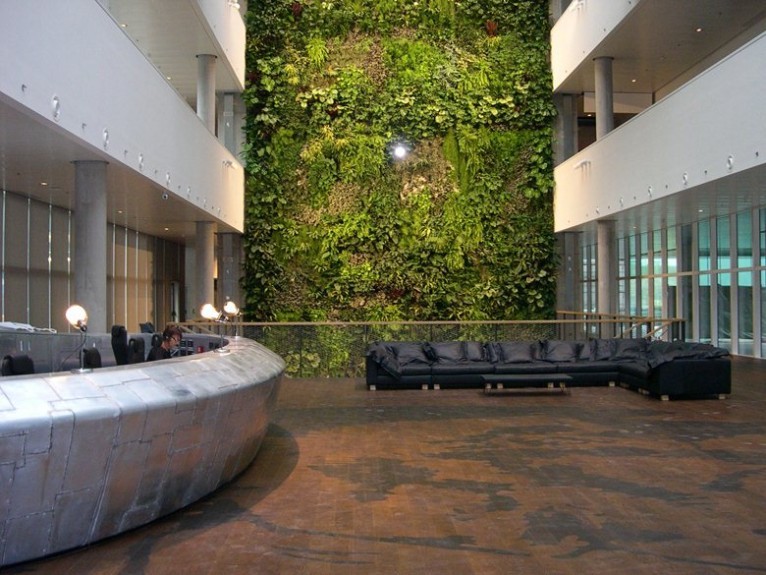 Vertical gardens have even been creeping their way inward, too! Take, for example, the Diesel Headquartersin Italy by FRAGRANCE DESIGNER di Claudia Scattolini & C.. A huge metal reception desk was equipped with a Diesel perfume diffuser, which is said to highlight the fresh fragrance of the plant partition. 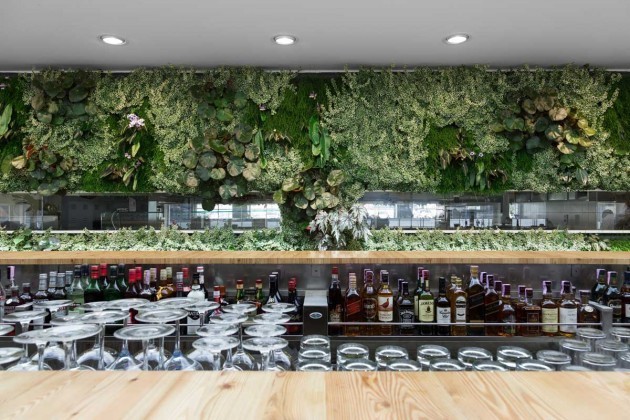 Americans won’t stand being left out on all the fun! The craze has reached as far as the United States, as we can see from a number of budding companies creating modular gardening containers which mimic Clarc’s gardening walls in a less expensive fashion. Party venue SmogShoppe has decked their indoor and outdoor walls with them, creating a fascinating space. One company has also taken the initiative to suggest lining school fences with the live walls…but some people are awfully skeptical. 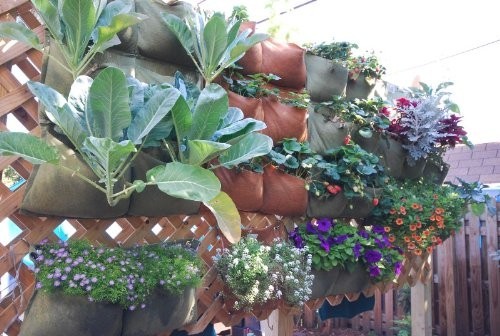 Certain areas in the America have a much more arid air quality, resulting in the necessary sacks of soil (not present in Blanc’s creations) which make up the walls. The hot temperatures and verticality of the walls make  constant watering a must, as evaporation is almost instantaneous.  The bags are strapped onto concrete structures  which tend to remain damp from water and residue, diffusing a mildewy stench into the surrounding air.Not exactly kid-friendly. Not exactly people-friendly, for that matter!

And some say the sustainability factor is a hoax. The thermal insulation promised does not compare to the water waste the product entails. Water soaked in by the walls evaporates more easily and quickly than it would in the ground, highlighting the excessive amounts of water needed to keep them alive. Less wasteful means of thermal insulation already exist. 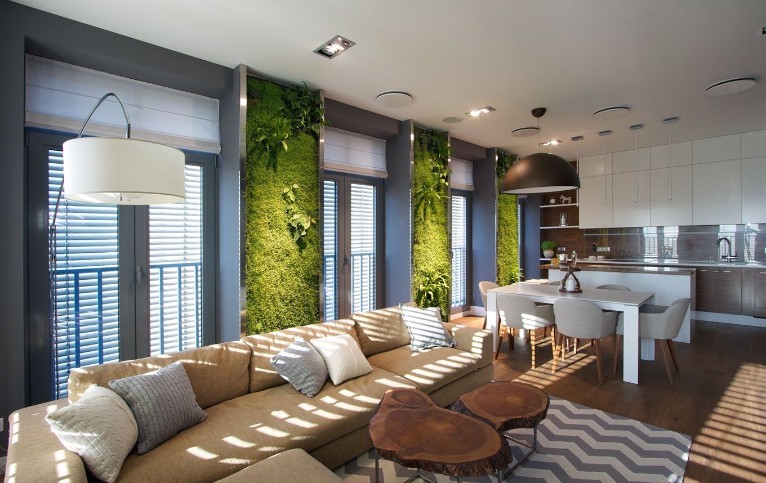 The interior live wall fad worries me even more. Are people not running the risk of having unwanted organisms appear in their living space? Take, for example the Vertical Wall Garden Apartment by SVOYA studio. That apartment has three (stunning) vertical gardens in the ktichen! Isn't that just asking for rotting roots, mold, fungus, and insects?

The bottom line is that such walls require constant maintenance, maybe even more so in areas that don’t have the best suited air quality. Is it necessary to pick and choose locations which best host the walls? Is this craze getting out of hand and into the wrong spaces?  Is the constant and proper care worth the blossoming beauties? What do you think?