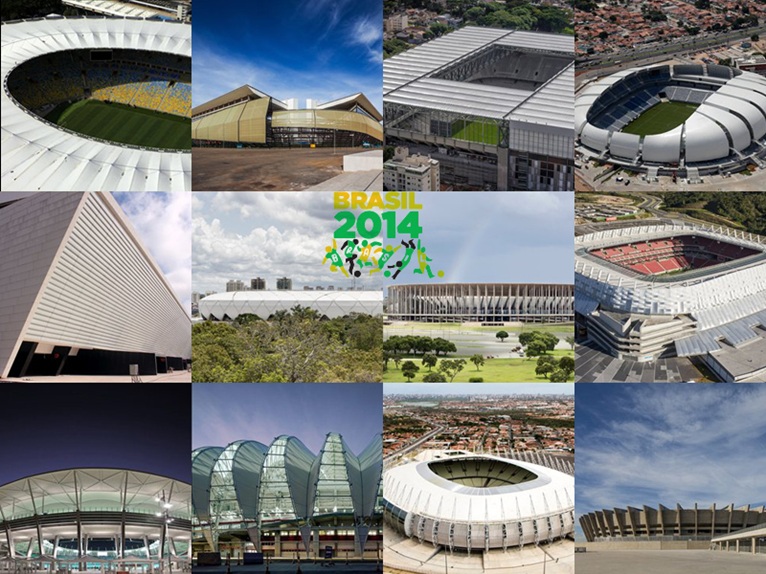 Have you got your Vuvuzela, caxirola, megaphone, hooter and banner ready? ....... be careful if you are going to one of the world cup venues to see a match with them because you probably won't be let in. All these things have in fact been banned by FIFA from being taken into the stadia, in an attempt to ruin the joy (or ensure the safety of spectators, depending on how you see it). 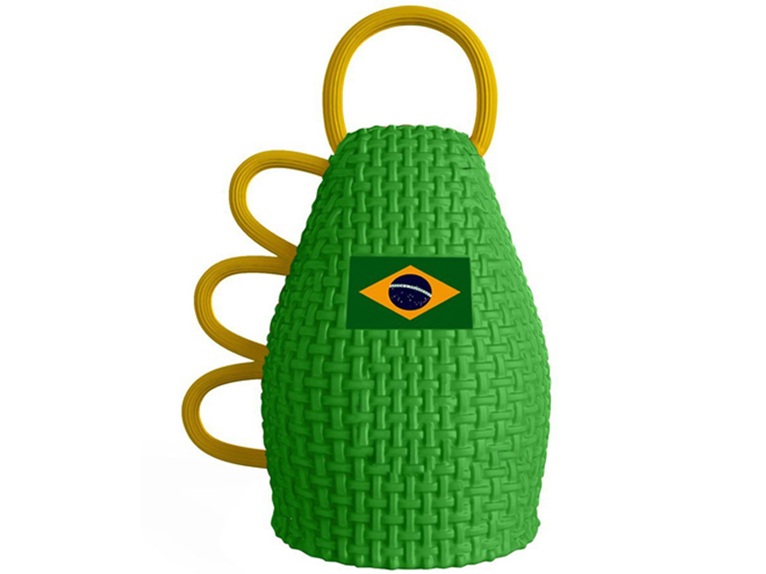 The official "noisemaker" of the FIFA World Cup 2014 the Caxirola

Many probably won't miss the incessant droning sounds reminiscent of swarms of bees that characterised the 2010 World Cup in South Africa, but what harm can a banner three square meters do? And what about the caxirola? What is it? You may ask, well it was designed by local musical icon Carlinhos Brown specifically for the World Cup. It is a plastic shaker with finger grips, certified by the Brazilian Ministry of Sport and FIFA as the "official noisemaker" of this summer's tournament (although to produce the noise produced by 1 vuvuzela you would need 30,000 caxirolas!). The Brazilian President Dilma Rousseff even showcased the instrument at an event last year, with Rousseff calling it "more beautiful than the vuvuzela". Unfortunately, however, you won't be able to use it at matches! In April 2013 it was given out free at a match for testing, but fans pelted the field with them and the local authorities voiced concerns over the damage a thrown caxirola could to to someone's head and the potential for the shaker's finger grips to be used like brass knuckles, so FIFA banned the instrument from last year's Confederations Cup in Brazil and it was sent back to the drawing board. The revised version proved too little too late, as Brazil's Ministry of Justice banished the caxirola from World Cup stadiums!

So the world cup music will have to be the songs sung by the supporters and those sung by pop stars like this:

However, as we all know, this world cup hasn't only been plagued with minor problems like these. Demonstrations have been on-going in Brazil since last year against hikes in bus fares in Natal initially, which then snowballed into demonstrations against the overspending and corruption of the mega sports events the Confederations Cup in 2013, the World Cup in 2014 and the Olympics in 2016. The completion of many of the stadia has been delayed by safety problems, with seven deaths so far reported in the stadium construction and some stadia aren't even finished yet. Some spectators might be asked to bring their own seats! 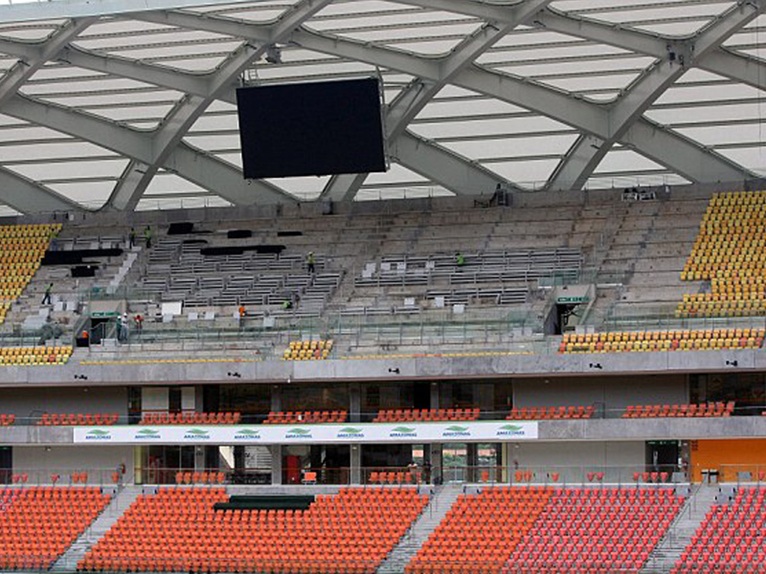 The twelve stadia, six of which are new and six are renovations of old arenas, are now ready to be invaded by football fans from all over the world. 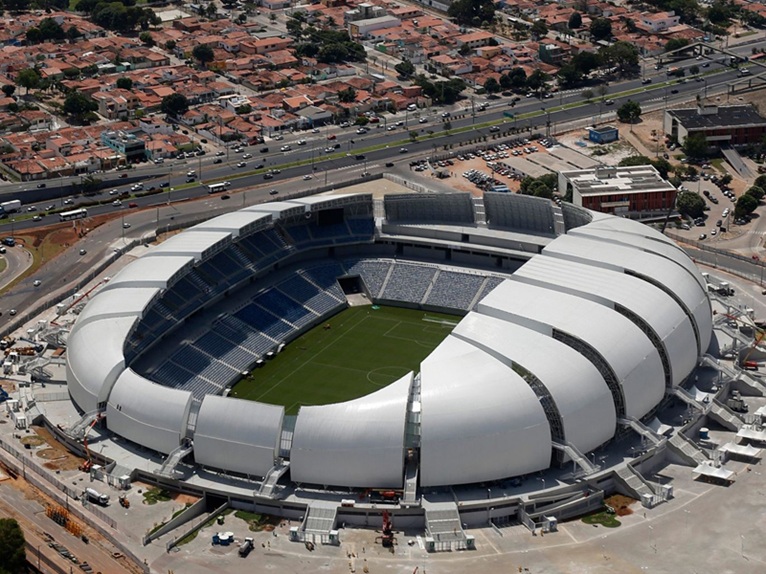 One of the most visually striking arenas is Populous' Arena das Dunas, as the name suggests its design was to echo the shape of moving sand dunes, which are common in this area. The petal-shaped structures of the roof are made of steel trusses, covered on the outside with aluminum tiles, with thermal and acoustic insulation. Internally, they are coated with a PVC prestressed membrane. The parts are joined by translucent polycarbonate, which allows light to come through. 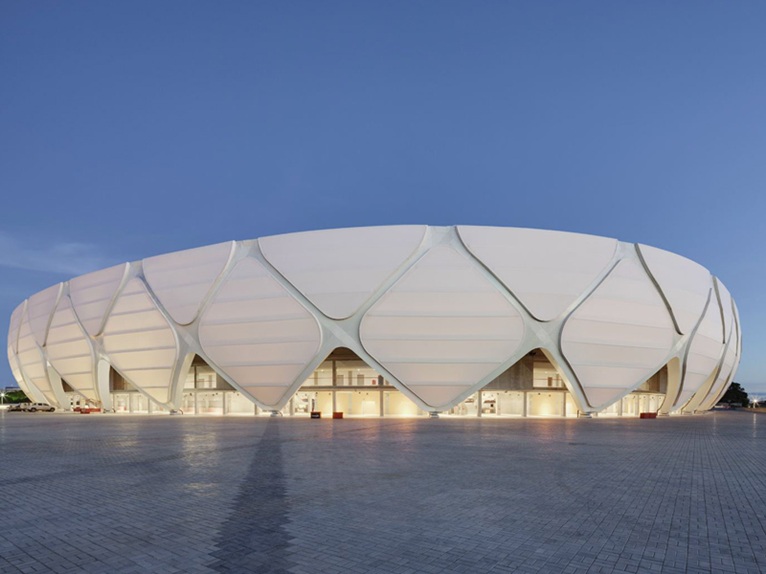 Another famous stadium architectural firm gmp Architekten was called upon to design Arena da Amazônia the venue where England take on Italy this Saturday 14th June. The stadium is one of the world’s to be certified under the LEED scheme administered by the US Green Building Council. The roof structure is composed of mutually bracing cantilever elements in the form of hollow steel box girders which also serve as large gutters for the discharge of the enormous quantities of water expected during tropical rain events. In view of the hot and humid climate at the Amazon, the roof extends into a façade which provides shade to the spectator balconies and vertical access routes. The roof and façade panels consist of translucent glass fiber fabric. 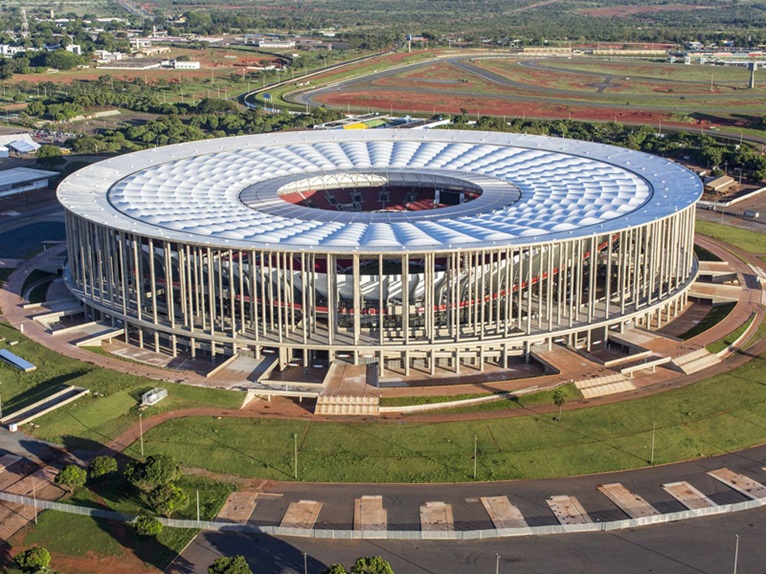 GMP were also responsible for the renovation of the Estádio Nacional de Brasília, the most expensive of the venues at a cost of over 900 million USD. 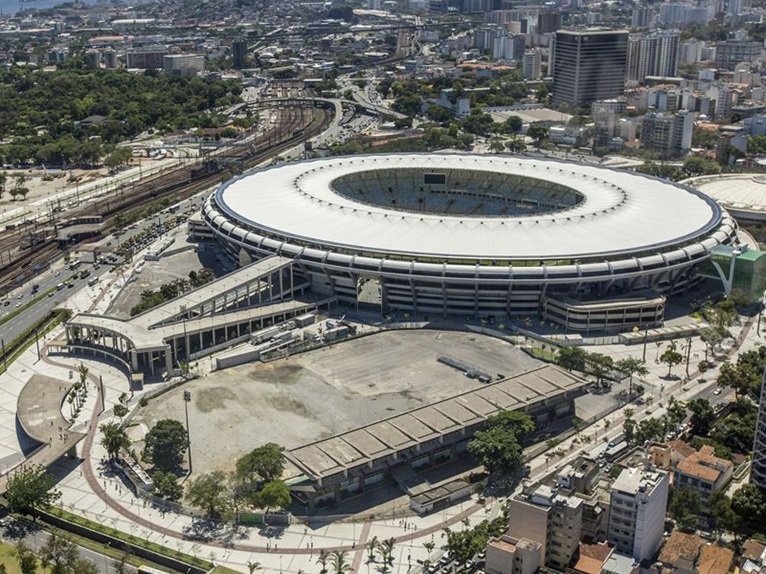 Brazilian architects fernandes arquitetos associados also designed two of the world cup stadia, the Arena Pernambuco from scratch and the renovated Estádio Jornalista Mário Filho (Maracanã), which was inaugurated on June 2, 2013, when Brazil drew 2–2 with England in a friendly match that was originally called off by the local justice due to safety concerns related to the stadium, but this decision was later overturned after an appeal by the Rio de Janeiro government. Fernandes Arquitetos' renovation project aimed to make the stadium modern and efficient while maintaining its original iconic appearance. The project maintains, for example, the first three structural axes that today house almost everything that is common and accepted in the stadium. The façade was preserved and, regardless of the point from where it is seen, from the outside Maracanã remains largely intact. 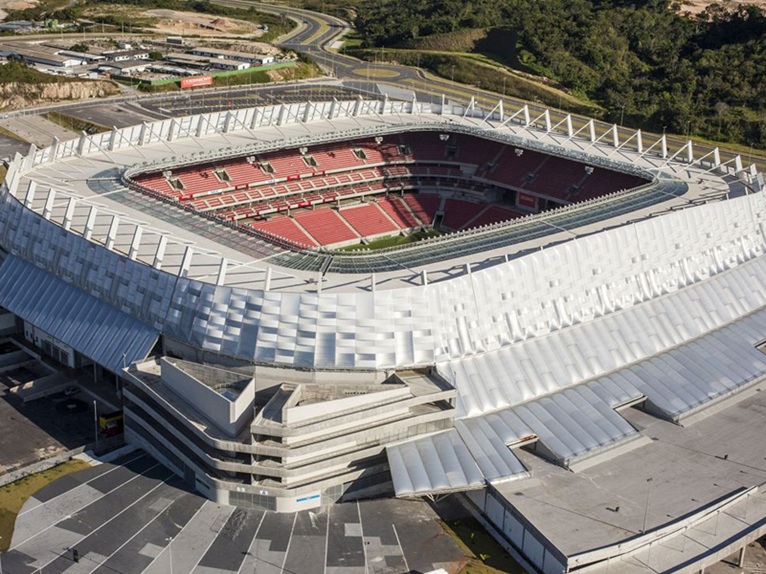 The new stadium the architects built, Arena Pernambuco, unlike the other projects of cities hosting the FIFA World Cup 2014, was not built in a consolidated urban area. The design challenge of this project was to create a building that is fully integrated into the natural environment and that in a second moment can establish a relationship of unity with the future urban development planned for the region. 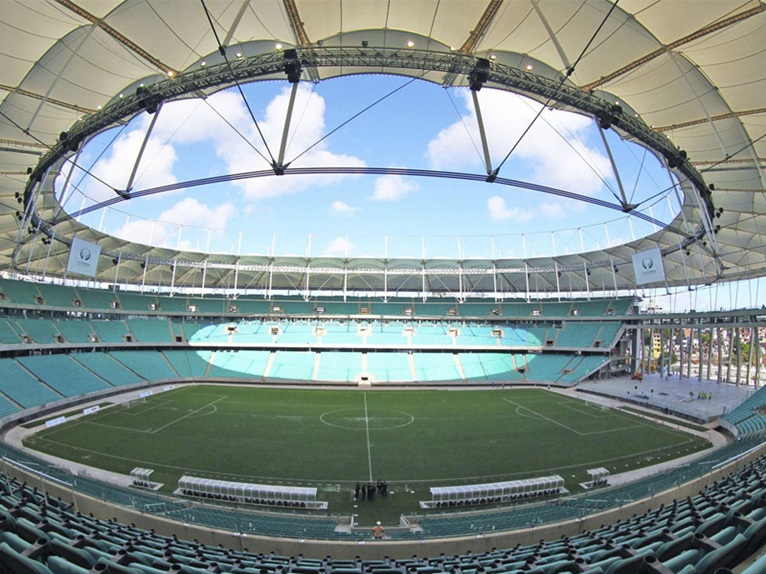 The stadium renovation in Salvador concerning the old Estádio Fonte Nova was much more radical that those of the Maracanã and the Estádio Nacional de Brasília. The old stadium was completely demolished after part of the upper terraces collapsed in 2007, killing 7 people and injuring several others. In its place German architects Schulitz Architekten have built the Itaipava Arena Fonte Nova from scratch, retaining only the traditional horseshoe shape, with a large opening to the south, but a modern design appearance. This stadium has not been without its problems either though. It was one of the few stadia to be completed on time but after completion it was found that there were some blind spots for spectators and a section of the roof collapsed after heavy rain. In this case though there was time to remedy the problems. 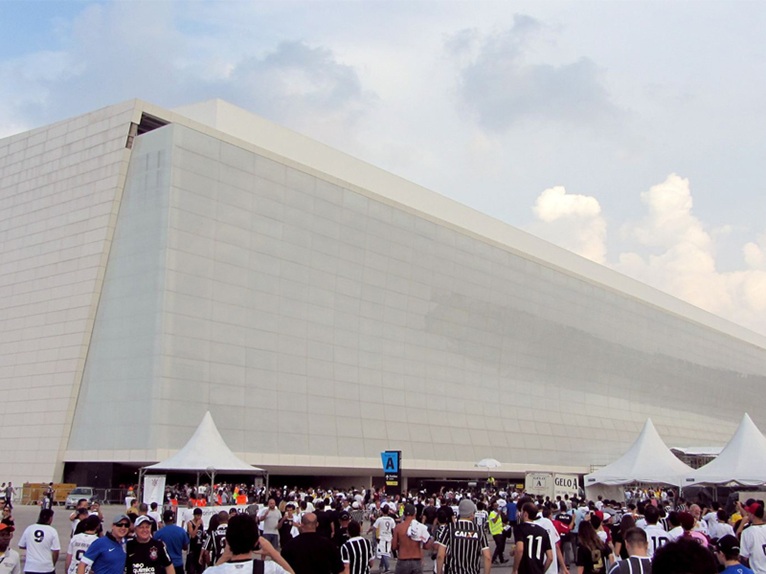 One of the most controversial of the stadia built is the Arena Corinthians or Arena de São Paulo as it will be known during the World Cup. The stadium has been shrouded in controversy from the moment it was suggested that São Paulo should build a new arena because the stadium originally selected to host the opening ceremony and match, the Morumbi stadium, was deemed unfit by FIFA. As the arena is owned by the football club Corinthians, many criticised the use of public funds to built it, although the government says that no subsidies were paid, just tax credits. The stadium was also completed over a year late due to construction accidents including the crane which collapsed killing two workers in November 2013.

Anyway now the stadium has been completed and will host the first match of the World Cup this evening. The stadium was designed by two Brazilian architectural firms DDG Arquitetura and Coutinho Diegues Cordeiro Arquitetos to be "a stadium that would help the supporters, that would help the team to win matches” in the words of Anibal Coutinho lead architect. The main characteristic of the stadium is its east side, which houses one of the largest video screens in the world, 170 by 20 metres (558 by 66 ft)—3,400 square metres (37,000 sq ft). The screen has 210,000 individual LEDs; 1320 custom made luminaires are fitted in 4 metres (13 ft) long glass sheets. The screen is manufactured by Osram Traxon, controlled by an E:cue lighting control.

Click here to see all the World Cup Stadia on Archilovers.