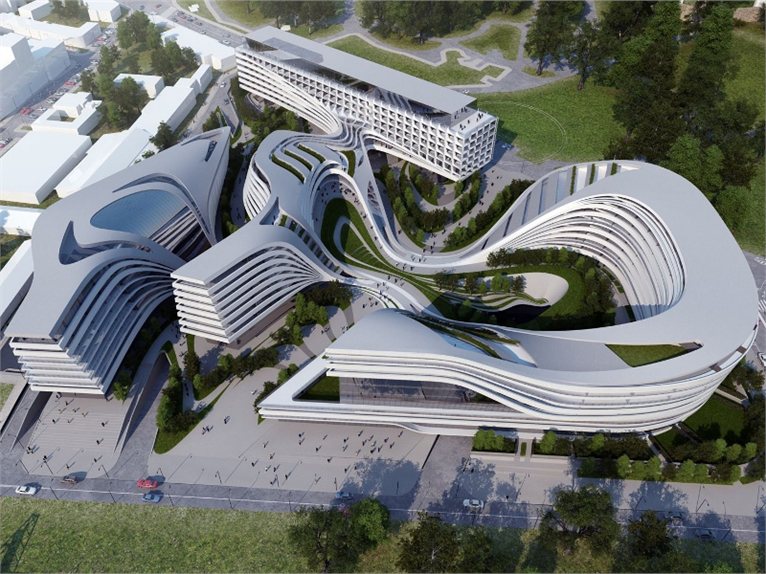 Our Friends at Belgrade Design Week have sent us some further information on Zaha Hadid's masterplan for the the redevelopment of a part of Belgrade where the former Beko textile factory used to be located: the BEKO complex Belgrade. It gives us the opportunity to make a quick review of some of the work going which has marked and is going to mark the continuance of Belgrade’s “Modernist” movement, which was abruptly discontinued in the 1980s.

The new multifunctional complex near Kalemegdan will attempt to awaken Belgrade’s spirit of modernism – the iconic style of the Serbian capital in the thirties, fifties and seventies. 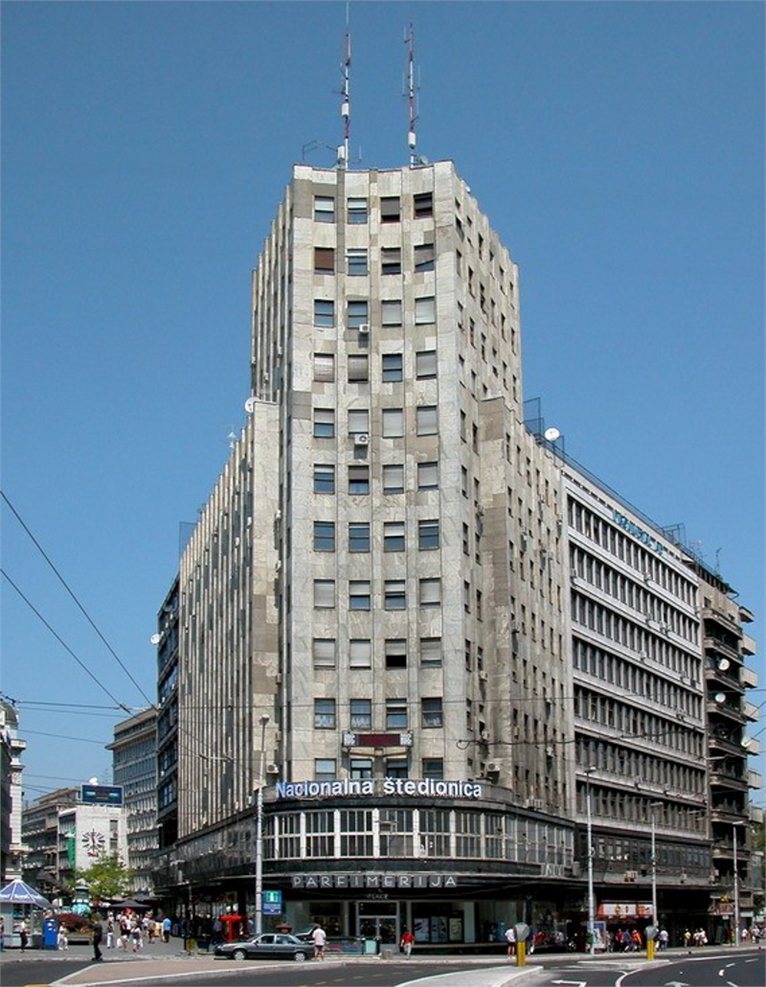 Each of these decades was marked by key buildings which are, to this day, the landmarks of Belgrade and the region: The iconic Albania Palace (pictured) and Radio Belgrade in the Thirties, the entire New Belgrade development with its crown jewel - the Palace of Serbia in the Fifties, Sava Center and the “25th of May” Sports Center in the Seventies… However, the death of Tito in the Eighties and the disintegration of Yugoslavia and the ensuing economic sanctions in the Nineties cut short the development of such a progressive spirit. 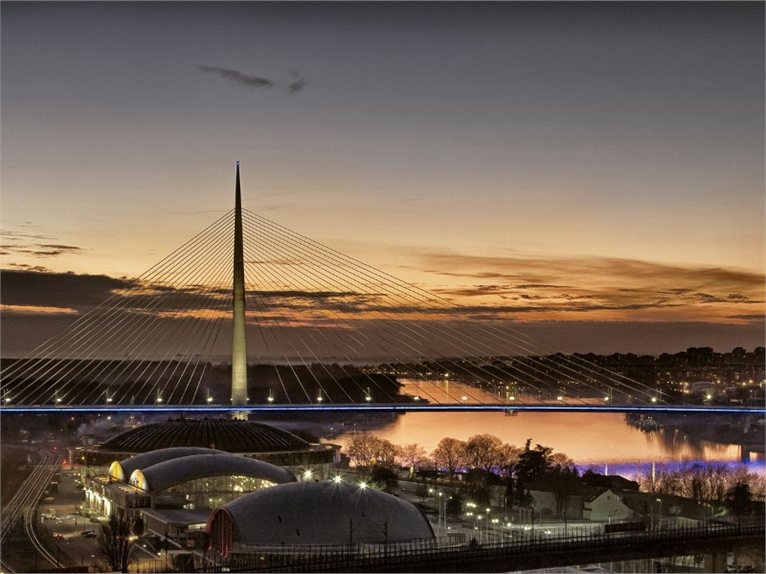 Belgrade went through a difficult period in the first decade of the 21st century trying to find its lost path, and now, with joint efforts of private and public investors, in the ‘10’s of the new millennium, the city is finally achieving an exiting momentum with first designs which are worthy successors of the famous modernist past, such as the Slovenian Architects Arhitektura d.o.o.'s Ada bridge (pictured above), Sou Fujimoto's Beton Hala Water Front Centre “Cloud”, the new “BEKO”, the “Center for the Promotion of Science”, the Zira, Falkensteiner and Square Nine Hotels, Wolfgang Tschapeller's the “Centre for Promotion of Science” and the new urban plan for the Port of Belgrade, the “West 57” development... With the new world quality contests, designs and built environment, Belgrade has also seen the return of leading global architects such Daniel Libeskind, Boris Podrecca, Wolfgang Tschapeller, Isay Weinfeld, Sou Fujimoto and last but not least Zaha Hadid. Santiago Calatrava has also been mooted as the architect for a new Belgrade Philharmonic.

Regardless of opinions about the commission of “starchitects”, Belgrade will become the first city in the South East European region to have a building designed by the arguably world’s most successful architecture studio at the moment: Zaha Hadid Architects from London, UK. A unique multifunctional complex at the location of the former Beko factory at the Danube riverside, jointly with the proposed “Cloud” by the Japanese architect Sou Fujimoto on the adjoining Sava waterfront (see render below), will mark the revitalization of an entire area key to Belgrade’s development and history – the Confluence waterfront crescent from Small Kalemegdan to Beton Hala. 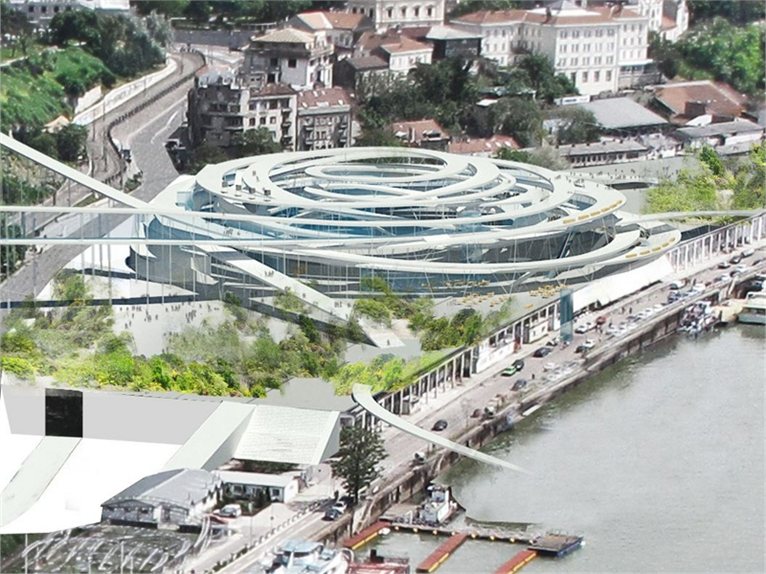 Poised to become the city’s new and happening center, the BEKO complex will cover the area of 94,000 square meters and include cutting edge residential spaces, galleries, offices, a five-star hotel, a (much needed for Belgrade) state-of-art congress center, retail spaces and a department store… The residential part will consist of top-quality finishes and building systems and the complex will also include a huge underground parking lot, maintenance service and security. The project is designed as a complex which offers a complete variety of services to the users who live or work there, to hotel guests and visitors. The immediate vicinity to the confluence riverside, with the pedestrian connection to the "Cloud", will contribute to never before seen residential conditions in Belgrade, almost comparable to seaside marinas. In fact, this currently abandoned part of the city, will infuse a completely new life to the historical quarter of Dorcol - daily visitors, residents and tenants will be able to walk from the modern complex by a new planned bridge to Novak Djokovic’s adjacent tennis club and all the other recreational contents of the 25th May Sports Centre and then continue the pedestrians and bicycle paths to the restaurants and bars in the Beton Hala and Savamala area.

The Greek company Lamda Development bought the BEKO factory building and the plot in 2007, for EUR 55.8 million at a public auction.

“The site on which we will soon begin the construction is currently a black spot on the map of Belgrade, even though it is only 500 meters away from the city center – it is currently not used and completely inaccessible. Our intention is to reactivate this important but neglected part of the city. Hence, the development will not only provide new and exciting living quarters but a whole new urban center, a new destination and a new city landmark suitable for leisure, working, tourism, commerce and culture. We find the location priceless and that is why we hired the best - Zaha Hadid Architects – to create something truly exquisite and unique…The complex is inspired by a fluid form underlining the natural beauty of the location, and it takes into account all aspects of the rich and layered history of the site and aiming to complement and work with the existing spatial and historical environment. Our objective is to enhance this part of the city and to give it a new purpose, but at the same time to keep its spirit and culture, develop and improve the surroundings around the iconic fortress, as well as to make the infrastructure of this part of the city stronger. The view from the castle to the 25th of May Sports Center will be open, and the ground level of the complex will include an newly formed open access pedestrian area, as clearly defined during the project planning. The ground level of the viewing corridor zone is fully given to the pedestrians, allowing free public flow through the site, finally opening the city towards the Danube bank. State-of-the-art materials and “green construction” systems will be used, which makes the building more expensive and prolongs the process, but on the other hand, it significantly reduces expenses for the future users of the complex. We intend to continue Belgrade’s signature “modernist spirit” with this modern complex”, said Zisimos Danilatos, the development manager at the Greek company Lamda Development.

Having in mind the complexity of the project, the new innovative materials and cutting edge systems which will be used during the construction, the total investment is expected to exceed EUR 200 million. From the beginning of the project planning to the realization of the project more than 2000 people will be involved, while the complex will permanently create about 1000 new jobs from all sorts of professions.

This complex will certainly set new standards in the Serbian and SEE market primarily living standards, but also in the field of architecture and construction. Considering several solutions by invited leading global architectural bureau, Lamda development finally chose the proposal by Zaha Hadid Architects. Thanks to the experience in constructing modern buildings in the vicinity of historic buildings and pushing the boundaries of architecture and urban planning, Zaha Hadid’s projects have become recognized all over the world. The main idea of the Zaha Hadid’s signature style, Parametricism, is introducing fluid forms into architecture, the forms and shapes existing in nature, in the flora and fauna. The buildings designed by Zaha Hadid transcend construction stereotypes: there are no rigid forms, no straight lines, no symmetry, no repetition, no standard function-based divisions of space. The buildings look different from every angle, the forms are round and fluid and the space is not segmented, it flows seamlessly from one room to another.

“We are delighted to be working on the design for BEKO. The project focuses on urban regeneration of an important site at the intersection of key cultural artifacts. The masterplan follows the region’s strong modernist traditions and has applied new concepts and methods that examine and organize the programs of the site; defining a composition of buildings with the elegance of coherence that addresses the complexity of 21st century living patterns. The design for BEKO is embedded within the surrounding landscape of Belgrade’s cultural axis and incorporates essential public spaces. It is absolutely critical to invest in these public spaces that engage with the city. They are a vital component of a rich urban life and cityscape, uniting the city and tying the urban fabric together”, said Zaha Hadid.

“Belgrade is a very inspiring and lively city. It is a point where energies of different people with different interests collide and merge, which is a great challenge for architects. It seems to me that it stands out in comparison with other cities in Southeast Europe with its great aspiration to enhance its appearance. I strongly felt this impulse and wanted to take part in this transformation. The hotel building will be highly representative and completely in accordance with “Parametricism”. I believe it will fit into the ambience exquisitely, because it is adapting global structures into the local ambiance that Zaha Hadid is trying to do through its projects worldwide. This is the reason why our buildings spring up in various parts of the planet, from Abu Dhabi and Cairo to Rome and London. The projects are always adjusted to the local conditions”, said Patrick Schumacher, Partner at Zaha Hadid Architects, during his presentation at Belgrade Design Week 2012.