This brave proposal held highest emblematic potential among all of Beton Hala entries. It offers a brave, iconic structure which skillfully blurs the difference between urban and architectural scales and spaces. Proposed spaces enter a complex dialogue with historic assemblage of Kalemegdan Hill, respectfully juxtaposes its cutting-edge 21st century space against the layered past of its context. Static spaces of the platform, which houses bulk of architectural volume of the scheme, are contrasted against the suspended flux of ramps, which offer public spaces of a novel type, rich spatial configurations of encounter and surprise. CLOUD 21st century hub is akin to a cloud where continuity and totality co-exist. Our proposal, Beton Hala Water Front Centre is a cloud-like hub, which connects Beton Hala, Fortress, Kalemegden Park, Sava river, the ferry terminal, tram, bus and urban district, unifying commercial and exhibition spaces as a whole. The centre plaza shaped by the bridge connects the surroundings. It marks in a historical moment, as cloud of the future, regenerating from the border of white castle wall (past), to a new relation interrelating with the surroundings. RING BRIDGES – Cloud connected to the surrounding environment The bridge, expanding to the surroundings is a continuity from the historical building (castle wall - Beton Hala), the natural environment (Sava river, Kalemegden park), to transportation (bus, tram, ferry terminal). At the heart of the site is articulated by the ring shaped bridge, extending from the surroundings, allowing a smooth access to the commercial and exhibition spaces The ring shaped bridge also plays a key part in Belgrade as an observation deck, providing a breathtaking panorama. A spiral form unifying various surroundings. A ring representing Serbia. CLOUD SQUARE – A transformation from the castle wall border to a cloud of continuity and totality. What kind of space best responds to the site where in the past and present existed the white castle wall as the border and now disappeared? Our proposal is a unified space with various activities interacting. It is a cloud-like space, with continuity, territoriality and no clear border. CLOUD SQUARE, being Serbia’s symbolic figure, it brings together various situations from the past to the present of Serbia. FLOATING SPACE – Floating cloud providing a comfortable environment With the hub floating off the ground, comfortable places rich in diversity are created, such as a space floating on water, and along forest and a floating restaurant. Floating at various levels, the bridge allows multiple views. To ensure safety and comfort of the floating space, distance is kept from the trains and trams on the ground level. A space of diversity, a road with choices. ALONG LANDSCAPE –Cloud along the landscape in response to the view The overall form follows the landscape to respect the view from the Sava river to the castle wall. In addition, placing the parking underground and keeping the height of the building above ground low, a smooth continuity of the dynamic landscape from the site to the castle is maintained. BIG ROOF – The relationship between Beton Hala and cloud A new plaza extends like a ring shaped big roof above the historical building of Beton Hala, horizontally expanded along the Sava river. The new façade generated in this site, roots from the cloud floating above Beton Hala, the historical building and various activities. PROGRAM ZONING The large parking is placed underground and exhibition space is above ground (exterior exhibition space partly at the bridge level). Furthermore, the commercial spaces runs from above ground to the bridge level above. In the plan, the commercial spaces are located on the urban district side to allow more access from the street. Restaurant and café are on the Sava river side, up in the air to provide comfort. The exhibition space is on the Kalemegden park side, to maintain tranquility. Outdoor exhibition is located near the waterfront, the whole ring envisioned as an exhibition space. FLEXIBILITY Pedestrian space is enriched by numerous rings allowing choices. Diversity is given to the hub with the street along Kalemegden park, the street beside the trees, the street along the Sava river, the street close to the waterfront, the street along Beton Hala and the street along the urban district. FLEXIBILITY By Organising each of the programs around a ring, one is able to view the entire facility from the central arena. The composition exercised here is not one where the entirety of the programs occur within a closed building, but rather one which opens up to the surroundings equipped by transparency. ENCIRCLING The passages and routes unfold through the ring, this enables smooth transition of each programs, and constantly being exposed to the surrounding, you can never get lost when it is in use. SAFETY By lifting the rings above the ground-plane, the vehicular/transport environment and the habitable environment are subtly separated, presenting a pleasant safe space to stay. As a result, enhancing the mobility of the transport networking through and surrounding the site. UNITE The entirety of the Waterfront Center is a coalescing bond of program and bridge in the form of a ring, the central arena is lucidly harnessed and is united to make up the whole. Diverse matters, people and information has been manifested in unity, the very reason which will bring to this place, celebration and dynamism. Authors: Sou Fujimoto Architects, consultant Ove Arup Japan.
11 users love this project 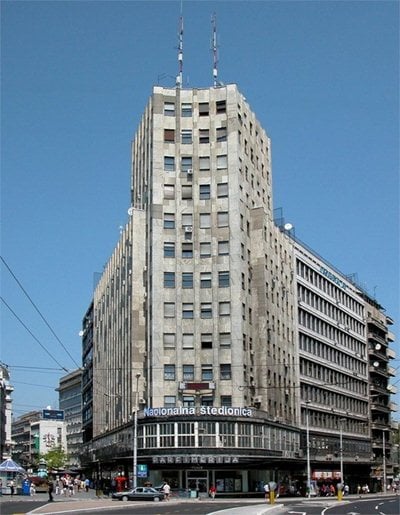 The BEKO commercial-residential-business-exhibition complex in Belgrade

This brave proposal held highest emblematic potential among all of Beton Hala entries. It offers a brave, iconic structure which skillfully blurs the difference between urban and architectural scales and spaces. Proposed spaces enter a complex dialogue with historic assemblage of Kalemegdan Hill, respectfully juxtaposes its cutting-edge 21st century space against the layered past of its context. Static spaces of the platform, which houses bulk of architectural volume of the scheme, are...