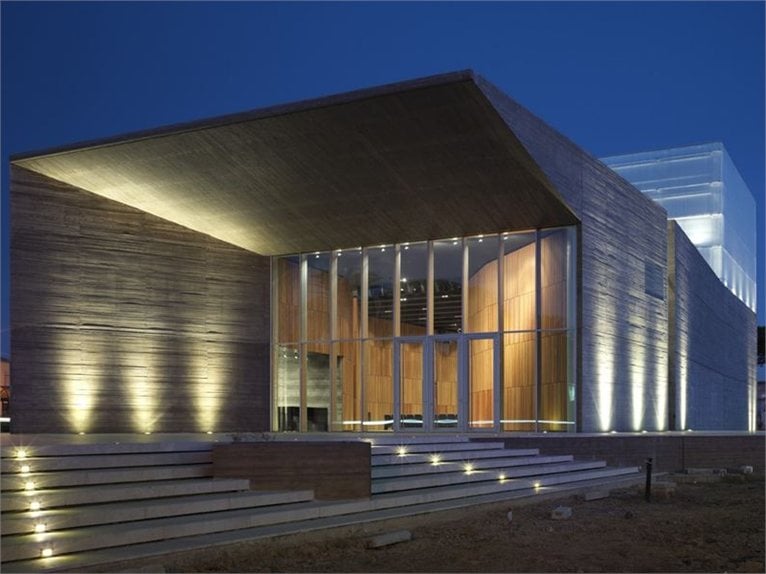 Prato design office MDU architetti's project for the new Municipal Theatre of Montalto di Castro was created with a twofold objective: acting as a conceptual model for measuring the area and at the same time trying to express architecturally the charm exercised by theatre on the spectator.

The origins of the territory of Montalto di Castro, whose remains bear witness to an architecture of great stereometric tuff stone masses, dates back to the Etruscan period, however, in the collective contemporary imagination Montalto di Castro evokes the world of the machines of the largest Italian power station.

The project proposes a temporal short-circuit with respect to which the evolution of the territory is concentrated and expressed in a single architectural moment: Etruscan antiquity versus machine aesthetics.

The new theatre is a large concrete monolith characterized by slight variations in colour and texture, where the scenic tower appears to rest ethereally: a polycarbonate volume that dematerializes by day mingling with the sky and, by night, lights up from the inside and transforms into an enormous “lantern” visible from all over the territory.

A new travertine square, conceived as a departure of the route of the access road to the historic centre, leads to the entrance of the New Theatre identified by an impressive cantilevered roof. Through it, the spectator is introduced into a continuous environment where the foyer and stalls flow freely into each other. The wooden walls create a space that is conceptually derived from the excavation of the concrete monolith. Apart from the stalls for 400 people there is also an outdoor arena for 500 people who can thus enjoy the theatre stage.