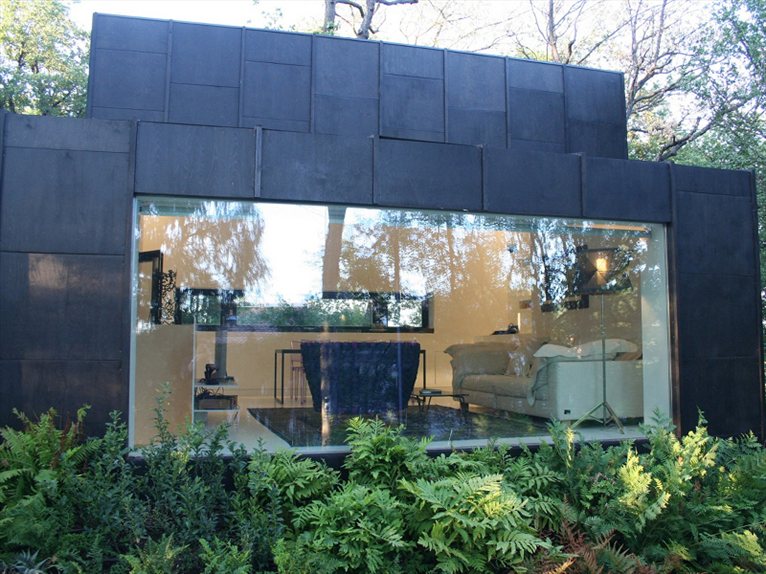 The Guest House designed by Enrico Iascone Architetti is a small house, built within the grounds of a larger property commissioned with the objective of adding a guest house to the manor house. The room has been created by demolishing a previously existing building used as a tool store, creating the new building within the existing walls.

A careful use of the natural layout of the land, characterised by the presence of outcrops of chalk layers with significant differences of level, has permitted the recovery and the exploitation of a new basement volume, with a large window used as a bedroom. The project area, in a hilly zone, is in a garden, in a small wood, and is characterised by a thick Mediterranean scrub area with oak, ash and maple trees which give the context a precious natural look.

All the structures have been made of wood, including the external cladding, with the exception of the bearing structure of the underground areas for which reinforced concrete was used. The choice of wood expresses the will to seek a link with the context and this is reinforced by the choices of colours which completely blend the volume in with the trees.

The “skin” of the building has been created with birch panels, jointed to the main panel with parallel ribs, treated and painted in autoclave, fitted on a wooden planking support, necessary for fixing the cladding and creating a ventilation chamber. On the wall of the ventilation chamber there is a high density pressed wooden fibre insulated panel which has been made impermeable with a latex treatment externally. Under the latex panel there is the insulated part.

The transparent parts are on the front facade, eyelets which respect the pitch and the dimension of the panels, whereas the lateral sides there are large windows. The living room mainly faces south, where there is a large window towards the manor house, creating a visual contact with the latter directly opposite; other cuts have been studied in order to simply give privileged views of the wood, like the window on the north side and the small eyelets on the east side visible from the kitchen. The window and door frames have been made with high quality wood with dual chamber and triple glazed windows.

Inside the building is extremely simple, on the ground floor there is a small living room with a kitchenette and downstairs there is a guest room with a bathroom and a small services room. The choice of the internal areas has been dictated by the will to assign the ornamental and decorative element to the outside nature by using simple and basic elements for the internal finishings like the white resin of the floors, of the room and of the iron parapet.

For the outside, blocks of chalk have been used coming from site works for the containing walls and to fill the difference in level between the entrance and the rear of the building.

This project has attempted to achieve the objective through the use of eco-compatible material like wood. The orientation and thus the natural lighting and ventilation have also been improved.