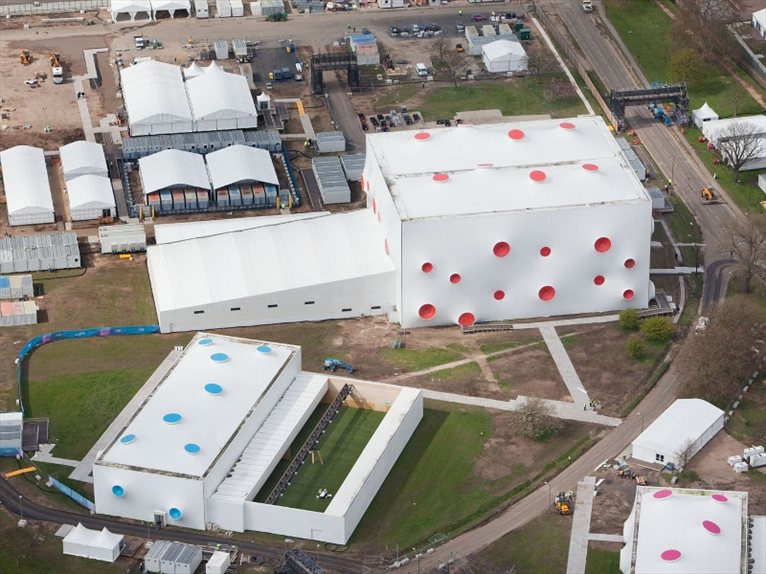 A city undergoing a complete face-lift, above all thanks to the now imminent Olympic Games. This is London, that 64 years after its last Games, once again hosts the event that the whole world anxiously awaits.

While the 14th Olympic Games, following a 12-year hiatus caused by World War II, encompassed the spirit of “rebirth” and “liberation”, the 30th Olympic Games has been described as “the cry of joy of a broken record: London is now the most exciting, cosmopolitan brilliant and changing cities in the world”.

The early years of the twenty-first century has seen London become the most ambitious and innovative metropolis in the field of architecture and for the 2012 Olympic Games it has been no different, with designers the calibre of Zaha Hadid, Michael Hopkins, Wilkinson Eyre and Populous being rallied.

Zaha Hadid Architects' London 2012 Aquatics Center is undoubtedly one of the most exciting Olympic structures. Inspired by the fluid geometries of water in motion, this giant “solidified wave”, costing 83 million euros, occupies the south-east portion of the Olympic Park and communicates with the neighbouring suburb of Stratford through a new pedestrian bridge, the Stratford City Bridge. The structure, designed to accommodate up to 17,500 spectators, has three pools (two 50-metre ones and a 25-metre one) inserted into a large “podium” that also contains services, water systems, and administrative spaces.

Hopkins Architects' London 2012 Olympic Velodrome, was the first sports facility completed in the Olympic Park. The structure is entirely covered with 5,000 sq. m of Canadian red cedar, while the base is made of glass walls that allow the public to see the Olympic Park and the London skyline from inside and show what is happening inside to the outside.

The London 2012 Olympic Stadium, designed by multi award-winning design firm Populous, provides the stage for the 30th Olympic Games. Promoted as an example of “sustainable development” for its possibility of being 'dismantled' and for the “minimum” amount of steel and concrete used, it is a nearly 300 meters long and 62.7 meters high structure known as the “Stadium Island” because it is surrounded by two branches of the River Lea.

Wilkinson Eyre Architects' London 2012 Olympic Basketball Arena, on the other hand, has the distinction of being the largest temporary structure ever built in Olympic history. 114x96 metres and 35 metres high. A flexible volume, cheap, quick to implement (just 15 months), removable and lightweight. From these needs, the cladding of the system was born, characterized by stretched PVC membranes that form a three dimensional curved surface inspired by bouncing basketballs.

Berlin's magma architecture, on the other hand, were responsible for the 'temporary' pavilions for the shooting competitions, the London 2012 Shooting Venue, by creating three buildings with a very playful look, covered with a shiny plastic wrapper, whose white dual membrane façade is interrupted only by bright coloured circular openings.

So the countdown to the Games has begun. The opening ceremony entitled “Isles of Wonder” takes place on Friday, while events will begin the day after. The renowned film maker Danny Boyle, director of films such as Trainspotting and Slumdog Millionaire, will transform the stadium into a green and pleasant British countryside. “Our Isles of Wonder - Boyle said - salutes and celebrates the exuberant creativity of the British genius in an Opening Ceremony that we hope will be as unpredictable and inventive as the British people”.