Located in an old industrial setting in Elefsina, Aktina* constitutes a stand-alone power station that harvests solar energy to recharge electric bicycles and personal devices. Fostering both the idea of alternative mobility and the vision of a new productive urban furniture, it serves also as a self-sustained info and wi-fi point. The AKTINA* proposal suggests the distribution of small-scale stations in the urban field. This network of interconnected elements is addressed to all citizens, by contributing to the enhancement of their everyday living and looking forward to a condition of urban sustainability - that is alternative mobility and green energy production. A beta unit is launched within the framework of Aeschylus Festival 2012, to test its independent production capabilities as well as to measure its social impact. This festival is a large cultural event in Greece that attracts people with various backgrounds. The main goal is the familiarization of the visitors with the notion of renewable energy resources and the new perspectives they bring forward, such as the notion of alternative mobility and public service, as well as the new kind of productive urban equipment. In order to adapt to the festival context, the design of AKTINA* is flexible and transformable and aims at calling the festival visitors for participation, interaction and reflection towards various directions. Therefore, the form is intentionally as neutral and generic as possible, so as to allow for different space arrangements. In particular, the neutral shape of the ‘square’ has been selected, not only as the main plan configuration, but also as an element of the plan and elevation subdivisions. It is maintained that this design decision renders the pavilion a 'spot', a unit in space, which can be easily re-configured in different positions within the festival venue, but at the same time it can be considered as part of a potentially larger group, a network/ecology of multiple power stations dispersed in the urban field. The dimensions of the pavilion are 3m*3m*4,5m and its architectural design is characterized by the combination of two distinct structural systems. 1) The first system refers to a fixed, rigid structure which consists of four metallic vertical pillars, bound together in three levels: at the level of the base, of the ceiling, as well as of the top surface which consists of six photovoltaic panels. This last plane, in contrast to the other ones, forms an angle of 20 degrees with the main structure, so that the panels can absorb a considerable quantity of solar energy. 2) The second system is constituted by a multitude of independent, distinct cubes, the dimensions of which are 40cm*40cm*40cm. These can be used in multiple ways and configurations, either as single units (i.e. as seats, bench units, planting pots) or as multiple cube entities (i.e. info point, bar or sitting area and projection screen etc). Every cube lacks one or two opposite sides so that it can be smartly assembled with other cubes, as well as for the reason that its internal part can be easier used, i.e. as storage, as a lighting bulb etc. This second structural system of the pavilion is characterized by flexibility, transformability and interactivity; it can adapt its form with respect to the current user intentions and wills, by supporting the deployment of different scenarios. The vision of AKTINA* project is its expansion on the urban field of Elefsina or other cities, towns and settlements of Greece, so that intervention networks can be created: a new urban furniture that contemplates the existing one with productive green energy units. Moreover, the topography of the country, which does not favor the smooth use of ordinary bicycle, as well as the high amount of sunshine, are major arguments that might support projects such as AKTINA* as ideal solutions for the Greek paradigm. In this context, the AKTINA* project is an ongoing process of design, research and experiment, a challenge for the team, in collaboration with the local authorities and investors. A project by the architecture lab City Index in collaboration with Energize, Eirini Vouliouri, Mariza Papaeugeniou and Vasileios Ntovros.
13 users love this project 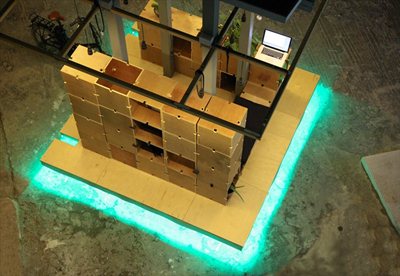 Located in an old industrial setting in Elefsina, Aktina* constitutes a stand-alone power station that harvests solar energy to recharge electric bicycles and personal devices. Fostering both the idea of alternative mobility and the vision of a new productive urban furniture, it serves also as a self-sustained info and wi-fi point. The AKTINA* proposal suggests the distribution of small-scale stations in the urban field. This network of interconnected elements is addressed to all citizens, by...