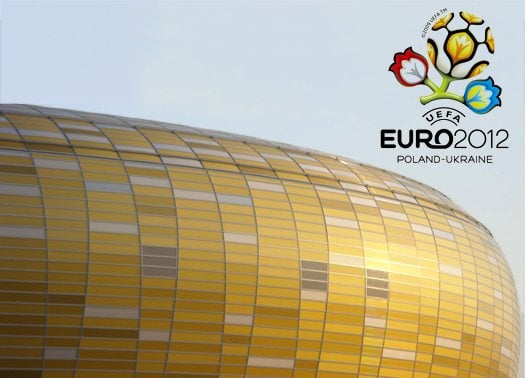 In spite of the controversy outside and inside the world of Sport, the 14th edition of the European Football Tournament officially starts in Poland and the Ukraine. Each country has prepared 4 structures suitable of hosting the final phase of the European Championships. The 14 qualifying countries plus the two host countries (Poland and Ukraine) have been divided into 4 groups of 4 with each group playing matches in 2 stadia either built especially for the competition or significantly modified.

Croatia, Italy, Spain and the Republic of Ireland will be playing their group matches in Poland. The Group's first match, and probably the most eagerly awaited, will be between Italy and Spain on Sunday 10th June at the PGE Arena in Gdansk, considered by the press as one of the most elegant and modern in Europe and purpose built by German architects RKW. The shape and golden colour of the roof recall ambra crystals which Poland is famous for, while the elements of its structure recall the cranes of the shipyards, one of the City's symbols.

Italy's other matches against Ireland and Croatia will take place in the Miejski Stadium of Poznań, a stadium completely constructed on the same site where the previous one built in the 1970's stood. Modern Construction Design Sp. z o.o., headquartered in Poznań, designed the special roofs for the grandstands, which look like a natural silk cover for the whole structure giving it a pleasant plasticity.

In the other groups England and France will be doing battle in two different stadia: the big matches in the group between England, France and Ukraine will all take place in Donbass Arena in Donetsk, Ukraine, designed by ARUP, while Sweden will play all their group matches in the Olympic Stadium in Kiev, reconstructed by the German architects gmp Architekten.

One of the semifinals will take place in the national stadium in Warsaw, once again rebuilt by gmp Architekten, which will also host the opening match of the Tournament between the co-hosts Poland and Greece as well as the opening ceremony. Kiev will have the honour of hosting the final in spite of the fact that UEFA had manifested great perplexity regarding the Ukraine structures (and infrastructures), indeed the four Ukraine stadia (Donetsk, Leopoli and the Metalist stadium in Karkiv, where the Netherlands and Germany contest the big match in Group B, as well as that of Kiev) have been confirmed "with reserve".

However, when Uefa accepted the joint bid of Poland and Ukraine ahead of firm favourite Italy in 2007 (at a time when Italy was going through a period of fan violence and a match fixing scandal – that sounds familiar!) they knew what they were letting themselves in for in terms of infrastructural problems. Apart from Warsaw, Kiev and maybe Krakow, none of the other cities had much experience of welcoming masses of visitors for a long period of time. After their visit to the two countries, UEFA delegates publicly complained about the poor infrastructural connections for the long distances which reach up to 2000 km between the two Eastern European countries. Then, Uefa chief Michel Platini recently denounced that “bandits and crooks” were hiking hotel prices in Ukraine to sky-high levels for the Euro 2012 Football Championships and this hasn't helped to quell the doubters.

However, if we consider the recent history of these two countries, we can put into perspective the enormous efforts undertaken to bring this premier European sport competition for the first time to Central-Eastern Europe. This progress is highlighted well by the stadium which has been chosen for the final, the Olympic Stadium of Kiev: when it was built in 1923, the stadium was dedicated to Trotsky, indeed the year before, after years of struggle, Ukraine had been annexed to the USSR. Now though, Europe has changed and to forget about the crisis (which is perhaps, less obvious here) for a short while, we can concentrate on something slightly less serious like football to the surreal rhythm of the Euro 2012 anthem.