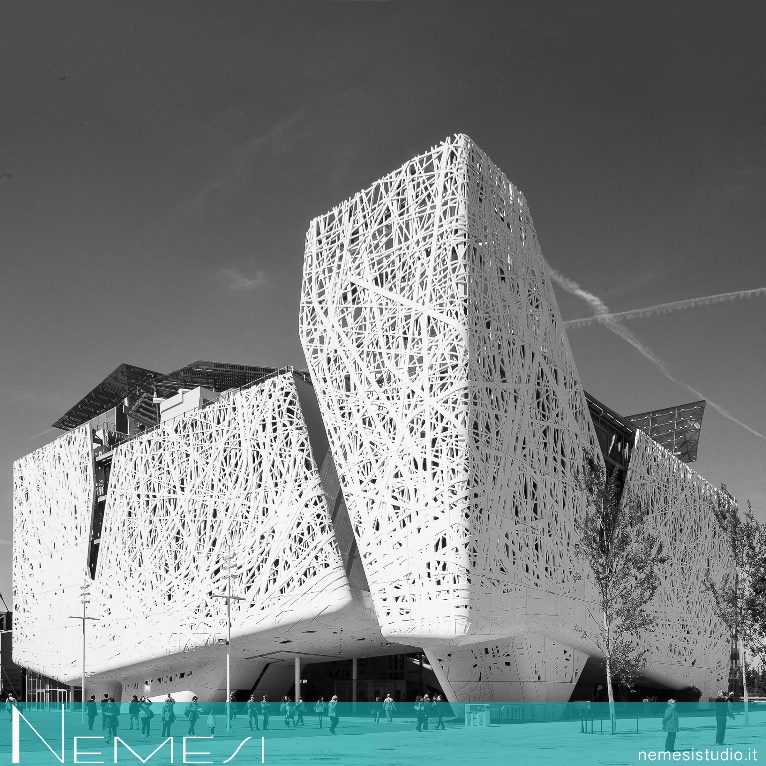 Italy Pavilion at Expo Milano 2015  designed by Nemesi: the full 9,000m2 of the façade of Palazzo Italia is clad in more than 700 i.active BIODYNAMIC concrete panels with Italcementi's patented TX Active technology. When the material comes into contact with light, it can "capture" pollution in the air, transforming it into inert salts and reducing smog levels. The mortar used is 80% recycled aggregates, including scrap material from marble quarries in Carrara that helps add more luster than in traditional white cement. This new material is also very "dynamic", enabling the creation of fluid designs like the complex shapes used for the panels that are part of the construction of Palazzo Italia. 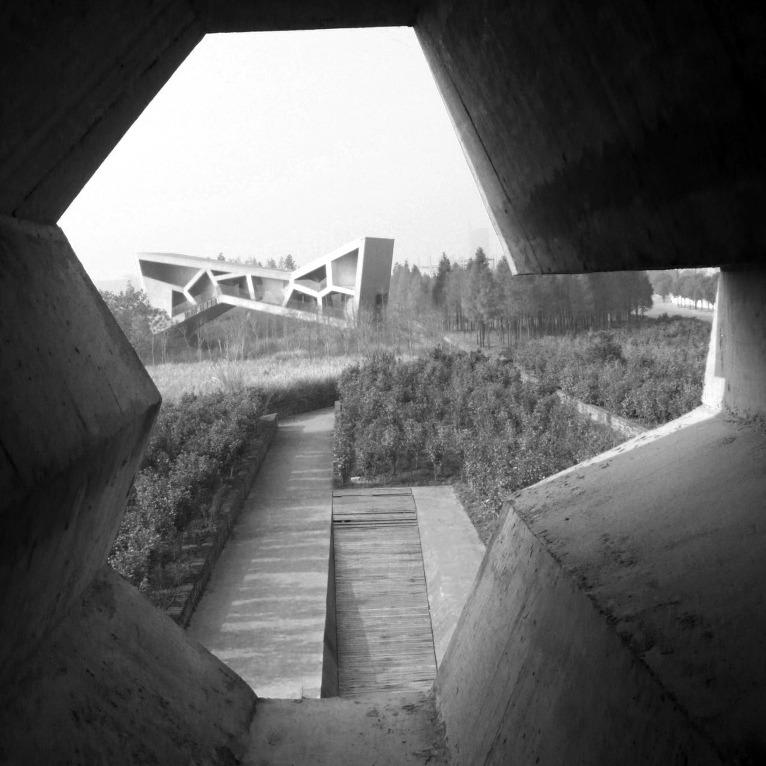 Fernando Romero and HHF Architects in Jinhua Architecture Park (2002-2006). Though not built for a World Exposition, the seventeen structures here share that revolutionary intent (and seem to me to fit in the canon of expo pavilions more than most of the propaganda-halls of Shanghai Expo 2010 [2]). Planned and curated by dissident artist Ai Wei Wei, each pavilion represents a new path forward for architecture, at least in the mind of the designer. 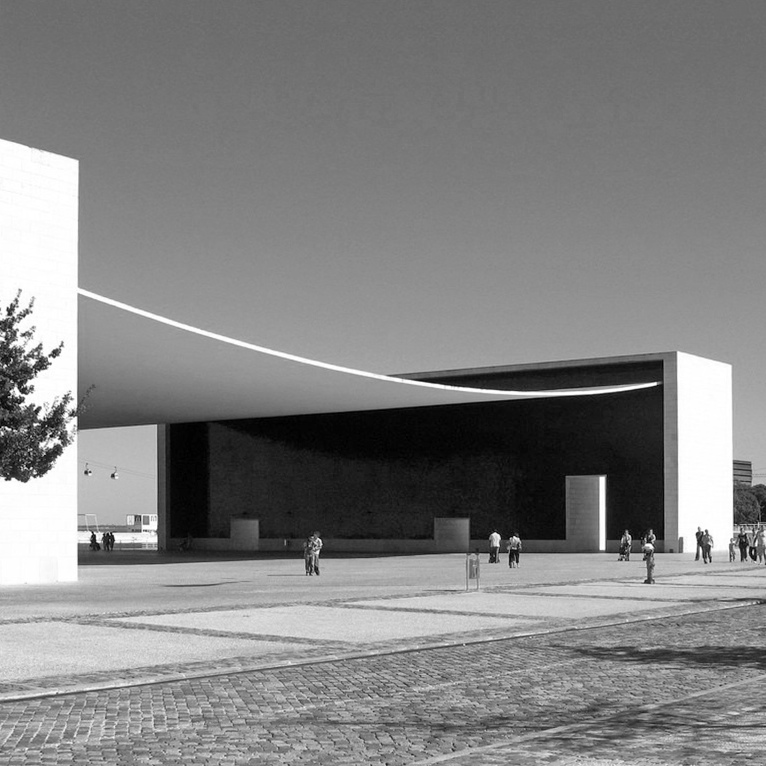 At the Expo ’98 Álvaro Siza Vieira designed Portuguese National Pavilion: structure and architectural form work in graceful harmony. Situated at the mouth of the Tagus River in Lisbon, Portugal, the heart of the design is an enormous and impossibly thin concrete canopy, draped effortlessly between two mighty porticoes and framing a commanding view of the water. 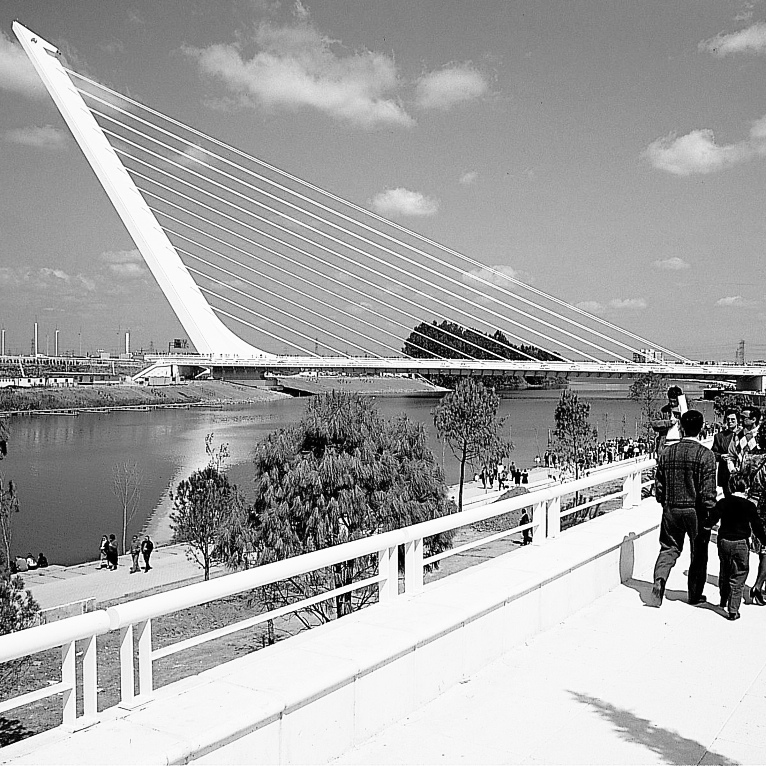 The Alamillo bridge over the Guadalquivir River was designed by Santiago Calatrava as part of infrastructure improvements for Seville Expo '92, was built more as a monument rather than a piece of structural art. Calatrava's Sundial Bridge at Turtle Bay in Redding, California (2004), and Jerusalem Chords Bridge are similar in design to the Alamillo Bridge. 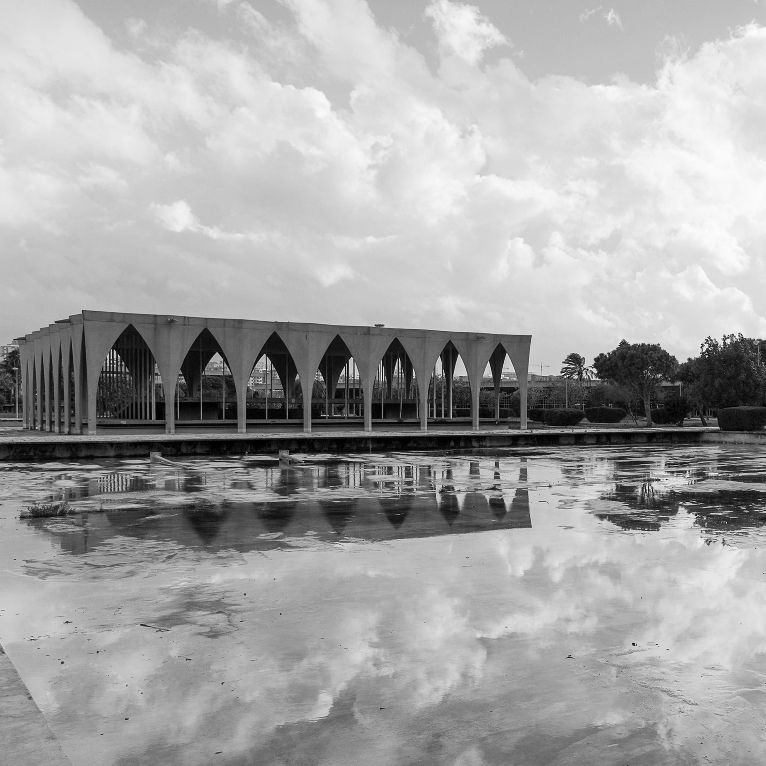 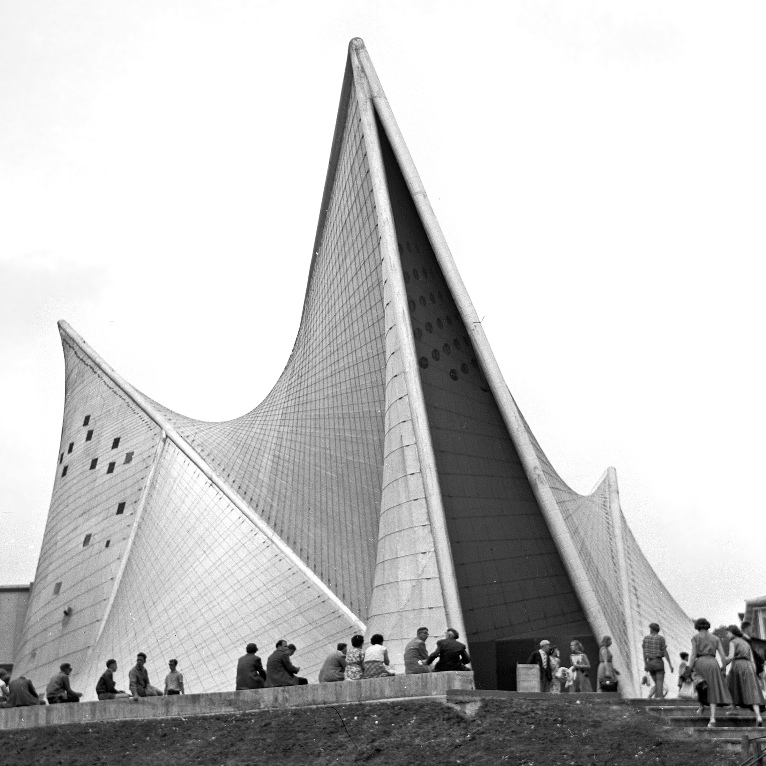 The Philips Pavilion was a World's Fair pavilion designed for Expo '58 in Brussels by the office of Charles-Édouard Jeanneret Le Corbusier. Commissioned by Philips, the pavilion is a cluster of nine hyperbolic paraboloids in which music, Edgard Varèse's Poème électronique, was spatialized by sound projectionists using telephone dials. 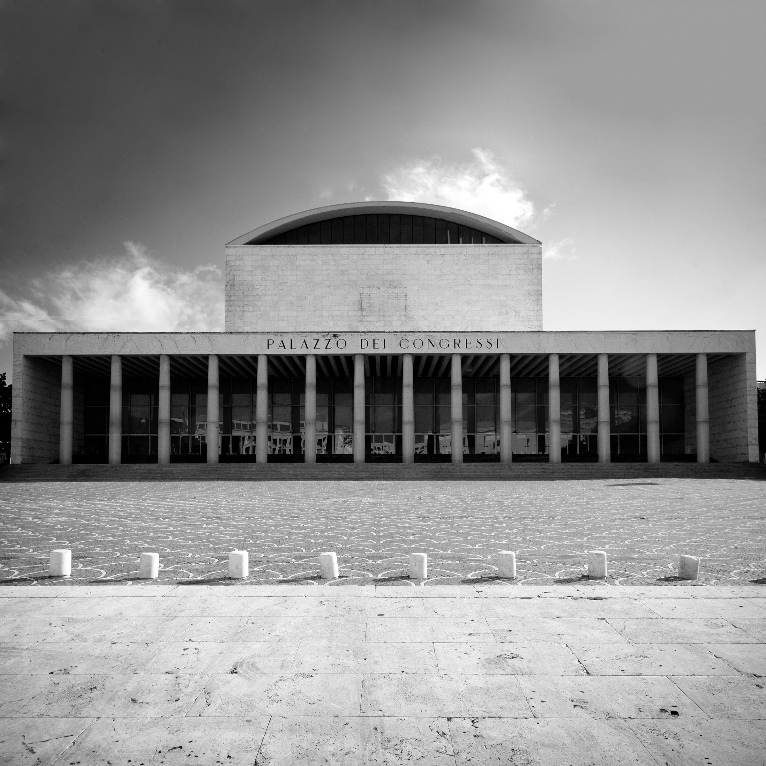 Palazzo dei Congressi, designed by Adalberto Libera for EXPO 1942: the construction in reinforced concrete of the building is completely masked by the wall covering in travertine, which gives the work the character of monumentality required by the Directives fascist. The area was originally chosen in 1930s as the site for the 1942 world's fair which Benito Mussolini planned to open to celebrate twenty years of Fascism, the letters EUR standing for Esposizione Universale Roma. The planned exhibition never took place due to World War II. 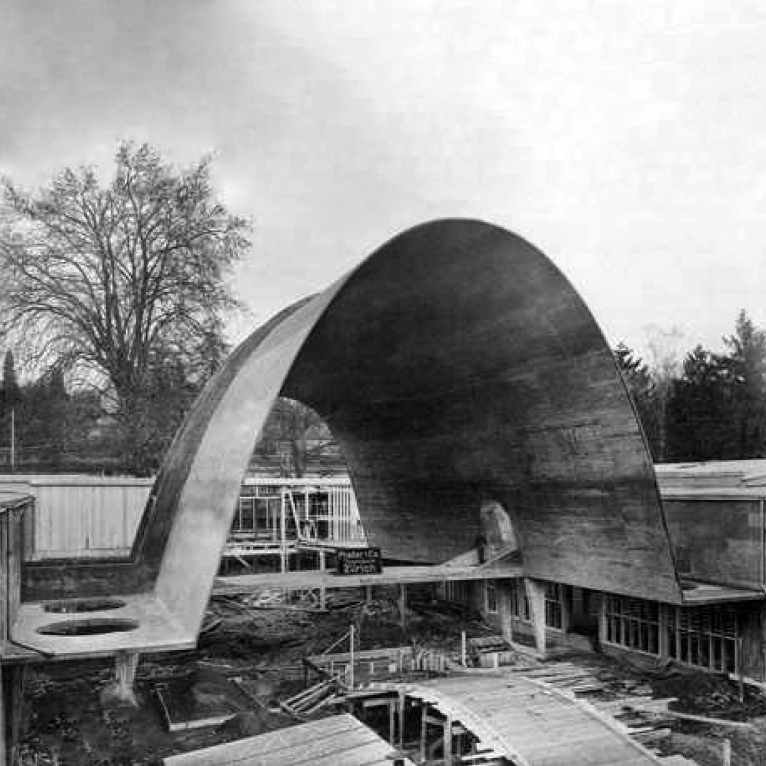 Swiss engineer Robert Maillart's last project is one of those structures that you wish still existed when you see historic photos of it. Together with architect Hans Leuzinger, he designed an extraordinary thin concrete shell as a demonstration project for the Swiss National Exhibition (Schweizerische Landesausstellung) of 1939, held on the shores of Lake Zürich (Zürichsee). 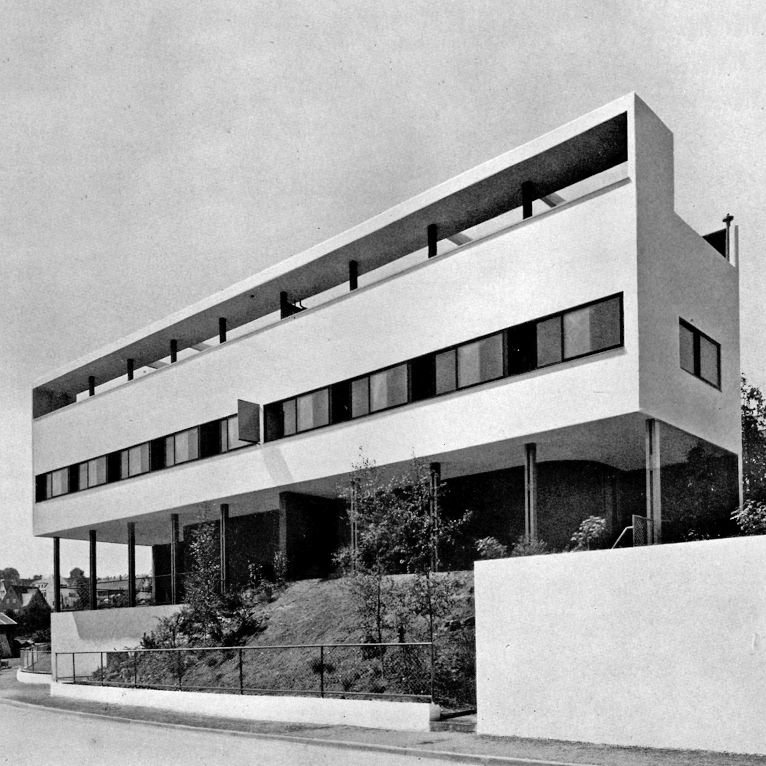 The Weissenhof is a housing estate built for exhibition in Stuttgart in 1927. It was an international showcase of what later became known as the International style of modern architecture and included twenty-one buildings comprising sixty dwellings, designed by seventeen European architects. The German architect Mies Van der Rohe was in charge of the project on behalf of the city, and it was he who selected the architects, budgeted and coordinated their entries, prepared the site, and oversaw construction. Le Corbusier was awarded the two prime sites, facing the city, and by far the largest budget.