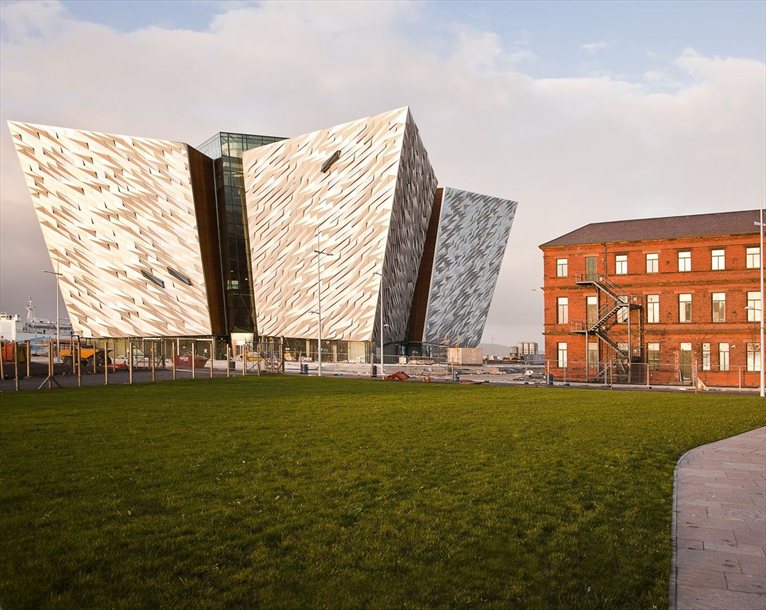 Titanic Belfast, the result of a collaboration between CivicArts/Eric R Kuhne & Associates and Todd Architects, opened its doors on March 31, 2012, just a few days from the one hundredth anniversary of the ship's tragic sinking. The building covers 14,000 square metres and took three years to complete (the same time as it took for the Titanic to be built) and has the potential of catering for up to a million visitors a year.

Belfast has taken a long time to tell its version of the story of the Titanic. It took almost a hundred years for the destiny of the “unsinkable” ship to be reconnected to the city where she was built. She was proudly launched from what was then one of the most important industrial cities in the world, built in the biggest shipyard in the world at the time (Harland and Wolff). However, less than two weeks after leaving home, on her maiden voyage, she found herself at the bottom of the Atlantic Ocean.

The new museum has been created on the same dock on Queen’s Island, a few yards from where the (in)famous ship was designed and built. Having rejected (fortunately) the initial options of in some way reconstructing the Titanic (even that of a scale model), it was decided to design an original structure which could also talk about Belfast, its industries and its inhabitants.

The shape of the building represents four ships' bows joining to form a star and develops into a sequence of quotations and allusions in a mixture of nostalgia, celebration and glorification of history. Titanic Belfast features nine interactive galleries which explore the places, sounds, smells and stories of the Titanic, but also the people who built her, the passengers who sailed on her and even the scientists who found her at the bottom of the ocean.

The new building stands out in the skyline of the future Titanic Quarter of Belfast. The masterplan of this new part of the city promises to create the Belfast of the 21st century, joining the residential blocks to commercial and cultural infrastructures, all mixed together with public parks, avenues and gardens. Titanic Belfast has been designed as the cultural linchpin of the system, giving shape to the desire to have a focalpoint for the site's heritage.