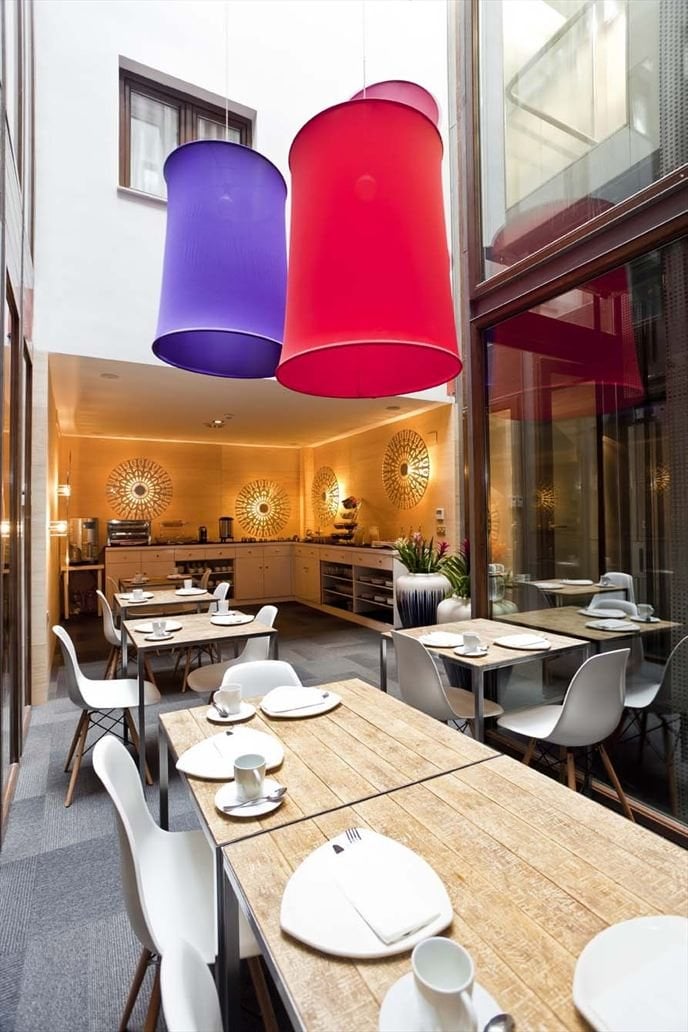 A hotel with a special character has recently opened in the characteristic district of Realejo in the centre of Granada: PORTAGO URBAN, the second Global Suites hotel. It is located in an old building which was previously used as a hotel but wascompletely renovated in 2011 on a design of architects ILMIODESIGN.

On the ground floor there are the common areas (reception, bar-café and breakfast area) and, the three floors include the 25 rooms and a fantastic terrace with a view over old town centre of Granada.

The strong urban identity of the hotel can be denoted from its name. The space is inspired by the figure of a typical English gentleman and combines with the informal and colourful atmosphere that can be enjoyed in this central district of Granada.

The characteristic ceiling of the entrance (which coincides with the café) welcomes the visitor with an element which becomes the common theme throughout the hotel: the bowler is no longer a simple hat, but is transformed into an element that, repeated hundreds of times, randomly and at different heights creates a moving environment. A second level created by the element which floats in the air and by continuous projections of light and shade, creates a dynamic image of this space.

Another particularity is made up of the great paved surfaces which contrast with the white ceilings for which strongly personalised colours, differing from zone to zone, have been chosen... “As if it were a cry in an open space. […] Using a highly coloured floor, the white surface stands out better, while removing the colour from the walls and ceiling, it shows up the plastic force of the floor. A cry of colour...”.

The lobby-café is dominated by a huge white monolithic curved Corian counter and on the wall behind it the following message appears: nice to meet you.

Then, there is the reception desk behind which there is a pile of old suitcases used as a decorative element. From here we come to the breakfast area, located in the lower part of an internal patio. All the rooms overlook this area making the patio visible from all sides. To make the atmosphere more welcoming, ilmiodesign has created large cylindrical lycra lamps with strong colours, limiting the height of the patio and have clad the walls in natural wood on which they have positioned wall lights which look like a shining sun.

The 25 rooms, all with a different layout are divided into three types and are customised by the use of different coloured carpets, different graphics and text messages carved into the headboards inviting inviting the guests to relax and enjoy their stay: Good night, Relax yourself and Sweet dreams.

A terrace at the top of the hotel is directly connected to the ground floor bar-café by means of a lift and provides an extension of it, offering a space where guests can relax and enjoy various breathtaking views of the city of Granada.