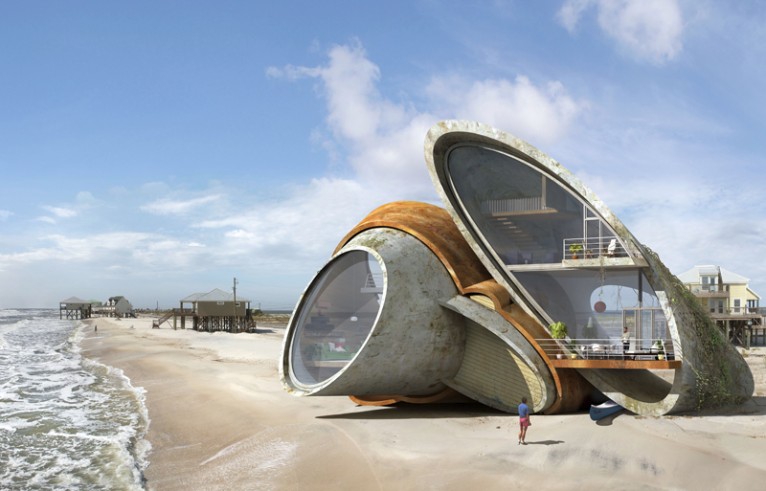 The contemporary art gallery Yusto/Giner hosted “Architecture for resistance”, the first solo exhibition of the artist Dionisio González (Gijón, 1965) in Malaga.
The exhibition has been structured starting from the series of photographs “Dauphin Island” and “Inter-Actions” plus an installation “Organograms”.

The fascination with architecture, a constant in the work of Dionisio González and his concern for social wreck lead him to a permanent search for sites where chaos and beauty coexist. 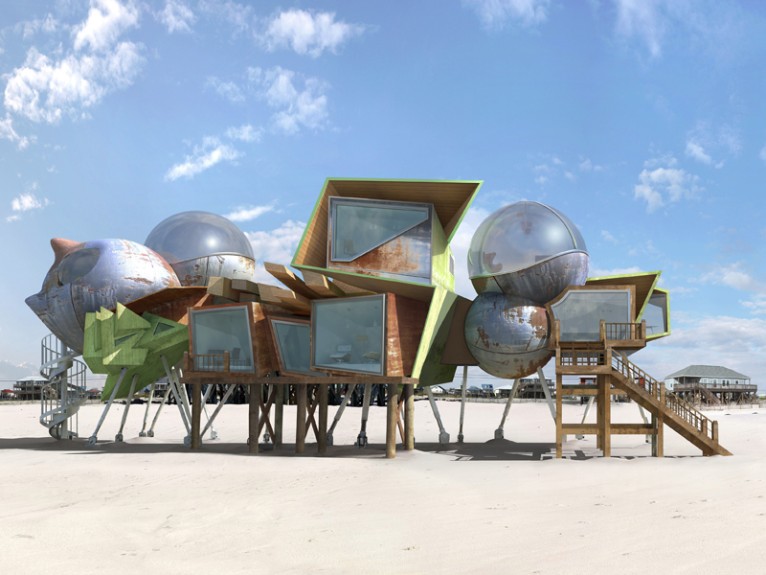 Dauphin Island, an island located in the Gulf of Mexico suffers the constant scourge of hu-rricanes, the artist was impressed by the energy of its inhabitants to recover what is cyclically destroyed by nature. Dionisio reflects on the acceptance of adversity and the bond esta-blished between construction and destruction, which he believes has generated constructive structures for the resignation. The economic insecurity and resignation to what they consider inevitable prevents the inhabitants of the island to invest in housing grounded in concrete, something as irresponsible as build nuclear plants in seismic areas or houses on the hillsides. 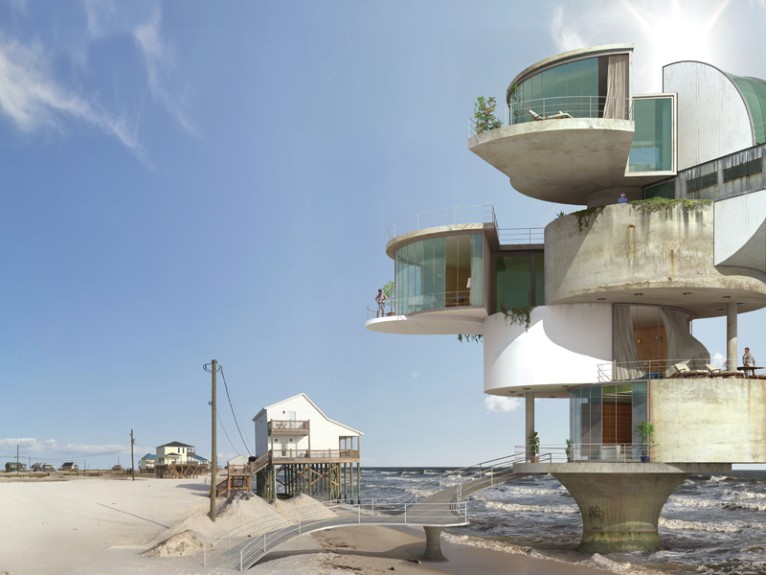 This helplessness to the climatic attack causes the artists intervention, leading him to design a project of habitable and sustainable architecture, real futuristic forts made of iron and concrete, replacing wood. An alternative that exists today only on paper on the island of Inge-nuity. The artist intention to provide answers to the problems of the world is rather rare in the world of art, since in most cases the artist limits himself to interpret or simply demonstrate its existence as a reporter or a notary.

Dionisio González reaches with his intention a level that exceeds reality and achieves a rather transcendental position while adopting a role close to a town planner, engineer and architect: of a creator who redesigns the established order changing the status quo. 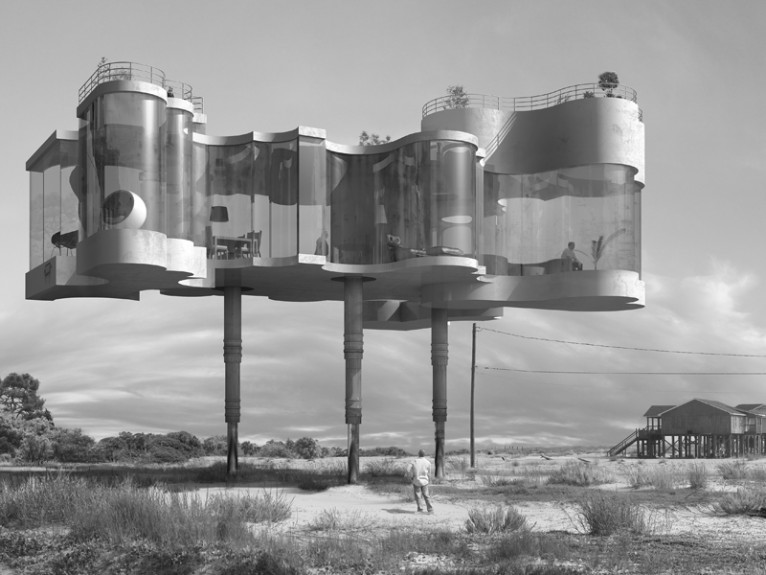 On the other hand, proposes “Inter-Actions” the relationship between humans and the environment and the use of natural resources by the inhabitants, in a series of fictional recreations of buildings grafted to the environment. 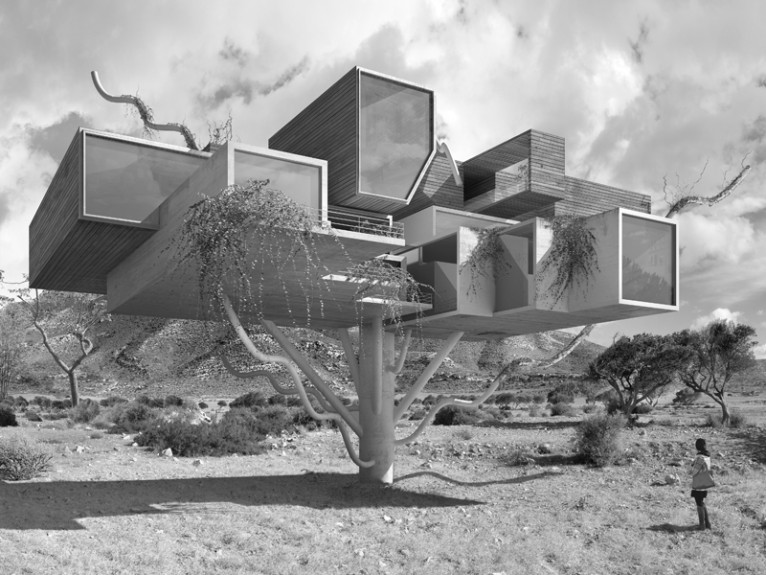 As a counterpoint to the natural environment Dionisio has created “Organograms” an insta-llation inspired by the contrast between the pace and the symphony that produce smoke and exhaust pipes of motorcycles in Hanoi (Vietnam) and the “Khene”, a Vietnamese traditional musical instrument. This “musical composition” is masterfully directed . . . by a robot. It is the first time that this work is exhibited in Spain. 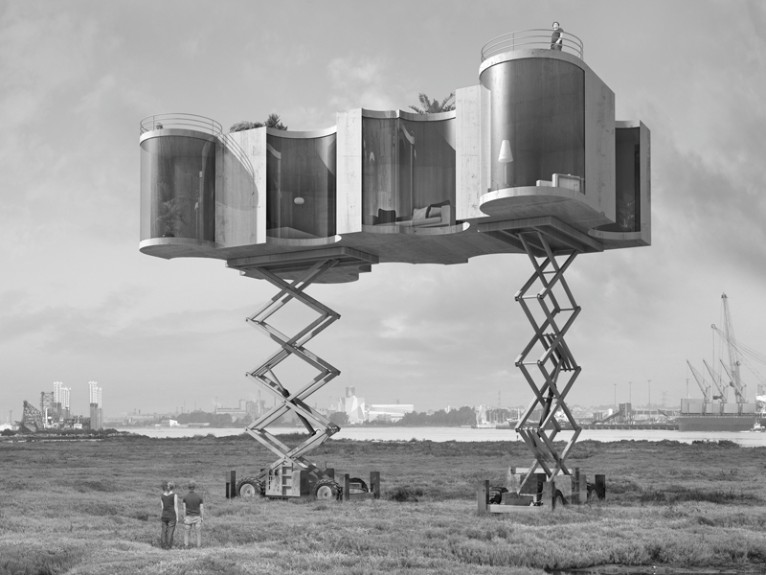 Dionisio González’s work is therefore presented as a way of understanding space in its non-architecture in order to study the mechanisms of adaptation to it, a kind of scientist, alchemist or wizard. A sort of good intentions