Dauphin Island is located on a sand bar. The Gulf of Mexico lies to the south of the island, and the Mississippi Sound and the bay of Mobile lie to the north. The island currently has a fixed population of 1200 inhabitants and is connected to Mobile by the hyperboloid Gordon Persons bridge – in an almost dreamed-of suspension. Even though it has several bird reserves, the main one is the Audubon Bird Sanctuary; it is the primary meeting place for the birds that emigrate to the north from South America and, as a consequence, many species can be found before they continue their journeys.

Mapped out by the Spanish explorers in 1513, the first French settlers called the island Massacre for the "mountain of human skeletons" they found. The island’s importance as a refuge and defence port was acknowledged, and soon “Isle Dauphine", as it was subsequently called by a great-great-grandson of Louis XIV and heir of Dauphin, became a bridge for the colonisation of the New World. Spanish and English created fortresses that protected the entrances to the bay, but it was the Americans who captured Mobile along with Dauphin Island in 1813 and turned it into a permanent fortification.

My interest in Dauphin Island comes from the study of aquatic architecture and pile dwellings originating in the Neolithic period. Before becoming interested in this location I planned to visit the Kampong Ayer district of Bandar Seri Begawan, the capital of Brunei. But the fact is that the architecture of Dauphin Island contains both a kind of humility, of servitude and of submission to a medium that make it typologically ambiguous. On the one hand the oscillations of the water and the relations with an unconsolidated or exposed environment mark the position and height of its buildings, and on the other hand the superfluity or the redundancy of many of its constructions make them magnetic, almost totemic, in an enclave contrarily envisaged for fishing and leisure.

There is a certain phantasmagoria in the non-holiday periods that make this enclave a hypnotic region, not only for the implicit solitude but also because the joining, the consolidation of the dwellings and their subsequent rejuvenation (the summit of elegant subtleties, vertexes and crests) are exposed to a near-certain capitulation. They are constructive structures for resignation.

From the island’s original name of Massacre, to so many named fatalities: Katrina, Ivan….up to the current oil-spill catastrophe and the over 1.9 million gallons of chemical dispersants poured in to date to dissolve the crude oil that began spreading on 20th April, in what is seen as the worst spill in history, this island has a natural complicity with adversity.
How can this island settle or face this conjunction of disaster and its subordination to the
subsoil with the property policy of its meagre surface? The inhabitants of Dauphin Island have a motto: rise up in the face of adversity, but, doesn’t this proclamation contain a neurotic obstinacy in what is a supra-heroic, but useless existence? Their denial of docility generates a permanent constructive worship, an establishment of the bricoleur as the counter figure to the concept of dedition; of conversion into a deditian territory.

At the moment its inhabitants distance themselves from objective temporary logic, the architectural practice is developed from a permanent chaining of the hours but in a time that is at once measurable. The now old woman who owns a house with dilapidated pillars and a large part of the boarding of the walls detached or raised up proudly stated that the house had been erected by her grandfather, without doubt convinced by the concept of belonging, but now postulated in the budget of non-continuance. Actually, in itself the house was an unruly but ruinous symbol of the confrontation with the forces of nature.

In this form of inhabiting disaster there is a paradox, on the one hand the way the community establishes itself, in a continuous constructive activity, fixes the group in a society of the present and, on the other hand, that fragmentary state permanently reconciles it to a vision of the deconstructed whole around a historical continuity. Which means they live in real time and yet in delayed time. That obstinacy to consecrate existence to an occupation of the terrain exposed to folly, demolition or devastation places them inside the promethean myth of the boldness to do or possess divine things. Living out, therefore, the rigour of random phenomena as opposed to the deterministic phenomena in a reality that is modelled around distributions of probability.
Katrina caused the loss of 250 houses on a surface area of 16 square kilometres, and Ivan 170 only in the more open, western area of the island. Now, since an accident that occurred on 20th April on the Deepwater Horizon oil platform caused the spillage of 800,000 litres of crude oil a day, approximately 172 kilometres of barriers have been deployed along the whole of the Gulf coast. The fact is that these barriers are prominent enough to drive away the American middle class who seek exile and relaxation on the island. The reality is, as the locals assert, that without visitors this town is dying.

I left Dauphin Island in the morning; the day was clear, the waters of the gulf were not threatening as they had been on some days during my stay, but calm and schematic, and on leaving I felt that I was depopulating the depopulation even more. I crossed over the road under a clear, accessible sky, amidst the slight tumult of the white dunes and the inhabited or vacant houses against the light. One week later I heard that just the day after my departure Ida, a tropical storm, had passed through, devastating and shrivelling the island.

Shortly afterwards I received this e-mail
Hello – I want to thank you for coming to our island and I’d like to ask a favor of you. As you may be aware, we had Tropical Storm Ida hit the island just this past week. I’ve attached some pictures of the house that you guys stayed in to let you see the damage. I believe you were here taking pictures of our island, and was wondering if you could share any so that we may show FEMA and others the amount of beach erosion we have suffered again.

Thank you for your consideration!

And subsequently this one

To have an artist’s perspective of our island before a storm can sometimes help when dealing with government bureaucracies.

I appreciate your consideration,

FEMA are the initials of the Federal Emergency Management Agency, the US agency for aid in situations of natural disaster or terrorism.
The photos they sent me, at my request, of the house I had lived in for three weeks, showed it painfully gaping and dismantled, with clear areas and whole sections crumbling.
Even before putting the images I had captured to use, they were already having repercussions, as documentation, on the region for a new restoration exercise. For a recurrently renovated or entirely recovered architecture. Just in case I was not already perplexed, this was redundant perplexity. Not only had I escaped a hurricane by a few hours; the request for my images made the concept of moribundity as an architectural boost even more specific to me.

This project enters a nominal decamping that is not already visible and shows the tension of an outside with the emergency of a destination; a thought of postponement of utopia. Understanding utopia in the terms in which Marc Augé reflects it as a necessity, not to dream of realising it, but to stretch out towards it and thus obtain the means of reinvention of daily life.

Fourteen blocks of small businesses were demolished to construct the twin towers. Now the architect Richard Gage; the founder of A&E9/11Truth, who has been designing steel structures for buildings for over 20 years, tells us there is an irrefutable body of evidence that suggests that the Twin Towers and building number 7 of the World Trade Center were demolished by controlled demolition. The old town of Beijing is disappearing at the giddy rate of one square kilometre a year, captive to real estate speculation and the work related to the 2008 Olympic Games. This has been denounced by Chinese architects. According to experts, at present the old town of the former imperial capital has around 62.5 square kilometres (the equivalent of a tenth of the city of Madrid) and continues to lose ground to new development projects.
By this I do not mean to point out the notorious relationship between architecture and destruction, but show how often subsequent reconstructions of the areas that have undergone intervention due to speculation, catastrophe and terrorism involve no reintegration whatsoever, but rather replacement; which whilst it may return, does not interpret the surroundings with regard to the pre-existing space.

Contrary to this global flow (peremnal) architectural activity on Dauphin Island is not so much purposeful as substitutive. And in turn it does not seek to avoid its collapse using predetermined customs of containment and paralysis. That is to say, it does not use more decisive anchoring methods, or materials that offer more sail-type resistance to the wind. In principle this may seem to be a mistake, a voluntary outlawing, a banishment, in short, to that natural state of resignation. But the fact is that there is an identitary conformation and a constructive reflection anchored in the south of the country with settlements that are not permanent but are simultaneous, that is, as swift as the immediate occurrence of their demolition or collapse.

My goal, in this series of images, is to carry out project work, a sum of interventions, of alterations to space, based on pre-existing “cartography” but paying attention to the want of proportion bequeathed by the territory itself, and almost to a certain suprarealism, a certain exaggeration and based on respectful usage of said territory. Locating, for this purpose, small buildings or buildings on a scale that is symmetrical to the context, and executing them on those voids on the beach where vestiges indicate a prior presence.
The idea is also to restore and accentuate the phantasmagoria inherent in the area, but using energy-efficient buildings, with recycled materials or materials with low energy expenditure, buildings which are in turn a nature observatory. 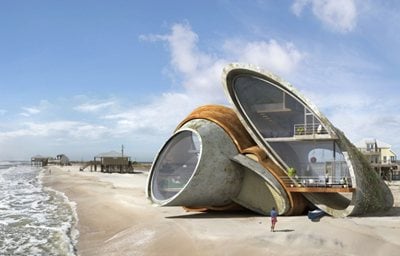 Dauphin Island is located on a sand bar. The Gulf of Mexico lies to the south of the island, and the Mississippi Sound and the bay of Mobile lie to the north. The island currently has a fixed population of 1200 inhabitants and is connected to Mobile by the hyperboloid Gordon Persons bridge – in an almost dreamed-of suspension. Even though it has several bird reserves, the main one is the Audubon Bird Sanctuary; it is the primary meeting place for the birds that emigrate to the north from...