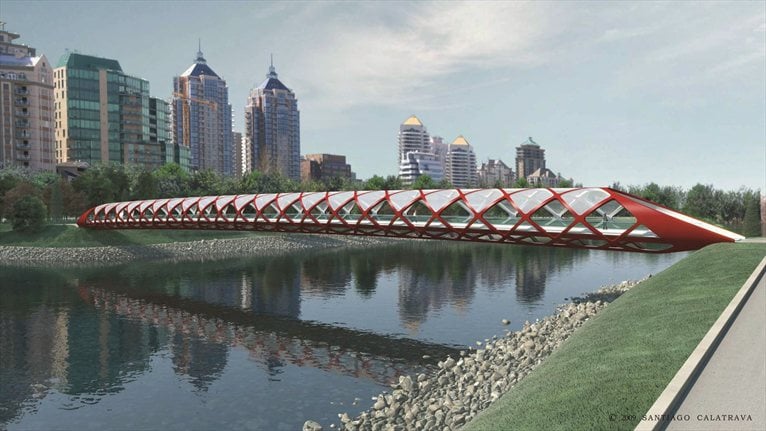 The Peace Bridge, designed by Santiago Calatrava for the city of Calgary, Canada is characterised by red spirals on the outside with a single 130 metre long pathway inside.

The famous architect got his inspiration from the environmental conditions of the urban and landscape context. Calatrava, who is famous for his vertical projections like the High-speed road link Reggio Emilia - Bagnolo or the Sundial Bridge in the United States, has been forced to keep its height under 7 metres due to its vicinity to the heliport and to respecting the no flyover zone, as well as to the levels reached by the water and ice of the river Bow below.

The bridge has, therefore, been designed with a structure of tubular steel beams with supporting jetty anchored to the riverbed in order to keep down environmental impact.

The architect's main objective has been that of creating a permeable pedestrian bridge for the inhabitants of the Canadian city operating both in the summer and in the winter, in response to the needs of the people who also use the walkways along the river in the colder times of the year.

There are only two days to go before the official opening. A celebratory event has been organised which is specially geared towards families and will be held on Saturday afternoon near the southern side of the bridge in Peace Park.