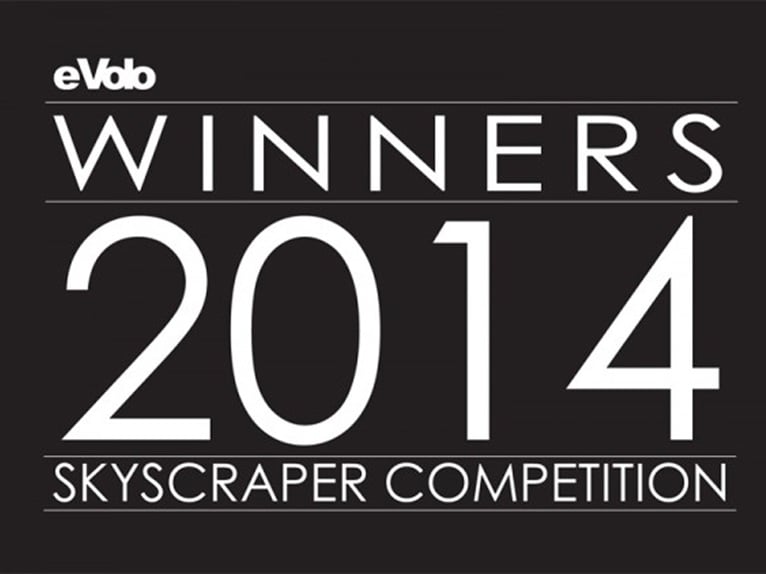 The annual Skyscraper Competition is one of the world’s most prestigious awards for high-rise architecture. It recognizes outstanding ideas that redefine skyscraper design through the implementation of novel technologies, materials, programs, aesthetics, and spatial organizations along with studies on globalization, flexibility, adaptability, and the digital revolution. 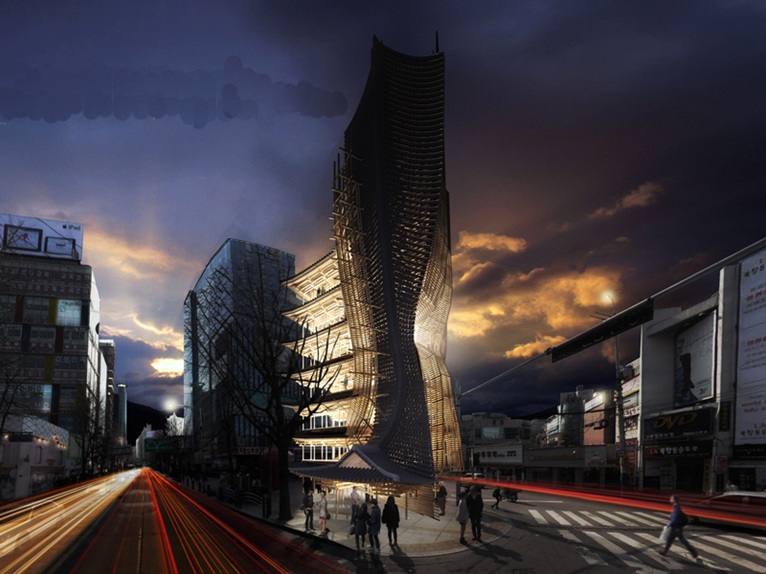 The jury awarded first prize to Vernacular Versatility. By Yong Ju Lee for his project based on a Hanok, a traditional Korean house. A Hanok is characterised by its exposed wooden structural system and tiled roof. The curved edge of the roof can be adjusted to control the amount of sunlight entering the house while the core structural element is a wooden connection named Gagu. The Gagu is located below the main roof system where the column meets the beam and girder and it is fastened without the need of any additional parts such as nails – this connection is one of the main aesthetic characteristics of traditional Korean architecture.

Historically this structural system has been developed exclusively in plan, applied only to one-story residences. However, as various modeling software have been recently developed, there are more opportunities to apply this traditional system into complex high-rise structures that meet contemporary purposes and programs. Vernacular Versatility can open a new chapter of possibilities to bring this old construction and design tradition to the present day with efficiency and beauty. 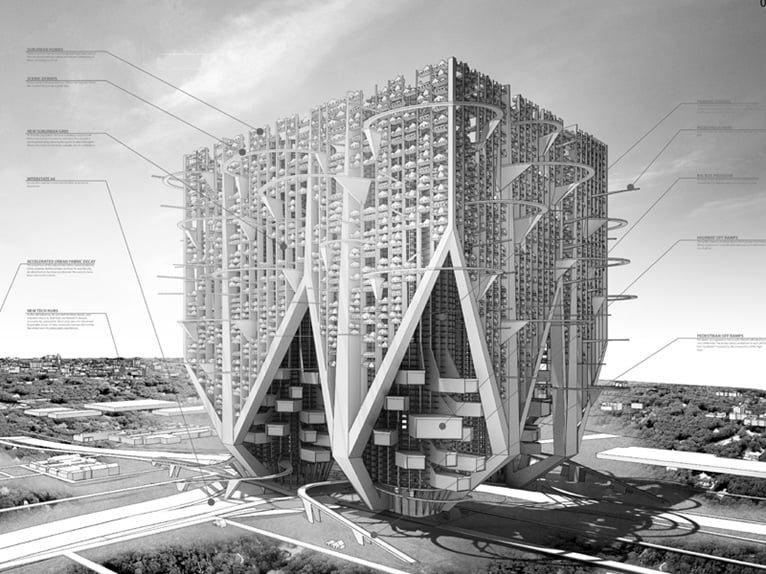 The runner up was Mark Talbot and Daniel Markiewicz's Car And Shell Skyscraper: Or Marinetti’s Monster. Their project proposes a city in the sky for Detroit, MI. The new city is conceived as a vertical suburban neighborhood equipped with recreational and commercial areas where three main grids (streets, pedestrian pathways, and structure) are intertwined to create a box-shaped wireframe. Traditional and contemporary houses and other diverse programs plug in the structure to create a rich vertical urban fabric. This is something like the vertical city of the Shanghai Tower we talked about a couple of weeks ago designed by Gensler architects and to a lesser extent Office for Metropolitan Architecture (O.M.A.)'s recently completed largest building in Holland, De Rotterdam. 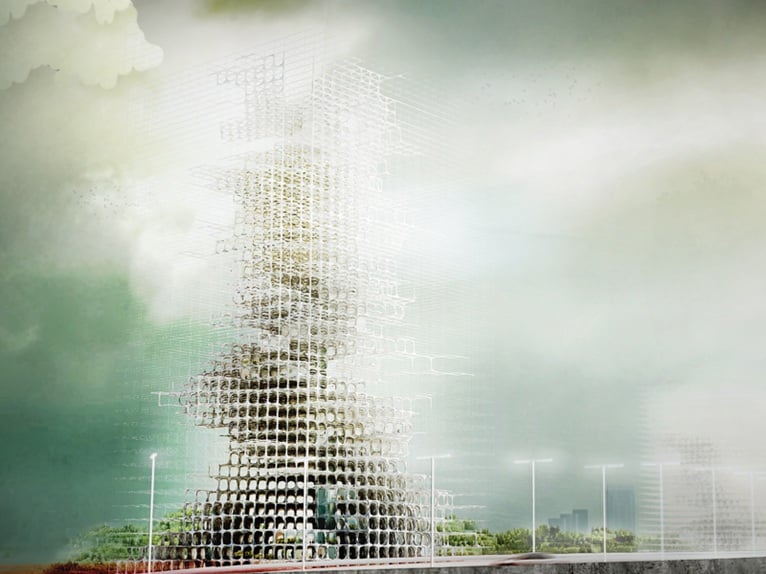 Existing carbon capture practices use the method of point capture, catching carbon gases at the source, requiring a significant initial investment in additional facilities, infrastructure, and maintenance of underground storage. Hence, the implementation of point capture method may directly and indirectly contribute to a significant sum of greenhouse gases through construction, material production and processing, in addition to the contingencies associated with underground storage.

By constructing a simple vertical grid scaffold as a framework, we are given control to the extent and underlying structure of the skyscraper. Required ingredients for material propagation are supplied through the scaffold, while its actual pattern of growth is defined by environmental factors such as wind, weather, and the saturation of carbon dioxide within the immediate atmosphere. Thus each resulting structure is sui generis in its formal expression, while maintaining a regular spatial organization for ease of occupation and adaptation. 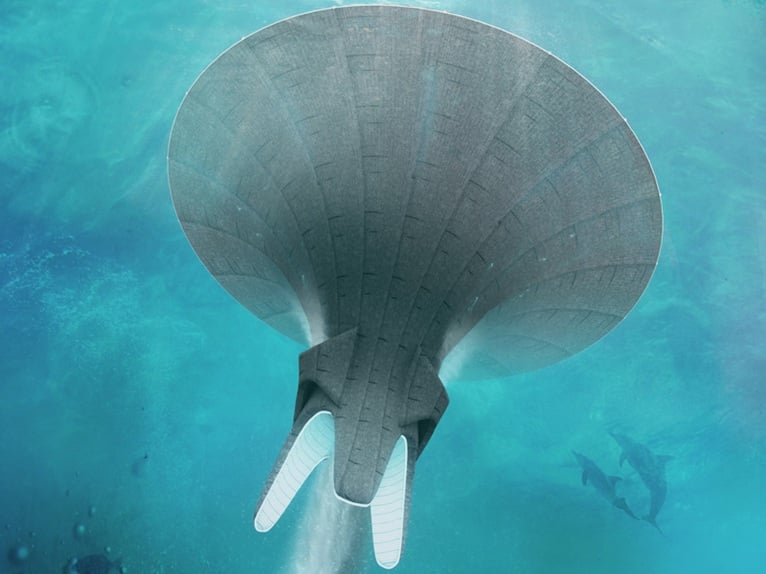 Honourable mentions include Sung Jin Cho's kind of inverted skyscraper, called Seawer: the garbage seascraper, a drainage hole 300 metres deep and 550 metres in diameter in the Great Pacific Garbage patch which filters the non biodegradable plastic and returns it to the surface to a recycling plant, while the seawater is further cleaned and released into the ocean.

The Great Pacific Garbage Patch is a convergence zone of various currents in which all the waste spilled or thrown into the ocean collects. Its size is predicted to range from 700,000 to 15,000,000 square kilometres. Its existance was predicted in the late 1980's but it wasn't discovered until the later 1990's. Considering its size, it is no surprise that the seeking the debris from the missing Malaysian airliner has been so difficult when you consider that the Indian ocean contains another of these garbage patches.

Archilovers are media partners of the awards.