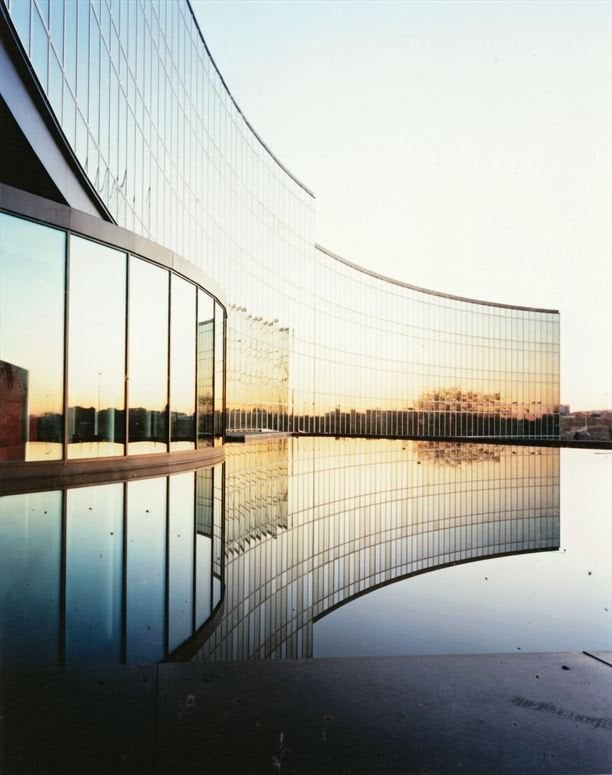 The New headquarters of the Italian Space Agency was completed in January 2012. It appears as an enormous isolated object "touching down" in the countryside of Tor Vergata.

5+1AA Alfonso Femia Gianluca Peluffo, the architects who designed it, have created a dark structure with regular volumes suspended in a formal equilibrium.

Buildings with pure geometries, despite performing different functions, shape the circulation system in a blend of empty and filled spaces. The new 64 million Euro headquarters includes state of the art energy systems using renewable resources, all technological conveniences, a restaurant and a crèche.

The objective of Alfonso Femia and Gianluca Peluffo's project has been to reach a balance and a synthesis, based on contradictions, dissociation, paradox.

The dark volumes have different degrees of surface opacity due to the choice of different materials combined to form a black monolith with a magnetic character.

In opposition, the sequence of conical skylights with a coloured interior contrasts with the dark shades along with the succession of white pillars and the play on light of the reflections of water.

An evocative building playing on the absence of gravitational force and the suspended balance of the bodies. Indeed it will the protagonist of several initiatives, like the public meetings of Roma Metropoli at the MAXXI, beginning tomorrow (3 March 2012) until 26 May. This cycle of meetings will be discussing the changing face of contemporary Rome.