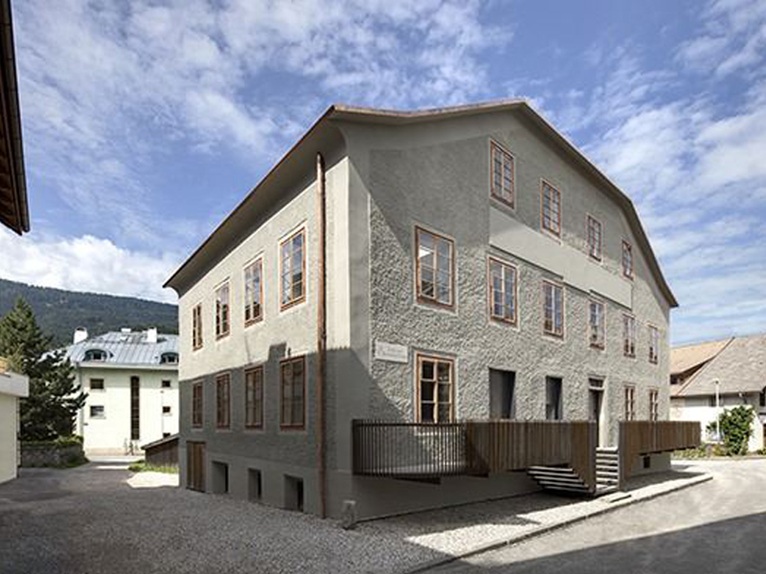 The house Wohnhaus Burger Oberschmied at Monguelfo (BZ) by architect Stefan Hitthaler recently won the Alto Adige 2013 Architecture Award in the category “Interiors”. It concerns the restoration of a century-old house that over time has become “a safe presence, a marked piece of the everyday landscape, a peaceful certainty. [...] It is an entity in the town, a common point of reference in the thoughts of the people, a piece of urban fabric characterized by its normality.” 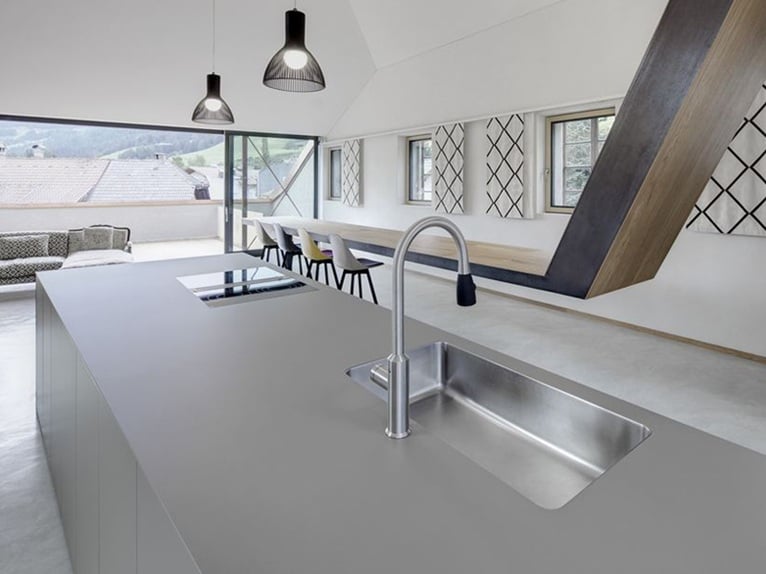 The restoration starts from the respectful preservation of the image of the house: the perimeter walls of plastered stones with that typical untreated and rough mortar have been cleaned and stitched up in period style at the points where time has been less generous. This has not been carried out to seek its former glory, but with the consciousness of giving further years of life to an artefact whose dignity remains with the urban continuity. 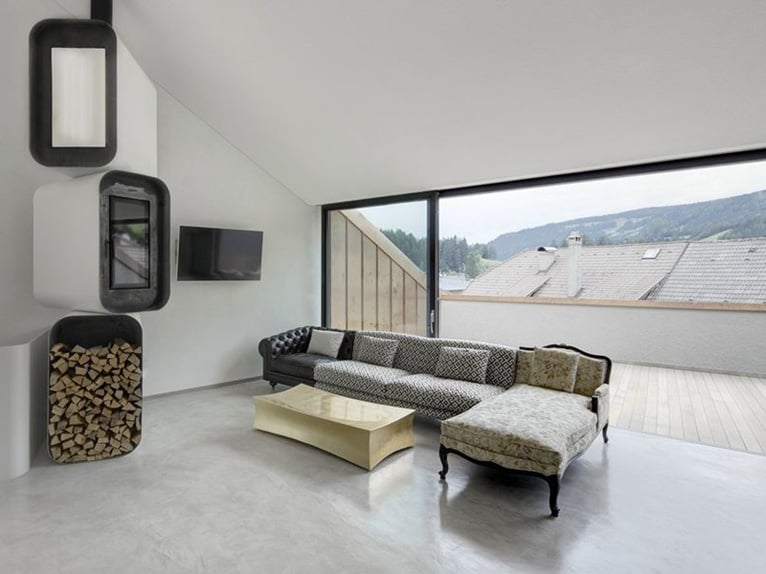 The main design concepts are developed here, on the outside. The house becomes a single volume, cleaned of its incoherent superfluous elements and of the dust deposited by past seasons: the unexpected result is the image of a contemporary architecture, almost abstract in its clear and clean lines. 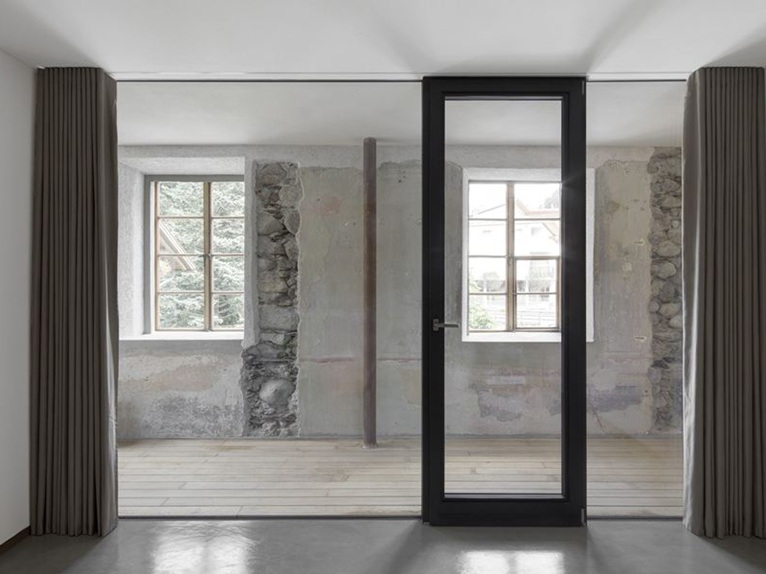 The two existing entrances become symmetrical with the addition of a new entrance, coming from opening up an existing window to the floor. They are simple and pure elements, drawn and left in their primitive state of raw metal juxtaposed to the façade: they will age together, they will change colour again, they will mix. The windows remain as they were: divided into six panels, classic images of a verified tradition, dusted down and cleaned of spent paint to reveal their primary red-orange colour. 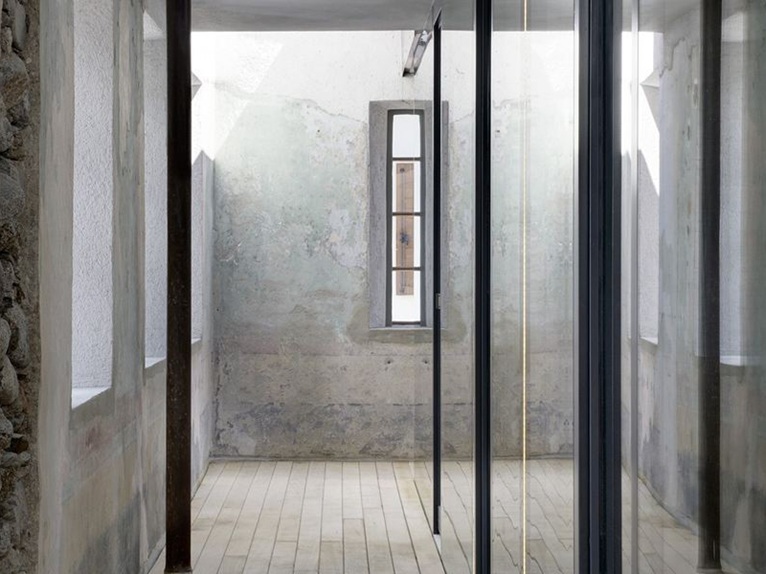 Even the pre-existence has adapted itself to the new lifestyle that inhabits it: to meet the energy needs and satisfy domestic needs, the interior spaces are designed inside a new wooden casing, a volume within a volume. The dialogue between two bodies thus materialises, which find their synthesis in the unity of the house: on three sides, the two courtyards to the south, the wooden walls huddled against those in stone to form a single powerful septum. 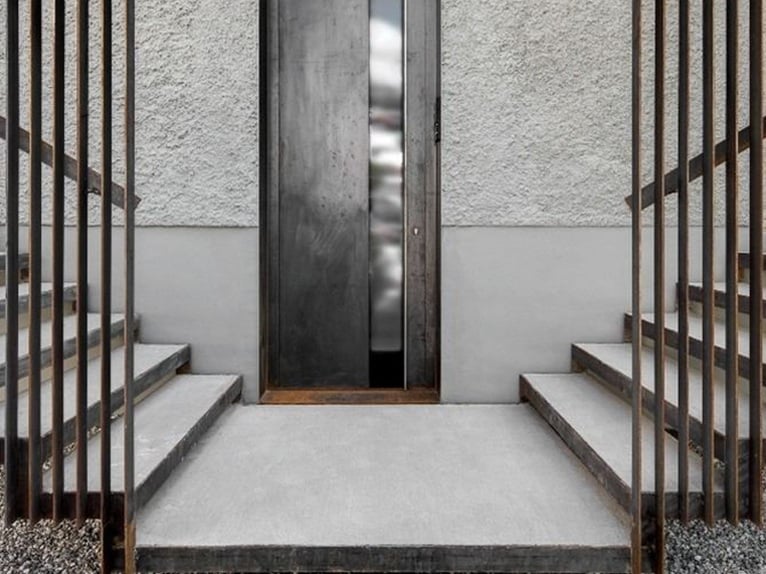 To the north, the richer wall as it is projected toward the centre of the village, the wooden septum is dematerialized in a continuous window that takes a slight distance from the existing stones. This metaphysical space is a place of thought, a gallery open to the sky and marked by an ethereal transparent façade interrupted only by doors-frames on the rooms and by the ancient stone wall, whitewashed in various shades reminiscent of the different colours given to the rooms in their previous lives and maintained according to their resistance to degradation and cleaning. Like a long box framed by the slate doors of the glass walls, the inner side of the old wall releases past stories into the gallery and into the rooms to mix with the current stories. 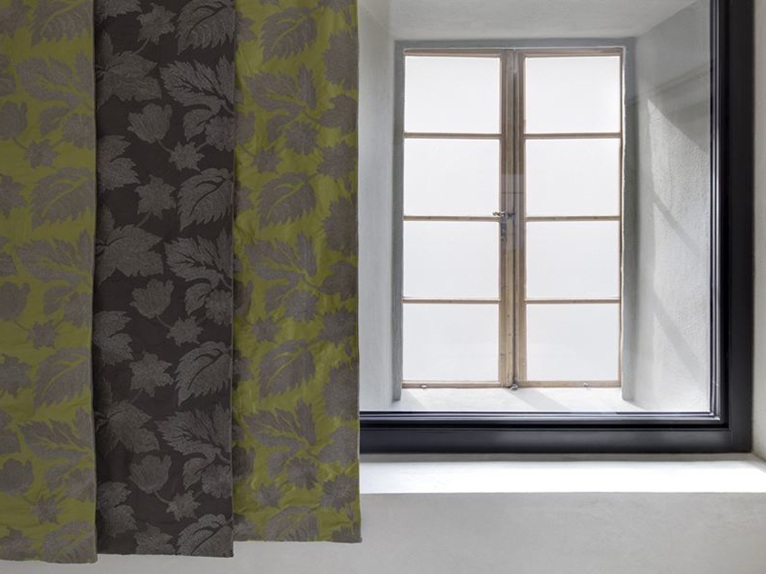 The rediscovered colour of the original plaster is the base that features all the elements of the house. Starting with a shade which is very similar to that of the outside for the basement, the attic becomes an “almost white”, along with a growth of light that penetrates the old house, from the dark spaces of the basement to the explosion of light of the double height living room, which becomes a unique object, projected outside through the terraces that surround it on the short sides. These are obtained by subtraction from the volume of the house: deep holes that penetrate to the gallery on the first floor, bringing with them pieces of sky. The landscape invades the house: clouds form the ceiling of the gallery, the profiles of the dolomites form the wall of the living room.