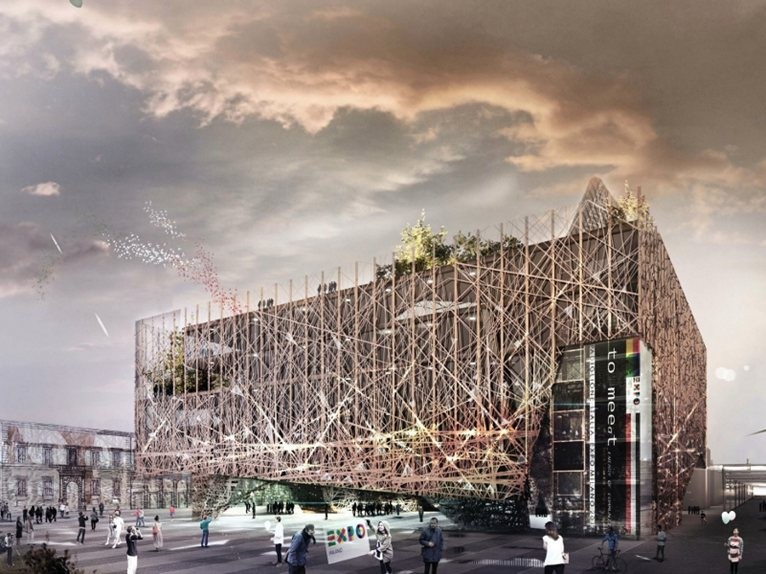 The winning project of the International Design Competition of the Italy Pavilion at Expo Milano 2015 was announced last Friday, April 19th. The winner of the international competition was Nemesi & Partners of Rome with Proger of Pescara and BMS Progetti from Milan.

The group wanted the Italy Pavilion to be built as a community gathered together around its square: the void housing the symbolic linchpin of the exhibition space and that gives shape to the volumes of the architecture. The volumetric articulation of the project of Palazzo Italia is based on four main blocks, arranged around a central void-square (connected by bridging-elements) that host the main macro functions: Exhibition Area, Auditorium, Offices and Meeting Rooms. The project develops the idea of an architectural body as energy independent as possible, in which the maximum balance between production and consumption of energy is guaranteed. 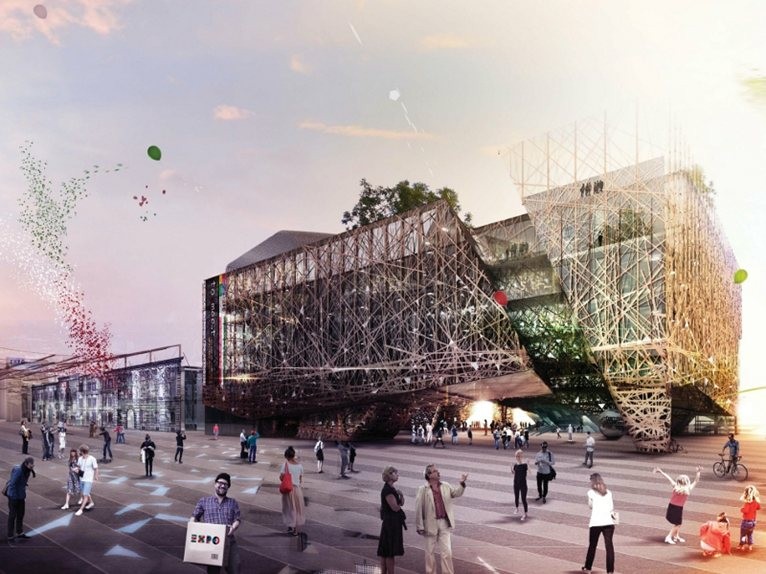 For the jury: “The winning project interprets the competition brief with particular expressive care and independent formal interpretation, designing and sharing the theme of 'feeding the planet, Energy for Life' with a clear and comprehensive architectural character with the prefigurations introduced by the concept. It became clear how the architectural core in all its complexity is capable of restoring the sense of nature which transforms 'from ancient rite to rite of contemporaneity' with immediate effect. A 'nest' architecture, an obvious transposition of the nursery, of the civic sense of belonging to a community in a nutshell. The development of the project, both for the temporary works aligned along the Cardo and for Palazzo Italia, allows a gradual and safe and exhibition and functional route, describing a floor plan full of charm and never repetitive. This condition feeds a greater sense of surprise and curiosity, which is essential to describe the sense of living, our daily lives and the spaces of the community. The technological choices proposed with a view of environmental sustainability of the building appear to be convincing, both in terms of the passive design of Palazzo Italia and for the temporary and flexible nature of the buildings facing onto the Cardo.” 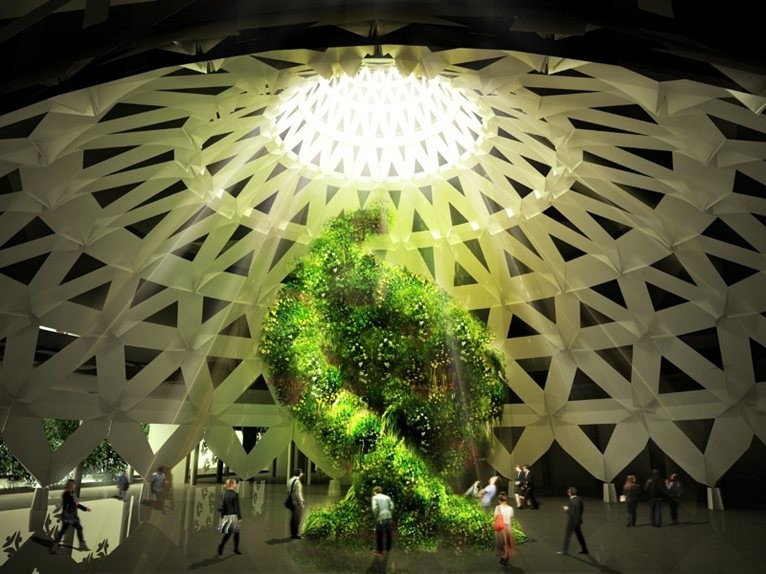 The runner up, by Benedetta Tagliabue (EMBT Miralles Tagliabue), “presents an original image of strong emotional impact, both for Palazzo Italia and for the buildings of the Cardo. The central dome, the true heart of the project and interpretation of the Tree of Life, gives rise to a space of strong appeal and great quality. The solution proposed for the buildings of the Cardo is to be innovative from an architectural and volumetric organization viewpoint, also in terms of reuse. The formal innovation is not always accompanied by the attention to detail of the technological solutions and by a careful control of constructive feasibility.” 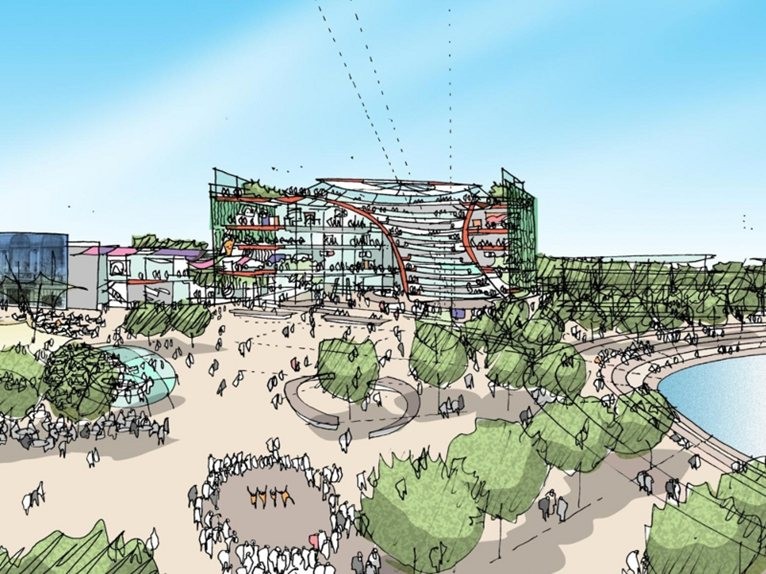 The project ranked third, by Matteo Fantoni Studio, “has an element of strong interest in the central core that brings light into the building, facilitates access to the visitors and determines the quality of the spaces. These elements are, however, of complex feasibility considering the lack of available time. The transparency of the enclosure creates a building which is open and accessible during the day, and visible and representative at night, providing natural light to the functions housed within. The care of the issues related to environmental sustainability of the buildings gives the project an additional element of quality and relates with the concept and the theme of Expo Milan 2015.” 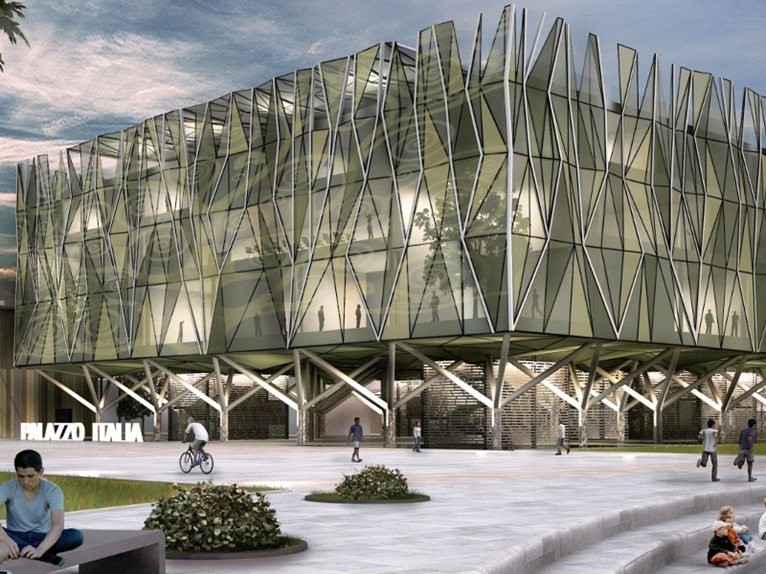 The fourth-ranked project, designed by Giugiaro Architettura, “responds correctly to all the competition requests, presenting a coherent solution from the architectural and functional point of view, accurate in the technological choices and in the feasibility study. The reference to the image of the Tree of Life is clearly represented by the façades and by the structural scheme proposed; in the same way the study of the environmental sustainability of the buildings is a strong element of adherence to the concept and to the theme.” 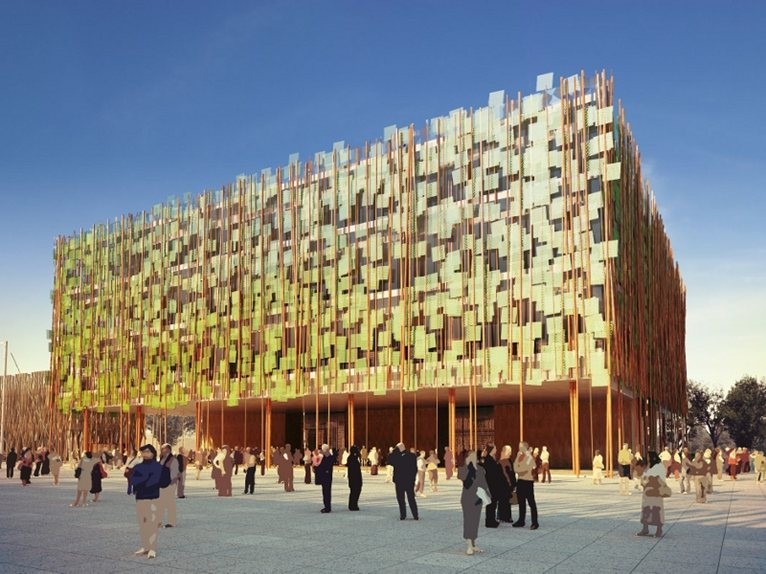 Last but not least, the equal fourth ranked project, designed by Mario Bellini Architect(s) “has a an original layout, with a system organised on two blocks, crossed by a large central space. This solution is consistent from a functional point of view while limiting the flexibility of use and the management of flows. The study of the floor plan and functions of the buildings of the Cardo is particularly thorough, with proposals that guarantee high quality of the exhibition spaces and for events. The technological solution of façades clearly recalls the image of the Tree of Life, giving a unified and homogeneous definition to all the buildings that make up the Italy Pavilion system.”