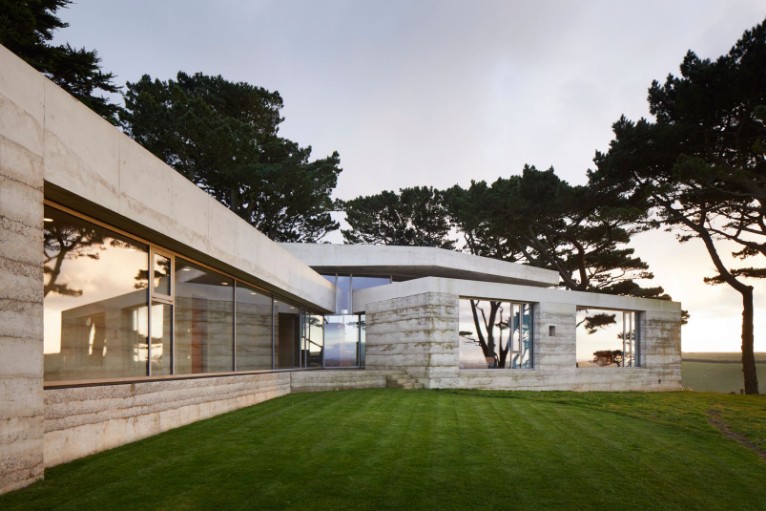 Alain de Botton – a philosophy author based in London – set up holiday rentals company Living Architecture in 2006, with the wish to enhance the appreciation of modern architecture, whilst providing the opportunity for an exceptional holiday experience in a space designed by an outstanding architectural practice.

Twelve years later, the company has built eight homes dotted all over the UK and designed by some of the most respected names in architecture such as MVRDV and Nord Architecture.

With a new house opening in 2018, The Secular Retreat designed by Peter Zumthor, Living Architecture continues in its mission to bring the latest in contemporary domestic architecture to a future new audience.

Here's a look back at all eight houses, from the first designed by MVRDV to the last by Zumthor:

From the road, the house appears to be a traditional domestic dwelling with a chimney and a pitched roof. However, in an effort to overturn the cliché of a holiday home, the whole building is in fact 30 metres long and dramatically cantilevers over a dip in the ground to the rear, thrusting the barn into the surrounding landscape and providing wide views from its huge panoramic windows.

By concealing the long sides of the barn with trees and covering the exterior in reflective steel tiles, the house changes throughout the year, taking on the different hues of the seasons. 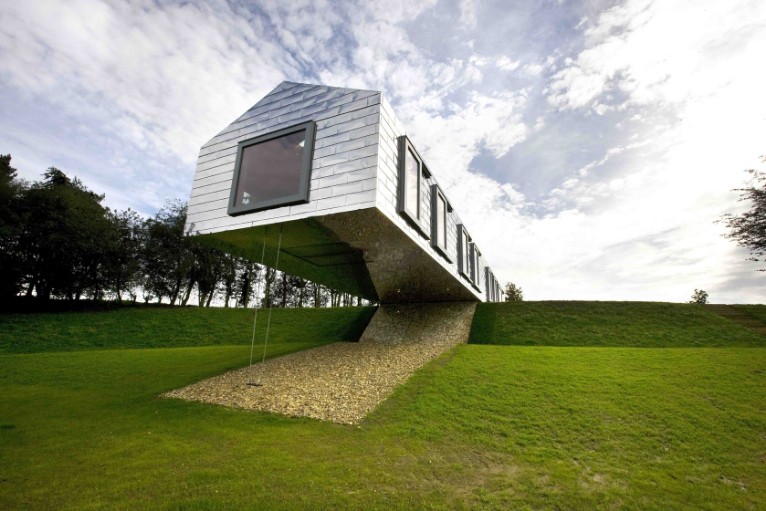 The Dune House is rooted in a Scandinavian tradition of strongly referring and relating to the surrounding landscape, while at the same time inhabiting clear relations to the English building traditions in the area.

The roof of the house is clad in golden sheets of steel that mirrors the changing sky. The ground floor is contrasting this by its lack of relationship to the architecture of the top floor. 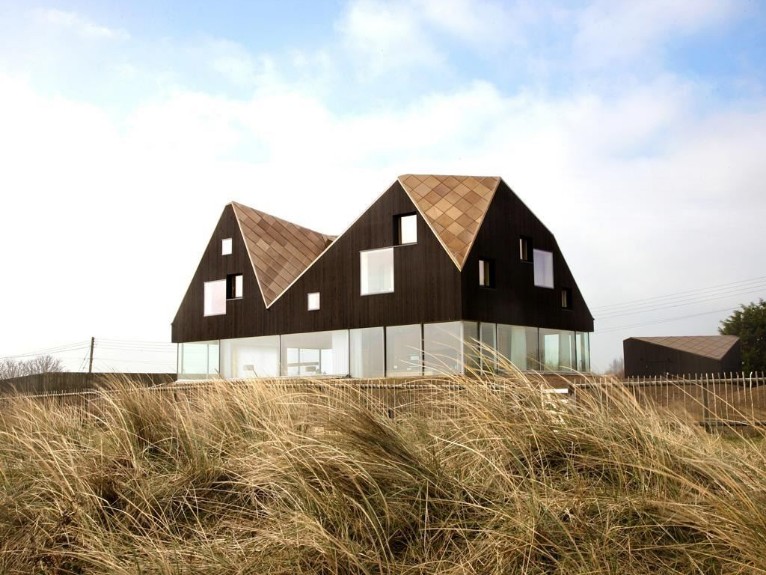 - The Shingle House (2010) by Nord Architecture

The Shingle House is a simple, monumental, black house, finished on the exterior in the traditional tarred shingles and boards of the local vernacular, and in a beautiful palette of concrete and timber within.

It is adjacent to the late artist Derek Jarman’s house on what is otherwise a vast beach, empty save for a random collection of fisherman’s, two lighthouses, the terminus of a miniature coastal steam train and in the far distance, the dramatic form of a nuclear power station. 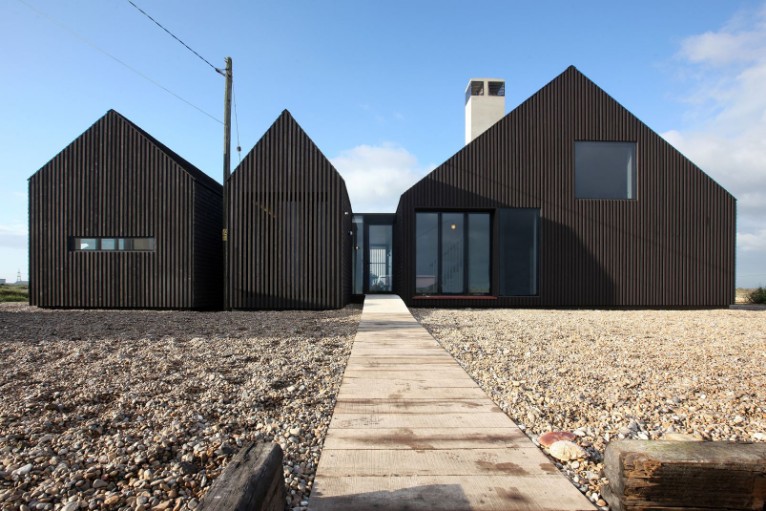 This boat-like structure laid anchor atop London's Southbank Centre, offering occupants impressive views over the city skyline. It was designed by architect David Kohn in collaboration with artist Fiona Banner. However its stay was only temporary, it is currently in storage, waiting to travel to a new destination. 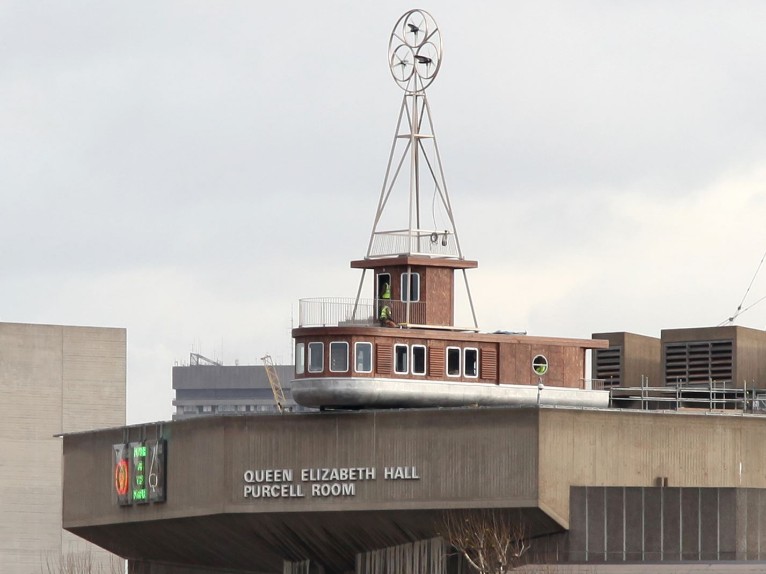 For Living Architecture, Hopkins Architects have created a house that in many ways sums up the highlights of their career. One catches echoes of the great roof at Portcullis house in Westminster, the historical awareness of their Norwich Cathedral hostry and the classical formalism of the Queen’s Building at Emmanuel College, Cambridge. 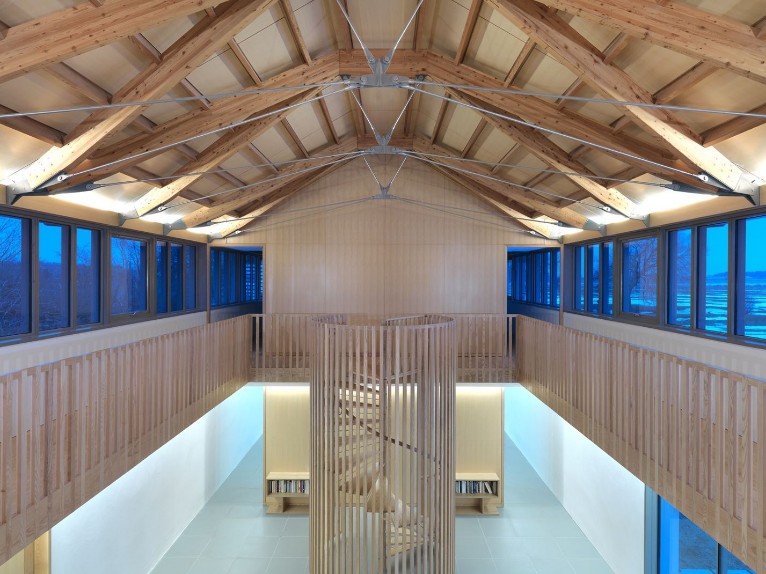 The building has been designed to evoke a tradition of wayside and pilgrimage chapels in the landscape. It is a singular building, appearing as a small, beautifully crafted object amongst the trees and fields.

The house does not attempt to mimic the appearance or materials of existing buildings in the local village of Wrabness. Instead, it offers a unique addition. Its materials and forms are sympathetic to the site and the area’s sense of remoteness. For example, hand-made tiles relate tonally to the landscape while the building’s simple pitched roof forms echo simple agricultural buildings and farmhouses. 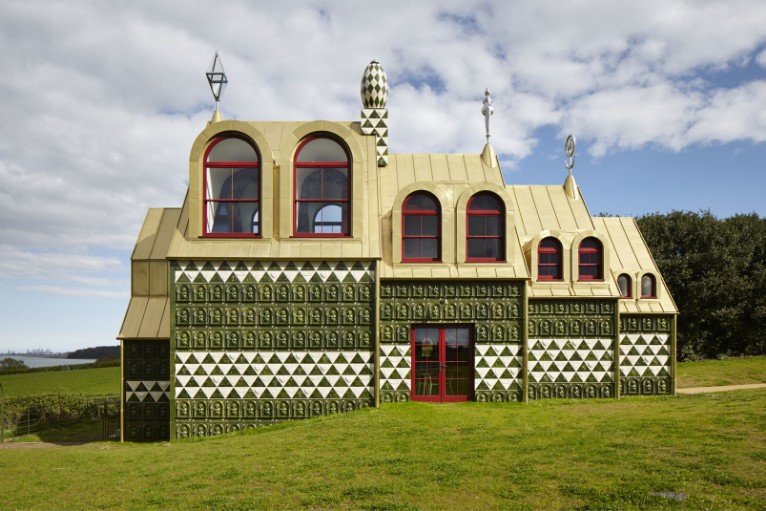 The Life House is the seventh property, and the first in Wales. The design of the house, which sleeps six people, is based upon the concept of a retreat where serenity, contemplation and restoration are foremost; a place where a week-long stay will immerse the visitor in a zone of extreme calm and leave them revived and re-invigorated to resume their responsibilities in the world. 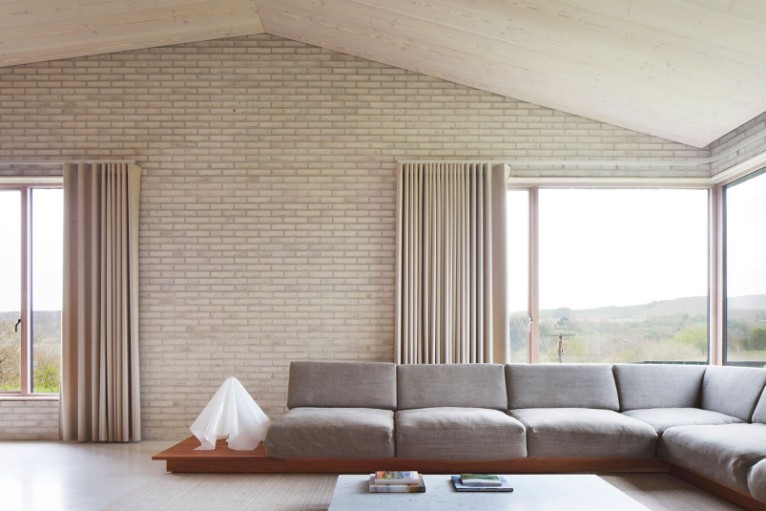 The dramatic layered-concrete and glass design sits horizontally on the site, framing stunning views across the landscape in all directions. Handrammed concrete forms both the interior and exterior spaces, to give the building a mass and scale characteristic of Zumthor’s work. 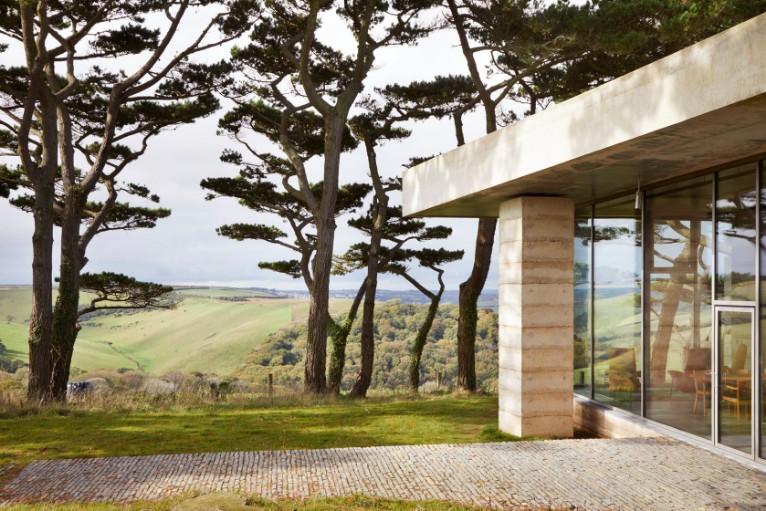