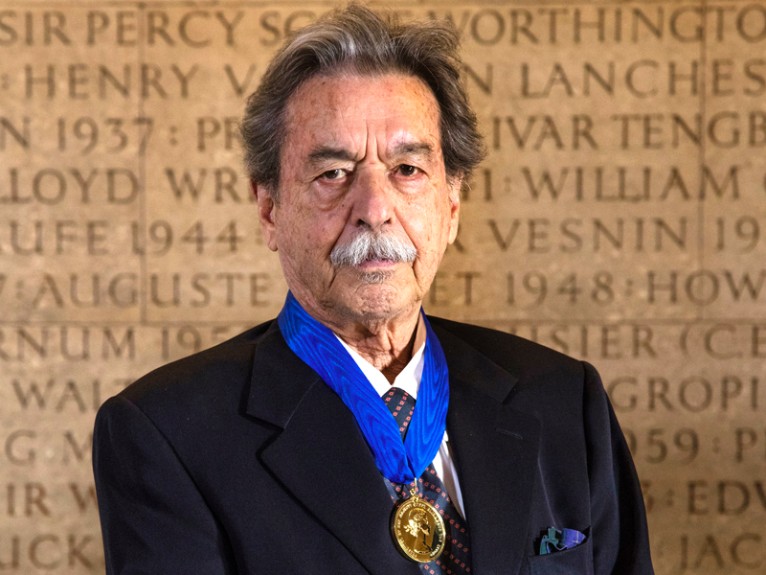 The Royal Institute of British Architects (RIBA) has yesterday (Wednesday 1 February), on behalf of Her Majesty The Queen, presented Paulo Mendes da Rocha with the 2017 Royal Gold Medal for architecture.

Given in recognition of a lifetime’s work, the Royal Gold Medal is given to a person or group of people who have had a significant influence “either directly or indirectly on the advancement of architecture”.

In 1957 he completed his first celebrated building, the Athletic Club of São Paulo, followed by a large number of further public buildings in the city including Saint Peter Chapel (1987), the MuBE | Museu Brasileiro de Escultura (1988), Patriach Plaza (1992-2002), the Pinacoteca do Estado de São Paulo (1993) and the FIESP Centro Cultural (1997).

Outside São Paulo, notable buildings include the Serra Dourada football stadium in Goiás (1973), Lady of the Conception Chapel in Recife (2006) and Cais das Artes arts centre in Vitória (2008).

Despite Mendes da Rocha’s international reputation, there have been just a few chances to experience his work outside his home country, with the significant exception of Brazil’s pavilion at Expo ’70 (Osaka, Japan) and Portugal’s National Coach Museum (Lisbon, 2015).

RIBA President and chair of the selection committee Jane Duncan said: “Paulo Mendes da Rocha’s work is highly unusual in comparison to the majority of the world’s most celebrated architects. He is an architect with an incredible international reputation, yet almost all his masterpieces are built exclusively in his home country. Revolutionary and transformative, Mendes da Rocha’s work typifies the architecture of 1950s Brazil – raw, and beautifully crafted concrete.
Paulo Mendes da Rocha is a world-class architect and a true living legend; I am very pleased to present him with the Royal Gold Medal, the world’s highest honour for architecture.”

Paulo Mendes da Rocha said:
“After so many years of work, it is a great joy to receive this recognition from the Royal Institute of British Architects for the contribution my lifetime of work and experiments have given to the progress of architecture and society. I would like to send my warmest wishes to all those who share my passion, in particular British architects, and share this moment with all the architects and engineers that have collaborated on my projects.”