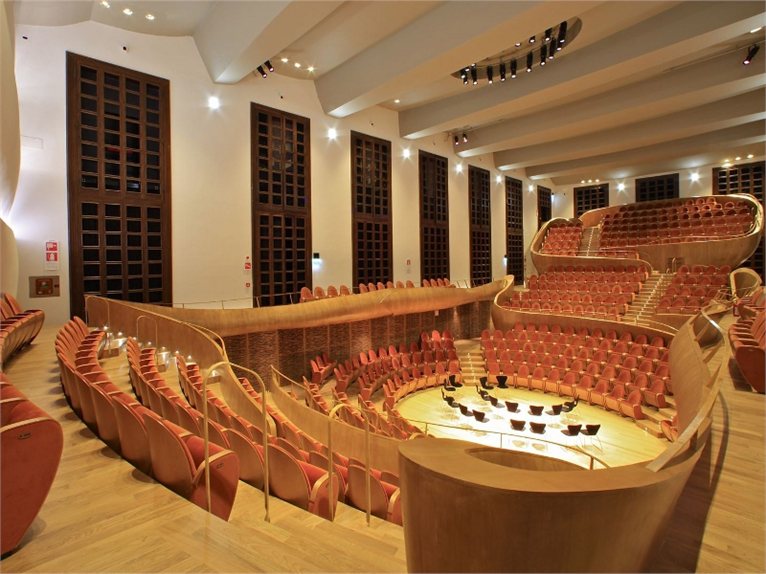 Cremona, the world capital of violin making historically and in terms of its tradition, recently hosted a special preview: the presentation of the 'Giovanni Arvedi' Auditorium of the Violin Museum. Constructed by the Arvedi Buschini Foundation and by the City council with the restoration of the historic Palazzo dell'Arte and the setting up of the new museum, it will be officially opened in the spring of 2013.

The event also provided an opportunity to celebrate the international recognition recently received by the city of Cremona, inscribed for “traditional violin craftsmanship” in the UNESCO list of intangible cultural heritage.

The Auditorium, a 475 seater gem, created from the synergy between Nagata Acoustics company of acoustic engineer Yasuhisa Toyota and the architectural office Arkpabi | Palù & Bianchi architetti, combines the latest technology with the ancient violin making knowledge and the Cremona cultural tradition.

“Right from the planning stage it was clear that this would be a challenge: to embed a sinuous tulip shape in the rigid pre-existing rationalist structure of a small parallelepipedon. To achieve this vision, large-scale interventions were required, like excavating a few meters below stage level to reach the distance of 14 meters between the floor and the ceiling necessary to ensure a limpid and clear sound evenly distributed throughout the Auditorium”.

The project has two sides: acoustics and architecture communicate through the image of the sound wave that propagates in space.

The harmonious structure, made of soft volumes and sinuous lines, captures the sound to translate it into an image: music becomes shape thanks to fluidity and to the organic architectural volumes. The luminosity of the shades of colour of the wooden cladding and the soft colour of the seats, which make it a warm and cosy environment, is combined with the concrete waves, materialized along the ceiling of the room in shades of grey. The stage, the focal point of the Auditorium, also continues these references: the space in which the sound is formed is, in fact, circular, perceived by viewers as a magnetic core which focusses the attention on the musical event. The rows of seats in the tiers of seating surrounding the stage mean that the seated audience envelops the musicians and a dialogue is created between audience and performers.