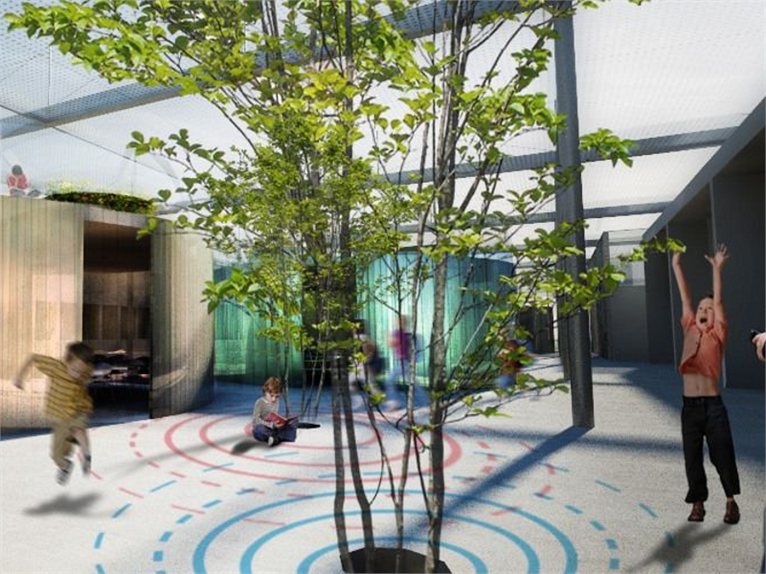 Cavezzo, the town in Emilia Romagna hardest hit by the earthquake last May, will have a new school campus, created by the Turin Architects carlorattiassociati. The firm, which was selected by Renzo Piano from the three groups invited by the Genoese master to present new proposals, has devised a covered plaza for playing and leisure for children and young people.

The same architect Renzo Piano motivated the choice of the project by Carlo Ratti's office, over those by Iotti + Pavarani Architetti of Parma and ARCò - Architettura e Cooperazione of Milan, participants in the contest, in the following way: “Because it gave a bigger sign of hope and because it had a more poetic dimension”.

The future plaza was conceived as a sort of large inhabited greenhouse, covered by a thin and lightweight transparent membrane, capable of keeping down risks to a minimum in the event of new earthquakes. Gym, educational gardens, laboratories, trees will be accommodated in the greenhouse, in continuity with the existing green areas.

The name given to the project is the Learning Garden, because it refers to the desire to connect spaces and activities in a flexible, as well as functional manner.

Carlo Ratti was born in Turin in 1971. He graduated in Engineering at both the Politecnico of Turin and at the Ecole Nationale des Ponts et Chaussées in Paris and teaches at the Massachusetts Institute of Technology, directing the MIT Senseable City Lab, which he founded in 2004. In 2002, he established the office carlo ratti associati - walter nicolino & carlo ratti.

He has carried out several civic projects in Italy like the Collegium project for the reform of the European universities and the Valdo Fusi Committee for the renewal of a square in the centre of Turin. In 2007 he was selected by the Italian Minister of Culture Francesco Rutelli as a member of the Italian Design Council. In 2012 he was also Director of the Strelka Institute for Media, Architecture and Design in Moscow and curated the BMW Guggenheim Pavilion in Berlin.