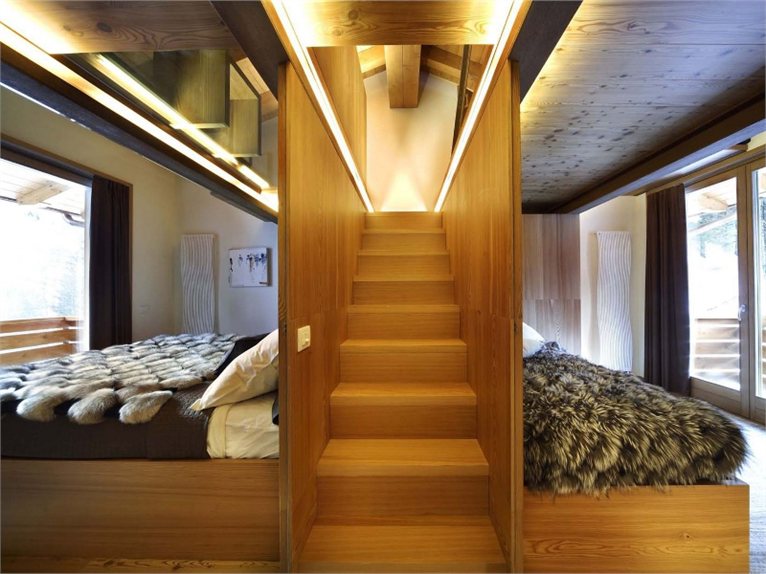 In Campodolcino, in the province of Sondrio, architect Gianluca Fanetti has restructured the interior of an apartment used as a holiday home called Interno Fraciscio.

The house was considerably high and Studio Fanetti decided to exploit it and “split” the space. A second skin made of larch wood was created to give the interior a unique atmosphere of uniformity making it look like a block of wood out of which “the house was carved.” The rooms and furniture emerge from the block by subtraction of material.

In studying and creating this apartment, particular attention was paid to the blend and treatment of materials: waxed larch wood, as well as large tailored stone slabs for the floors, antiquated iron beams treated with acid for the bearing structure of the loft and encaustic filler, also with a wax finish, for the bathroom and kitchen walls. Coatings and fillings alternate with plaster finish walls deliberately left white in order to lighten the 'panelling' effect and significantly increase the perception of the interior space.

The internal design has been translated in the organization of the spaces designed in such a way as to make its as articulated and functional as possible. The entrance opens onto the living area, entirely in larch, which also continues in the kitchenette. The living room, intentionally without continuity to the other rooms, then opens into a second space whose articulation of both visual and walkway flows is stunning. By opening the door of the large wooden cube a staircase is revealed which leads to the sleeping area divided by the staircase itself into two bedrooms and leads to the upper floor where the study is located, suspended above the double bedroom, where the floor is made of crystal to expand the space. The pathway continues into the area where the ceiling is closed with a roof support where there are two large mattresses-sofas intended for guests.