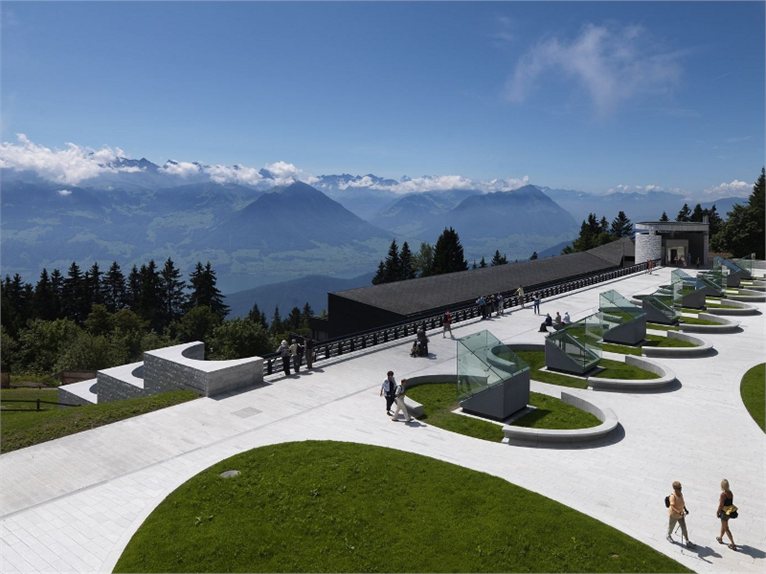 Rigi Kaltbad, a Swiss resort near Lake Lucerne, offers an unspoilt natural landscape of extraordinary beauty which, from the mountain, dominates Lake Lucerne and affords views of the peaks of the central Alps. The Mineral garden and Spa Rigi-Kaltbad, designed by leading architect Mario Botta, was inaugurated on June 29th this year.

It is a unique environment in which he adapted the idea of a new project. A project that is closely related to both the natural environment and to the village of Rigi Kaltbad.

The space is divided into two parts that are closely linked to one another: the village square and the new thermal baths and spa located below it. The new village square resembles a “mineral garden” from which eight skylights 'emerge'. Their shape resembles rock crystals that bring the natural light into the spa below during the day.

The square is bordered to the east by the Vitznau-Rigi cable car station and to the west by a small circular tower that acts an entrance to the structure and as a connection with the cable car to Weggis.

The most charming sightis, however, awaits the users of the interior spaces, which bear the clear and unmistakable mark of Botta, who created a sequence of smooth walls and curved lines “that softly embrace the swimming pool waters. The main inspiration is that of stone, suggesting a timeless mineral, which enriches the water with healing properties and brings back to life the essential aspects of men.”

The same chain, Aqua-Spa-Resorts, this year opened B2 Boutique Hotel + Spa in Zurich, which is designed by Althammer Hochuli Architekten AG. This hotel is located in an industrial building which had been a brewery for 130 years and was then renovated and converted to this new function. A fascinating mix of history and innovation drive the new boutique hotel, also characterized by a thermal pool on the roof.