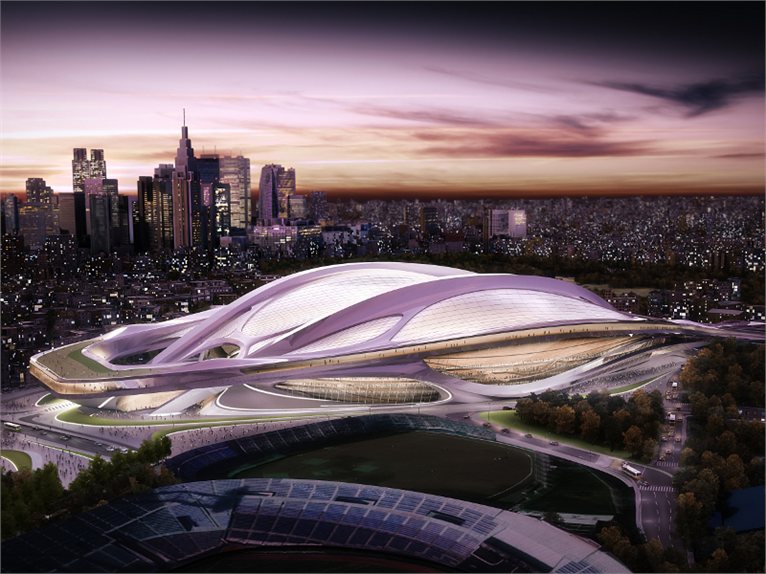 16/11/2012 - Zaha Hadid Architects has won the international competition to build the New National Stadium Japan. The Practice, which produced the London Aquatics Center for the 2012 Olympic Games, was selected ahead of 45 other international architecture firms for the US $1.62bn development.

The announcement was made in Tokyo by celebrated Japanese architect Tadao Ando, who chaired the judging panel. British architects Richard Rogers and Norman Foster were also judges. Making the announcement Mr Ando praised the fluidity and innovation of Hadid's design and how it complements Tokyo's landscape. "The entry's dynamic and futuristic design embodies the messages Japan would like to convey to the rest of the world," said Mr Ando at a press conference on Thursday.

"It is an honour for us to be selected to build the new National Stadium of Japan. I would like to thank the Japan Sports Council, the competition jury and the people of Japan who will enjoy this magnificent new venue. I have worked in Japan for 30 years. Our three decades of research into Japanese architecture and urbanism is evident in our winning design and we greatly look forward to building the new National Stadium," Hadid said. "The stadium will become an integral element of Tokyo's urban fabric, directly engaging with the surrounding cityscape to connect and carve the elegant forms of the design. The unique structure is both light and cohesive, defining a silhouette that integrates with the city. The perimeter of the stadium will be an inhabited bridge: a continuous exhibition space that creates an exciting new journey for visitors."

The competition rules specified the stadium must be able to seat 80,000 people; have a retractable roof, be environmentally efficient and complement the surrounding landscape. It must also be up and ready by 2018 to host the Rugby World Cup the following year. The construction budget is 130 billion yen ($1.62 billion).