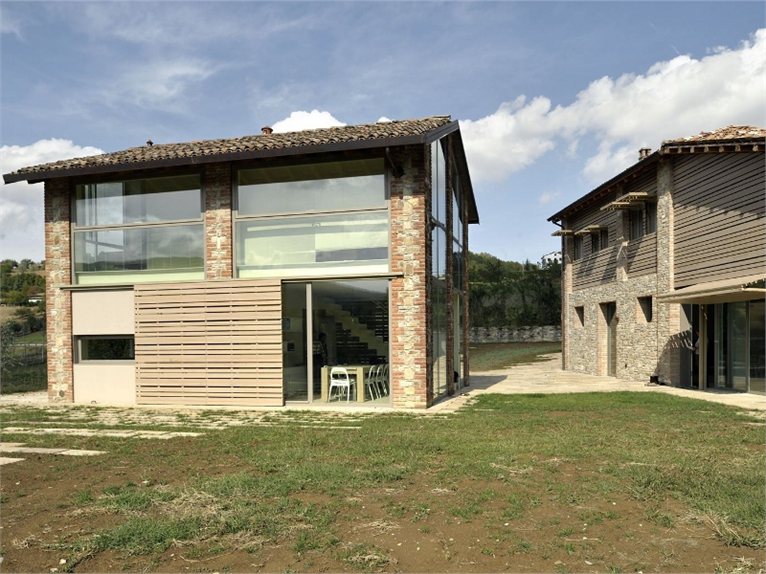 Casa Maloni, located in the village of Nibbiano on a farm area that slopes down to the left bank of the river Tidone, is a typical Apennine farmhouse in the Piacenza area, renovated by Sonia Calzoni architects.

The project came third in the National Bioarchitecture Awards Costruire nel Costruito/Recuperare l'Esistente 2011 (Building in Buildings/Recovering Existing Architecture 2011, organized by the Bioarchitettura® and the Italian National Institute of Architecture IN/ARCH. The official ceremony will be held on September 28th in Rome.

Casa Maloni is a complex structure, characterized by a stratified organism, resulting from the various expansions that the farmhouse has undergone in time to adapt to the agricultural context in which it was built.

Sonia Calzoni's recovery was mainly based on preserving typical local materials and the structural continuity of the building system. The project first of all involved the old barn, whose brick supporting structure and the roof tiles have been maintained. The spans, on the other hand, have been closed with glass panels and steel giving it the appearance of a transparent box.

As regards the restructuring of the larger building, two levels were created. Downstairs there is the living area, including the front porch and upstairs there are the sleeping areas.

The energy-saving objective of the intervention has led to the creation of thick walls and a ventilated roof with solar panels for hot water supply. Ventilation has been improved by carefully positioning new openings in the façade.

After analysing 63 projects, the jury of the National Bioarchitecture Award, made up of Carlo Albertini President of LegnoFinestraItalia, Paolo Buzzetti President of ANCE, Rob Krier, Wittfrida Mitterer editor of the magazine Bioarchitettura and Giuseppe Vallifuoco President of IN/ARCH Sardinia, awarded three prizes for quality of work: