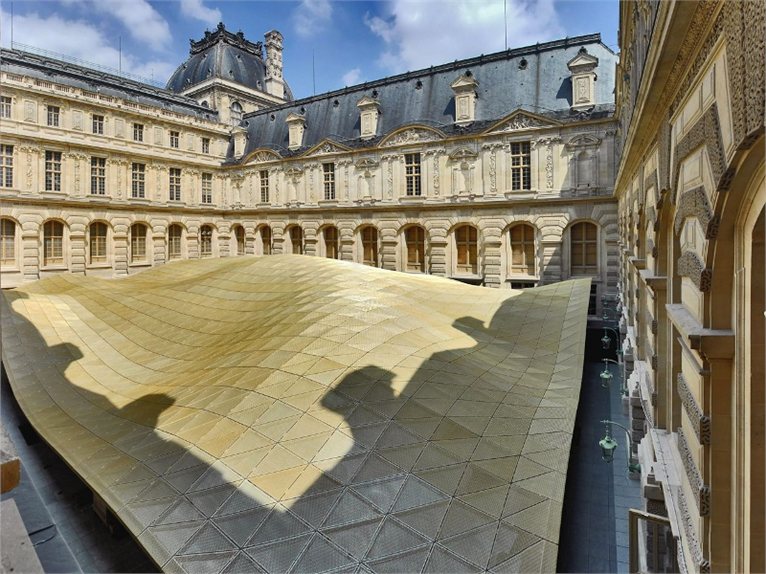 On Tuesday 18th September, French President François Hollande officially inaugurated The New Department of Islamic Art at the Louvre and tomorrow Saturday 22nd September, it opens to the public. Twenty-three years after the opening of the pyramid designed by Ieoh Ming Pei, Mario Bellini and Rudy Ricciotti have designed the museum's second and latest contemporary architecture.

Seven years of work, three years of construction, 6,800 square meters more for the French museum of which 3,800 of exhibition space, dedicated to hosting the prestigious collection of Islamic art, until now exhibited in narrow and inadequate rooms.

The new architecture is not a building in the traditional sense of the term, nor a simple cover of the courtyard: “We have not been inspired by any folkloric references, just a strategic choice: it would have been much easier to create a new space by covering the Visconti courtyard with a classic roof, but that would have exposed the art of Islam to an embarrassing promiscuity with the eighteenth-century features of the palace of the kings of France. On the other hand building a new small multi-storey building would have meant dispersing the whole collection on several levels. The solution to this dilemma was to create shawl suspended in a seeming emptiness which almost touches the floor at one point, without totally filling it or contaminating the historical façades”, explains Mario Bellini, who along with Renaud Pierard also set up the museum exhibition.

“A delicate gesture to befit this collection, keeping it suspended in a dialogue of semi-transparencies and light - but without incongruous interferences - with the eighteenth-century Visconti Courtyard, its façades and the Paris skyline [...]. The geometry of the roof, with its supple and almost textile appearance, is complemented by the continuity of the internal space with great showcases made entirely of glass, freely arranged like fish in an aquarium. Once again glass is called upon to vertically seal - set back from its outer perimeter - the entire roof with the floor of the courtyard. Here the challenge, set down and won, was to do it in a totally invisible way. Under the great cloak of the roof, the space was kept unitary with an always fluid and dynamic route. Some “gashes”, made on the courtyard level also open the view of the roof and the perception of natural light for the underlying level, generating an exhilarating sense of integrity of the whole museum space”.