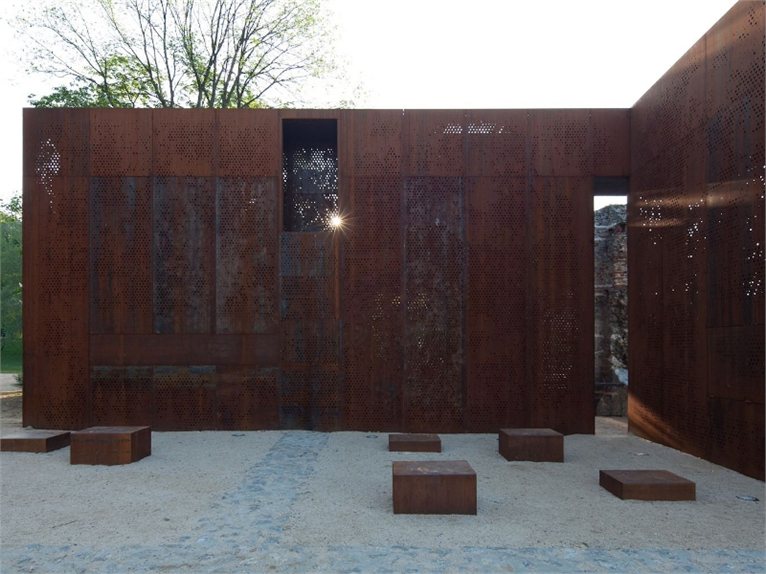 Architectural office MARP of Budapest in Hungary has decided to restore a specific role to the ancient ruins of Szatmáry Palace in Pécs, by reinterpreting a missing corner in a new monumental element capable of establishing a dialogue with both the natural environment and with what remains of the pre-existing architecture.

The reconstruction is, therefore, not meant to be a restoration of the original architecture, but rather as a new vantage point, in sharp contrast to the old part, which is deliberately incomplete.

The work of the Hungarian office is composed of several Corten elements: an 'L'-shaped open air structure, defined by perforated panels that enclose a hidden staircase with catwalk for a panoramic view of the surrounding park of Tettye valley; a floor that can be used as a platform for open-air theatre shows and seating for the scattered spectators made of regular-shaped blocks.

The sheets that make up the 'L'-shaped structure are perforated to allow on the one hand the light to filter inside the hidden staircase and on the other hand to favour the view through the metal frame into the inner garden.

The ruins of Szathmáry Palace represent one of the most precious monuments in Hungary and more precisely in Pécs, one of the oldest towns in the south-western region of the country. The ancient ruins are located in the park of Tettye Valley, where a local stone building on two floors and internal courtyard was built at the beginning of the sixteenth century.

During the Ottoman occupation, the building was probably used as a residence for the Turkish dervishes, was later abandoned and the condition of the building deteriorated considerably, until at the beginning of the twentieth century it was demolished, while the ruins were used until recently as a setting for outdoor performances.