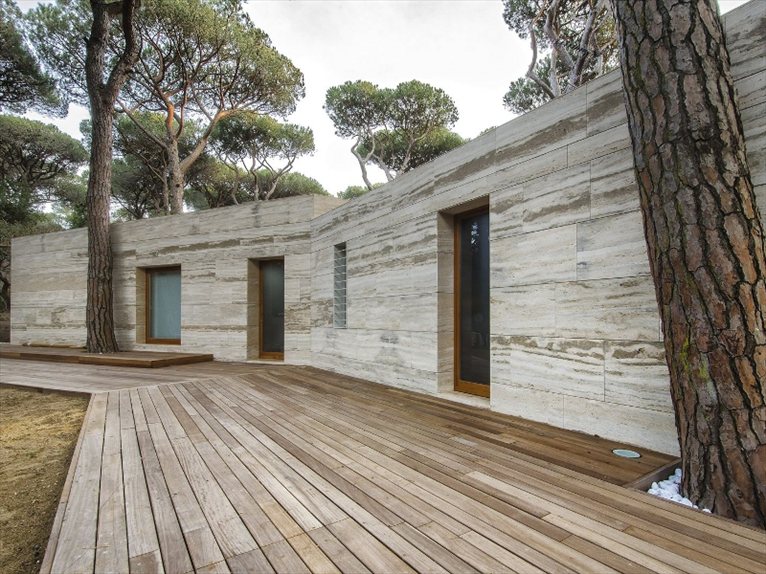 The House in a pinewood at Marina di Castagneto Carducci (Tuscany), designed by Fabio candido and Marco Sarri from sundaymorning architectural office and Massimo Fiorido Associati, comes from the renovation of a summer residence built in the mid-sixties.

The poor architectural quality of the existing building provided an opportunity for reflecting on the quality of the landscape in which the building is located, perched on a sand dune, surrounded by maritime pine trees located in unusual places, often very close to the walls.

The project outlines a dual perspective: on the one hand the need to find a synthesis between the nature of the building - although yet to be discovered - and the morphological and chromatic values of the place in which it is located, on the other the desire to characterise the interior environments in a tradition of comfort, domesticity and appropriateness. All this applies especially to the modulation of light and of views, to the extent and shape of the spaces, to the discretion of the materials.

An ideal longitudinal directrix, spanning the whole building, allows a convergence to be found between two significant operative aspects: first of all redefining the interior space, which consists of a sequence of rooms in close relationship with each other and with the surrounding landscape; secondly, the identification of the character of the building in a new morphology, both natural and archetypal, which finds its new expressive character in the horizontal sediment.

The criterion of remodelling the openings in the body of the building, which are almost all different from one another, comes from these thoughts. However they are built taking into account both the sequence of the interior environments and the relationship between the room and the outside, as well as the balance of the mass/space ratio of the building. This is most evident above all in the large window of the dining room that, after a series of openings of the same size, frames a view of the dune landscape.

The emergence of the archetypal character of the intervention is manifested in the new morphology of the building mass, which highlights the double pitched roof and a certain compactness in two terminal fronts – while these formal features are mitigated in the central mainly horizontal part.

The material used for the outer cladding, a striated travertine stone, helps to read the morphology of the building as an ideal mass resulting from various sedimentations, also blending its colour into the surrounding landscape. The limited range of materials used - travertine stone, also present in the interior claddings, plaster, teak wood, used to give continuity to the interior and exterior horizontal planes - helps to make the house a presence in the pine forest that thrives on a sophisticated ambiguity: while offering a comfortable refuge from the outside world, it also introduces the surrounding landscape into itself.