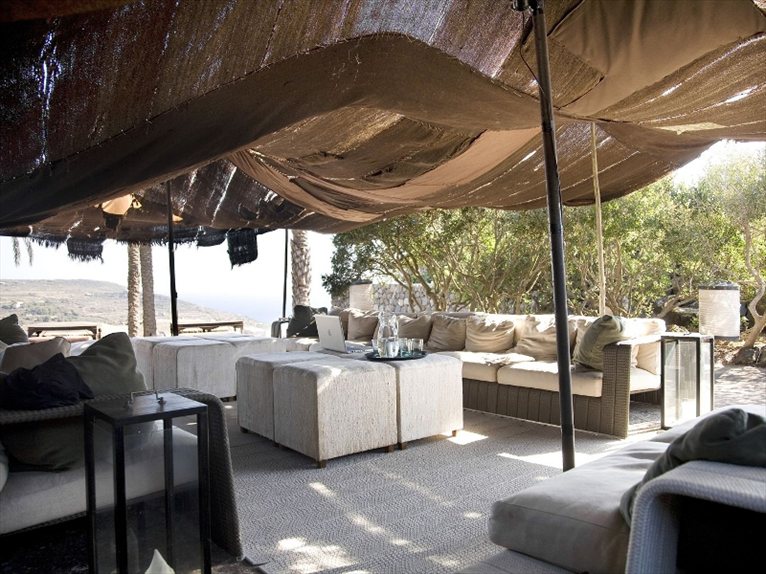 “It is innocent, a project that does no harm, does not take anything from the landscape, adding only fragments.” These are the words which the architect Flavio Albanese uses to comment the project of his Casa Albanese in Pantelleria, a summer retreat in the wild landscape of volcanic rock.

Architect Albanese's buen ritiro in Pantelleria is the result of renovating a series of dammusi (traditional houses of the island of Pantelleria), perched on a terraced hill, from which you can just about make out the African coast.

The Pantelleria dammuso is local lava stone construction, with a double drywall, characterized by a rectangular plan and a domed roof – less frequently barrelled – white-washed and used for collecting the rainwater that fill tanks.

Architect Albanese's project envisages the renovation of the existing dammusi, with the integration of new spaces, that the architect defines symbolically “fragments”, made with traditional techniques and materials.

The result is a “Casbah”, created by alternating volumes, internal courtyards and open-air living rooms protected by coarse linen curtains or naturally shaded by palm trees.

“The whole body - ASA Studio Albanese explain - develops around a central main apse-shaped building, with barrelled vault called Basilica, which houses the architect's office. The compact density of the Mediterranean matrix finally ends with the large tuff-stone square, where a 25-metre long infinity pool is limited only by the horizon and the view of the Mediterranean”.

The bottom of a natural crater has become an open-air theatre for cinema, music and theatre performances that the architect likes to offer his guests: “A long tuff stone walkway connects these buildings to other small dammusi - guest rooms, and beyond them, leads to a gentle drop generated by a volcanic depression, where the arena, which offers open-air performances and film forums on warm summer nights, is located.”

The Pantelleria Casbah completes a balanced mix of tradition and innovation, both in materials and furnishings. Ancient Indian tables, Kurdistan linen covers, old ethnic furniture, floors decorated with 19th century floor tiles recovered when the dammuso was renovated. But, there is also contemporary furniture by designers like Driade, Paola Lenti and Bonacina. The project also contains contemporary works of art, with the site specific installation “Scirocco circle” by Richard Long, photographs by Helmut Newton and Christian Boltansky, works by Bartolini and Sozzi, and Olafur Eliasson's installation, all coming from architect Albanese's rich collection.