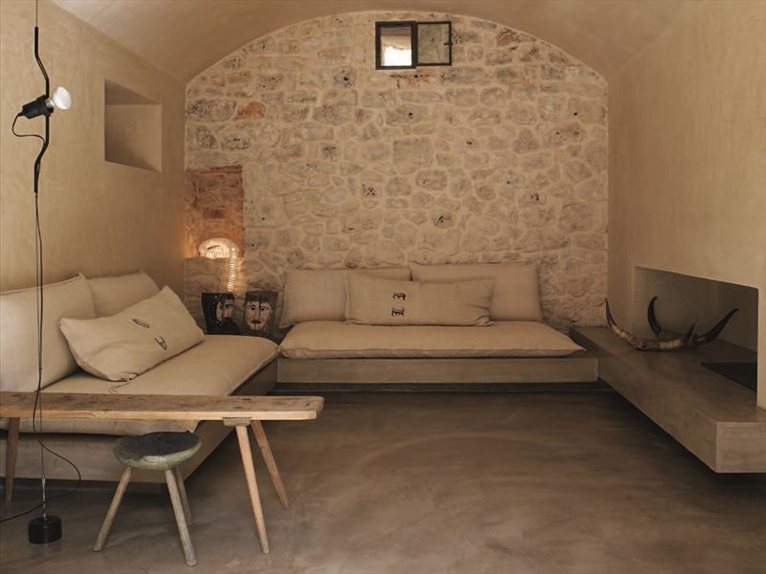 Architect Luca Zanaroli from Emilia in Italy has just completed the renovation of a small Saracen trullo (local rural building ) in the countryside of Ostuni, in Puglia southern Italy. The client had purchased some land with olive trees and almond trees, and the trullo almost at the entrance to the property had been left in a state of abandon, with an adjacent structure, a lamia (outbuilding), of which only part of the perimeter walls remained.

The project focused on renovating the existing buildings and the possibility of making an extension to triple the existing area (originally just under 40 square meters ) to create at least four bedrooms.

Luca Zanaroli says “The intention was to prevent the added building from somehow overwhelming and having a negative impact on the existing structure, whose shape and relationship with the surrounding space, I wanted to keep intact, well-defined and recognizable. I wanted to avoid, as far as possible, upsetting the established balance between voids and fills, between mass and air that had been created and settled in time. In other words, the new structure was not intended to "choke" the old one. Quite the contrary, by connecting to it, it was to be on the one hand its organic completion and on the other, its “means of contrast”. By altering the contrast between the existing structure and its surroundings, I wanted to bring out those details that otherwise would not have been appreciated or difficult to read. I, therefore, looked for a language as neutral and straightforward as possible, although quite different, to define the new volumes. As a “hinge” between the old and the new building, I used a building with an elementary shape, slightly withdrawn and lowered, which would allow the ancient stones of the wall on which the new building is grafted to “breathe”, by using large voids and large openings. While the deliberate contrast visually and stylistically breaks with the past, the homogeneity and continuity of materials and colours of the internal and external surfaces, and paths make the space fluid and enhances the transitions between the different bodies, styles and languages.”

The internal surfaces, both the floors and the walls covered with mortar, link the different volumes and at the same time softly reflect the abundant natural light that enters from the south.

The interior design is characterized by the choice of “contaminating” the rural atmosphere with the use of colours and materials such as iron sheets (untreated and oxidized) used on the neutral and minimal kitchen cupboards, which fit harmoniously into the environment without altering the original quality and features, but enhance them. The furniture is minimal and is an integral part of the building fitting in perfectly with the architecture. The objects, all local handcrafted ones, are the result of personal research carried out by architect Zanaroli in the local territory.