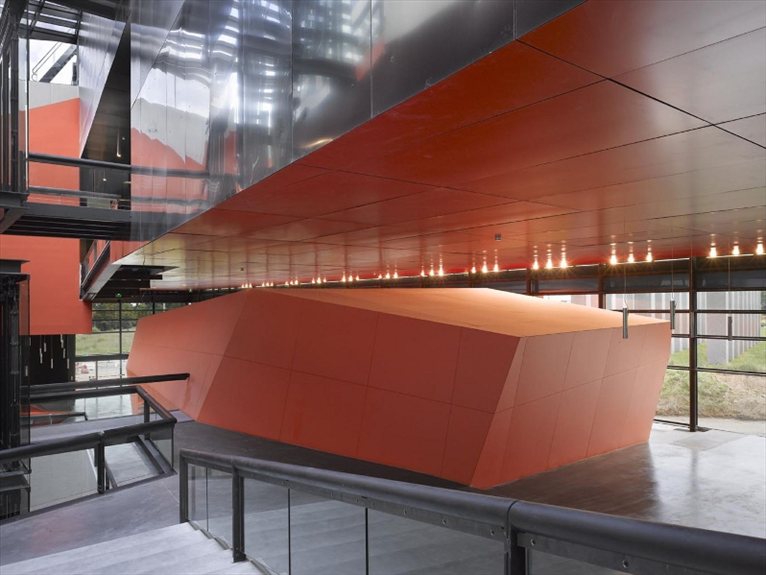 The whole project reinterprets the seemingly irreconcilable duality between being inside an urban reality and immaterial escape, something halfway between the natural and the artificial, the heavy and the light, shadow and light.”

All spaces, the entrance, the foyer, the ramps, the gangways, the upper terrace, help to engage the visitor in a long journey through the building. A stroll to enable new discoveries in a space, which is neither central, or static, which generates a series of perspectives. Pushed up towards the top or down towards bottom, they are always tangential consequential and interrelated points of view. The aim is to involve the visitor in a constant discovery that turns walking into an event.

The FRAC immediately appears as a single block with a high prevalence of black material with its density and the gradual change from opaque black to the transparency of glass, as a combination of heaviness and lightness, between untreated and sophisticated, in a sort of “gravity in suspension.”

Coming from the city, the museum looks like an enigmatic black-blue steel block, which seems to float and unfold, gently revealing the intensity of its interior, characterized by a large red painted volume that houses an auditorium. When struck by the sunlight the dark grey glass façade is almost reflective and only reveals part of the real building. Only at nightfall does the façade “perceive the fire burning inside. It is only then that the atrium inside and the intensity of its colours emerge with force.”

The vertical crack, the gap created in the rectangular monolith generates an opening towards the inside, portraying the tension between the "above" and the "below", revealed in the atrium between the red background of the large showroom and upper parts of the conference room.

The attraction, generated by walking down long staircases suspended around the atrium, transforms the FRAC Bretagne into a vertical landscape with different itineraries to experiment the building, its activities and exhibitions.