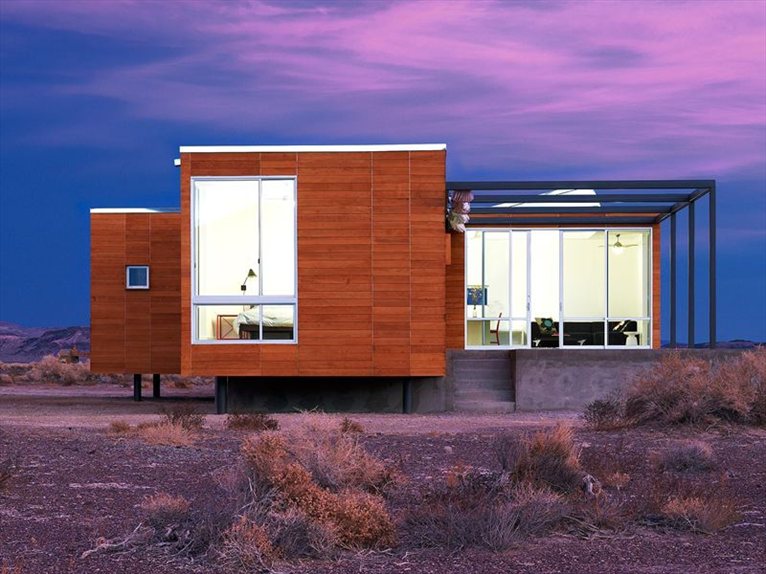 Rondolino Residence is a prototype prefabricated house designed by Nottoscale. Fabrizio Rondolino, a freelance writer from Rome, had commissioned a prefabricated house, isolated in the Nevada desert, near Scotty's Junction to Peter Strzebniok. The challenge, dictated by the remoteness of the site and the wild west mentality of local entrepreneurs, was completed in December 2010 after a process in which client and architect communicated exclusively by email without ever meeting or speaking to each other.

The site is a plot of land, isolated and far from any infrastructure or settlement. The architect also had to plan a path that led to the site, dig a well and bring electricity there. After having spent a few days on site, Peter Strzebniok positioned the building in order to take full advantage of the surrounding landscape, studying the winds and the existing trajectory of the sun.

The client, a desert lover, wanted a holiday home in the middle of it and asked for the panoramic views to be incorporated in the interiors and to merge with the exterior. The house, about 110 sq. m in size, has 3 bedrooms, two bathrooms, a study, a storeroom, a large open space kitchen, a dining room and living room that can be extended outside when the large sliding doors are open. In order to minimize the envelope the rooms have floor to ceiling windows to give the area a greater feeling of spaciousness, as well as the possibility of visual connection of the interiors with the desert landscape.

A large outdoor deck made of concrete and wood accommodates a sunken whirlpool tub that seamlessly creates a transition zone between indoors and outdoors.