M+ is not just another museum. M+ is a cultural center for 20th and 21st century art, design, architecture, and the moving image. As such, it embraces the entire spectrum of spaces, means of display and activities related to exhibiting and viewing these media. The spaces range from the conventional white cube, reconfigurable spaces, screening rooms and multipurpose facilities to so-called third spaces and even an “Industrial Space". It was the special request for this “Industrial Space” that motivated us to take a closer look at the specificity of the center’s future location. How should a post-industrial space be created from vacant land? A mere 20 years ago, the ground occupied by the West Kowloon Cultural District (WKCD) was part of the seaport. Section by section, the land has been reclaimed from the sea and the natural harbour filled with earth. This artificial piece of land is now the construction site for the new buildings of the WKCD. What can lend authenticity to reclaimed land? Paradoxically, yet another work of engineering defines the specificity of this place: the underground tunnel of the Airport Express. Initially an obstacle that complicated planning, this distinctive feature has become the raison d'être for our project, consisting of a rough, large-scale exhibition universe that quite literally anchors the entire building in the ground. By uncovering the tunnel, a spectacular space is created for art and design, installation and performance; the excavations reveal nature of a “second order”, a “Found Space” that is a challenge to artist and curator alike, a space of unprecedented potential. Combined with an L-shaped Black Box, a reconfigurable Studio Space, direct access to the loading dock as well as a large part of the storage area, a sunken forum and (exhibition) topography have been created. These are not only tailored to the needs of art and design in the 21st century, but also set the stage for a unique art experience, inseparable from the specific character of this location.

The horizontal building hovering above this “industrial” landscape houses the more conventional display spaces. As in a city, the arrangement of all the galleries is based on an orthogonal grid. A central plaza provides direct access to the entire exhibition area. This includes not only the temporary exhibitions but also a clearly defined Anchor Room. A tall “Focus Gallery”, with two lateral bands of daylight just below the ceiling, rises out of the horizontal exhibition building and plugs into the lower part of the vertical staff and education building. A sequence of galleries is accessed from each of the four corners of the central plaza. A specific space introduces each sequence: an elongated sky-lit gallery, a courtyard with direct access to the roof terrace, a room with extensive glazing towards West Kowloon Park and an auditorium facing Victoria Harbour. They distinguish and structure the sequence of exhibition spaces, which can in turn be combined or divided into smaller units by additional third spaces. The galleries themselves may be illuminated from above or from the sides; they may be introverted or extroverted. A variety of precise openings in the façade frame views of the Artist Square, the Park and the skyline of Hong Kong Island across the harbour.

In the joint between the “Found Space” and the lifted horizontal exhibition building, there is a spacious entrance area for the public. Instead of building a solid object that blocks off access, light and views, this covered area forms a bright, welcoming platform that can be entered from all sides and levels: open and transparent yet shielded from direct sunlight. It is a forum and focal point between the West Kowloon Cultural District and the Park, the newly built Avenue and Victoria Harbour. Here, visitors encounter all the uses and activities of M+ at a single glance. Specific functions are assigned to each quadrant of the platform. The museum shop is situated in the corner next to Artist Square. The large temporary exhibition space faces the Park and is accessible directly from the main platform. Overlooking the waterfront promenade and Victoria Harbour, there is the auditorium on one side, and on the other, the glazed Learning Centre with a public courtyard leading to the rooftop terrace. Ticketing and information desk are located in the center of the lobby. A broad diagonal opening in the floor of the platform affords a view of the excavated “Found Space”, while large ceiling cut-outs allow visitors to see the exhibition level and its intersection with the vertical building as well as a view of open skies.

The diaphanous vertical extension of the M+ building is centered on the horizontal slab of exhibition spaces. The two elements form a single entity, fused into the shape of an upside down T. Built to the height specified in the master plan, this thin and long vertical structure provides research facilities, artist-in-residence studios and a curatorial center where natural filtered daylight and expansive city views make researching, learning and working a special experience. A member lounge and public restaurants with panoramic views are housed on its top floors. Integrated into the sun-shading horizontal louvers of the façade facing the harbour, an LED lighting system activates the building as a coarse-grained, oversized display screen for selected or especially commissioned works of art and establishes M+ as part of the Victoria Harbour skyline.

The resulting structure is not simply anchored in its surroundings; it is also formed by them. The precise and urban, almost archaic shape reiterates the iconic character of Kowloon’s skyline on one hand, yet on the other hand, this convention is subverted by the transmitted message of the art, visible from afar, which will consequently make M+ a site of constant renewal, rather than being locked into a predefined form. This is a universal place with an inner organization whose openness and transparency make it possible to link the complexities of the content and the space in many different ways. Through its specificity, it becomes a distinctive, singular and unmistakable piece of Hong Kong. But above all, M+ is a public forum, a built platform for the exchange, encounter and activity of people and art.

For the M+ project, Herzog & de Meuron have formed a design team with TFP Farrells as local partner architect and with ARUP HK as an engineering consultant. This global team combines wide international perspective with deep local knowledge of Hong Kong and comprehensive experience in the development of the West Kowloon Cultural District site. 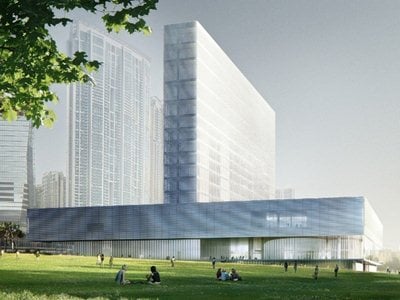 The West Kowloon Cultural District (WKCD) project has been unveiled

M+ is not just another museum. M+ is a cultural center for 20th and 21st century art, design, architecture, and the moving image. As such, it embraces the entire spectrum of spaces, means of display and activities related to exhibiting and viewing these media. The spaces range from the conventional white cube, reconfigurable spaces, screening rooms and multipurpose facilities to so-called third spaces and even an “Industrial Space". It was the special request for this “Industrial...