Addition of Madrasah to Al Mukminin Mosque The Project in Singapore A mosque in Singapore is a sort of community centre, housing a madrasah, conference halls, social spaces and offices plus the main prayer hall, used day and night. The madrasah extension maximises to the limit what the planning authorities can allow – 4 storeys and a basement. Existing Context The most important is the existing prayer hall with its prominent fan-shaped roof. The architects’ choices: to enhance its independence or reverentially engulfing it? Their choice is the latter - flaring open the ends of the corridors of the new block and stretching its new staircases to enwrap the old hall. The staircases flanking the opposite ends of the new block are expressed as sturdy towers, and portals of the new wing. The widened ends of the corridors are also used as external spaces of the classrooms. Arabesque of Islamic Colours As Backdrop Beyond space provision, it seeks to explore the universality of Islamic principles in creating buildings that transcends artificial cultural barriers. The use of arabesque patterns and dematerialisation techniques are highly evident in this project. The underlying exploration in the project is the use of Islamic colours which primarily focus on ‘earth’ colours such as colour of water, sky and ground. The juxtaposition of the multi-shade colours on the aluminium louvres are designed to create a mottled effect from far, to create dematerialisation, an ancient technique often used in Islamic buildings. The intricate composition of turquoise, yellow and blue - dominant colours in Islamic buildings - convey a sense of depth and animation to a flat surface, also visible through the skylight gap between the old and new block. This sweeping curve of coloured metallic louvers act as a new backdrop to the original fan shaped roof. Climatic Response The aluminium screen louvers along the curved façade are designed as bent sheets with deep overlapping overhang. This effectively screen off the harsh afternoon Sun whilst allowing ventilation into the corridor behind and not allow monsoonal rains to beat in, which is common in the tropical climate. The is important as corridor adjacent to the madrasah classrooms is used as spill over activity areas. The irregular random cut out from the aluminium screen louvers also allow the children to peep out in the spirit of adventure and play while the juxtaposition of colours (the bent aluminium louvers are coloured on both sides internally and externally) act as a colour back drop for the madrasah spill over areas. Junction Between Old And New The Client has chosen to retain the existing main prayer hall for sentimental value, sense of continuity as well as historical value as the existing mosque was one of the earlier ‘modern’ mosque in Singapore nation building history. As such, the interface between the existing prayer hall and the new madrasah is through a glass skylight; the precise and complex meeting point between new and old - the geometries of a jagged roof delicately reconciling with the arc of a curving plane (the architects’ respect for antecedent is best perceived). Urban Responses, Façade to City (Jurong East Central) The new block, a taller entity is also situated at the defining junction of the site, where for all, the first acquaintance is its new face: a “head” to the block, (the minaret and the offices) and a “rear” at the other end (the toilets) where the dominant lines are the verticals, with a playful staggering of fixed windows to weave it back to the expression on the other facades. A concern for overall massing can also be seen in how the heights of the new minaret, new block and old hall are successively lower the further they are from the road junction. Each of its façade is treated in a different manner from the other, responding to different parameters. The “head” section, a semi-cylindrical form houses the administration reception, the meeting room, the library, the conference room and a roof top play ground. It is covered with expanded metal mesh screen so there is a visual connection from the external to see the on going activities from the road junction. It is in turned anchored by the minaret in folded stainless steel sheet. This acts as an anchor and symbol of the mosque from the main road junction and from the surrounding, especially from the mass transit line across the road. The long façade fronting the Mass Transit line, blank except for 5% of windows (a fire requirement) which became an opportunity for pattern making - a monochromatic palette setting off against its colourful counterpart. The dominant motif - a diagonal splay playing upon the dynamism of the passing trains, its shiny stainless steel reminiscent of the ‘songket’ fabric, a traditional Malay deep coloured fabric with gold or silver treads. The first storey is designed as a community ground with minimal walls and large overflowing foyer and corridor to cater to mass congregation. This also acts as an open and inviting space with ample cross ventilation during mass congregation and prayers especially during festive seasons. To allow sense of orientation for prayer given the existing pentagon shaped is centric form, the open foyer and corridor is layered with an intricate floor tiling pattern which is based on the ‘saf’ (individual allocated prayer mat space).
10 users love this project 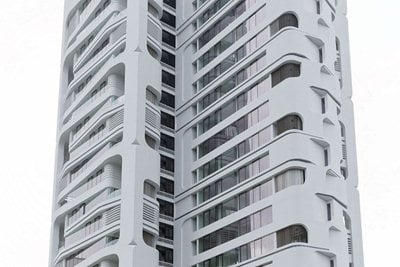 Travelling with an architect: discovering Singapore

Addition of Madrasah to Al Mukminin Mosque The Project in Singapore A mosque in Singapore is a sort of community centre, housing a madrasah, conference halls, social spaces and offices plus the main prayer hall, used day and night. The madrasah extension maximises to the limit what the planning authorities can allow – 4 storeys and a basement. Existing Context The most important is the existing prayer hall with its prominent fan-shaped roof. The architects’ choices: to enhance its independence...