The new Bauhaus Museum Dessau links an iconographic heritage ("Less is More") with a manifesto of contemporary culture ("The Age of Less").

A bridge structure in which the collection will be presented, as a closed body hovering over a permeable public space for temporary exhibitions, events and workshops.

The glass covered and protected volume allows the continuity of the Bauhaus not only as part of the museum activities but also as part of the city of Dessau.

On the one hand, the volume includes an urban space, on the other hand, its transparency allows an interaction between street and museum, between city and park.

Our project offers playful contrasts as heaviness and lightness, opacity and transparency, system and flexibility, order and spontaneity.

The museum is an instrument and a catalyst for expressing activity and productivity, creativity and social interaction that altogether corresponds with the idea of the Bauhaus.

The new Bauhaus Museum Dessau is a clear and simple volume located between city and Park, construction and nature.

Its position, a little set back from the former historic building line, suggests a continuation with the city urban legacy. The building has an intermediate urban scale, between the size of a building and the size of a city block.

Its position and dimension – the longest possible – acts as a city limit, which demarcates city and Park.

Its four facades, oriented towards the four cardinal points, reflect the qualities of its position.

The western facade, towards the park, is influenced by the reflection of nature and acts as a background for outdoor gathering and activities.

The northern facade, in Friedrichstrasse and in front of the Post Office building, is devoted to logistics and administration.

The southern facade, facing the Stadtgespräch fountain, promotes social interaction through some Museum activities like workshops and other cultural events.

Inside the glass box, the collection is concealed in a black beam structure supported by two boxes that contain the staircases. The space between this suspended beam and the glass box is a highly flexible, easy to configure and reconfigure space, thanks to a system based on a virtual grid, which is the result of a regular geometrical subdivision of the structure. This feature ensures the highest feasibility in terms of time, cost and building quality.

The visitor's entrance, located where Ratsgasse and Stadtpark meet, is part of the main central interior space, or 'Stadtraum' as we have called it, a vast space for gathering and exhibitions between the park and the city.

The permanent collection is placed in a monolithic, hermetic and column-free hall in the upper level, accessed via stairways and lifts located in the two supports.

The linear room of the collection is divided with a flexible floor - to - ceiling curtain rail system.

These monumental curtains, of different colours and materials, endow each area with an independent mood. Each set of curtains defines two zones: an autonomous central room (in the case of three-dimensional exhibitions or displays) and a surrounding, corridor space (for more planar exhibitions, introductory text posters, timelines, etc.).

This curtain system acts as a reminder of the Bauhaus legacy and allows for an easy reconfiguration of the space.

The temporary exhibition is underneath the Collection, which is also part of the 'Stadtraum'. It sets a dialogue with the immediate urban reality while allows the facade to change its appearance with each new exhibition.

This exhibition area is equipped with "pre-display" elements which are devices with the shape of rudimentary, mobile, and specifically designed elements; for example, pedestals and plinths, hinged partition walls, a gridded ceiling, beam structures and column-like pieces.

Some of these "pre-displays" are permanent in nature and located intentionally to demarcate the smooth transition between city and park, inside and outside.

The Museum’s Logistics, Administration and Education areas are placed at the ends of the “Stadtraum”. The divisions for the Logistics area in the Northern facade are made of a bright-coloured metal framing that follows the underlying grid of the building, while in the Southern Facade the grid is followed by a system of curtains and mobile partitions for the Museum Education areas.

The 'Stadtraum' is a well-tempered environment thanks to the glass membrane, equipped with solar protection to preserve the Collection and provide continuity between inside and outside.

Thanks to its location and recognisable, quiet presence, the Bauhaus Museum will play a key role in Dessau's urban identity as an instrument to express activity and productivity, creativity and social interaction. 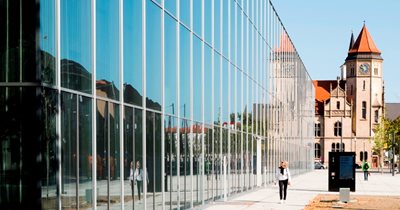 The Bauhaus Museum Dessau is open!

The new Bauhaus Museum Dessau links an iconographic heritage ("Less is More") with a manifesto of contemporary culture ("The Age of Less"). A bridge structure in which the collection will be presented, as a closed body hovering over a permeable public space for temporary exhibitions, events and workshops. The glass covered and protected volume allows the continuity of the Bauhaus not only as part of the museum activities but also as part of the city of Dessau. On the one hand, the volume...