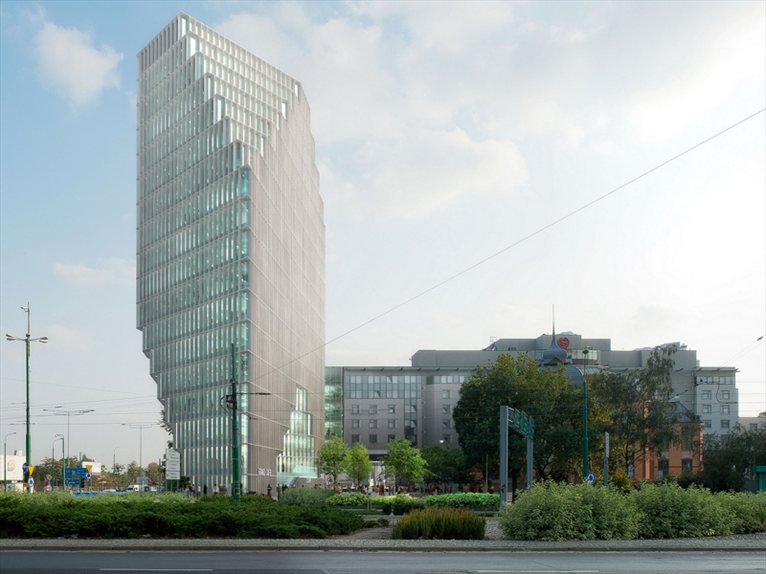 Poland is the only country within the Continent to have confidently withstood the widespread financial and economic crisis that appeared on the horizon in 2008. No wonder global investors are beginning to perceive Poland as a ‘green island’ amid economically challenged states all around. Additionally, the Polish economy is picking up and this is accompanied by a relatively stable bank system which has also helped Poland to stay clear of the property bubbles suffered by some European countries in the recent past.

Baltyk Tower is the first building by MVRDV in Poland, to be realised in the Polish city of Poznań. The office tower with a total surface of 25.000 m² will be located at Rondo Kaponiera at the Eastern entrance to the historic city and will feature retail and a panorama restaurant with a proposed one room hotel. Completion is scheduled for 2014.

The tower’s volume follows the maximal volume and height restriction of the site. This leads to a shape resulting in a totally different contour when approached from different sides. Towards the south a slope of cascading patios will offer outside spaces to the users of the building. The façade is envisioned floor-to-ceiling glass with vertical louvers of glass fibre concrete softening the impact of the sun without losing the vista over the city and zoo.

The 25.000m² are divided into 12.000m² office space, 750m² panorama restaurant featuring most likely a one room hotel, 1350m² retail in the plinth of the building and three levels of underground parking. The flexible office space is limited to a depth of seven metres allowing daylight to generously penetrate the work spaces.