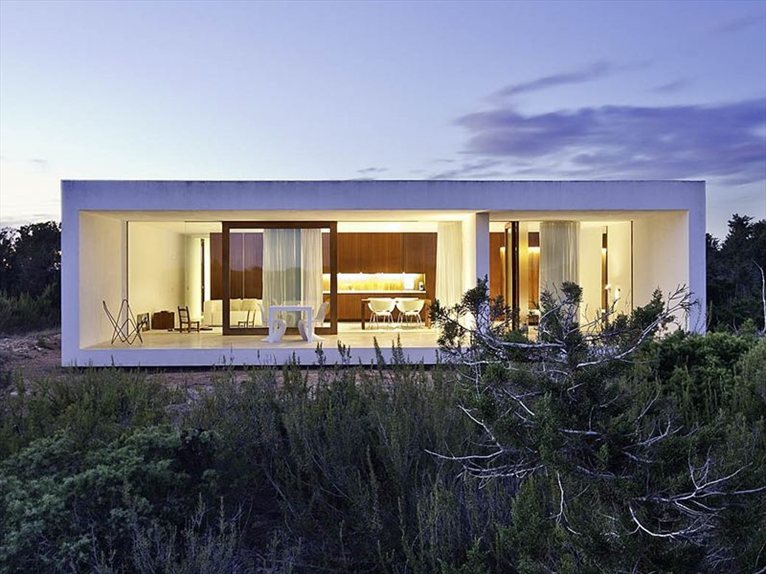 Architect Marià Castelló Martínez has chosen the island of Formentera to live and work and since last year Es Pujol de s’era has become his home and office. The building is located in a highly representative inland part of the Balearic island of Formentera, characterized by wheat and barley fields, a small Mediterranean pine tree wood, rosemary and juniper bushes and drystone walls on an almost flat landscape.

The building is sheltered by the trees and by a fragment of drystone wall that mark its boundary, the orientation, and the total height of this building with its austere geometry that has affinities with the traditional architecture of Formentera.

A traditional dry stone wall defines its alignment in the territory and it becomes part of the north-facing part of the building. An old chapel, on the other hand, defines the longitudinal axis of the building, providing a reference of constant dialogue with the outside and the inside. This architecture seeks a context by relating with the environment, although it avoids trying to merge in with it. The north-south orientation gives rise to a duality that the project set out to achieve and which is synthesized radically in the plan: to separate the public activity from the private one. The northern zone is the most exposed and is it houses the architecture office, while the southern one, of identical size, is designed as a small dwelling-refuge.

Besides seeking the sunlight, the orientation of the building is aimed at appropriating the small Mediterranean pine wood, rosemary and juniper bushes, as a native garden, requiring no transformation or maintenance and ensuring a high level of privacy.

The volume is defined by brick envelope coated with reinforced concrete. The interior features white walls, glass and iroko wood and simple furniture in harmony with the environment.