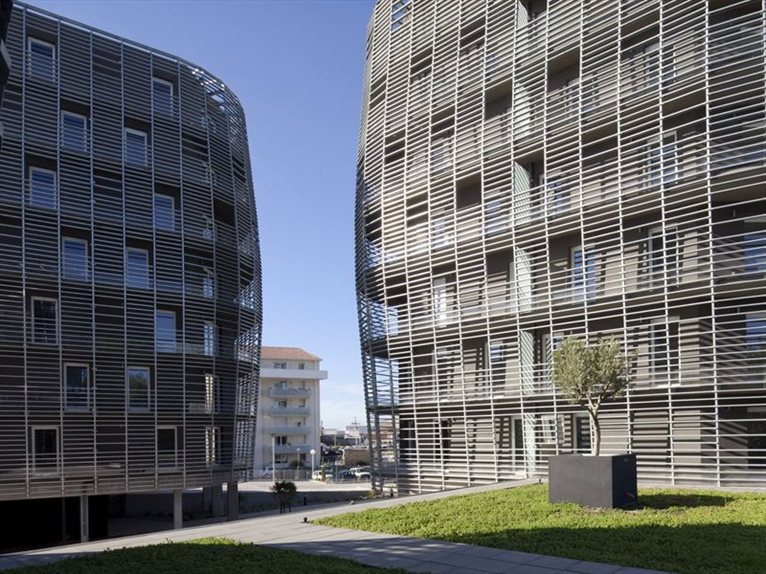 Paris architects Colboc, Franzen & associés have developed a porject of Apartments and offices closely integrated into the landscape of Sète in the South of France. The work is located on the narrow strip of land between the salt lake of Thau and the Mediterranean Sea, at the northern entrance of the old town and near the commercial port and its huge industrial structures.

Sète is the second largest Mediterranean port in France, located in a strategic position on a narrow strip of land a few kilometres from Montpellier. The writer Paul Valéry, the city's most illustrious son coined the term “île singulière” to describe it, where “île” means island and “singulière” can be translated with various terms like different, strange, unique, astonishing … basically anything but banal. The famous French singer and poet Georges Brassens was also born in Sète and like Valéry he also had Italian origins. Indeed, at the end of the nineteenth century a lot of immigrants went there from Italy, especially from nearby Liguria, and from the French island of Corsica, although Brassens' mother came from Basilicata in southern Italy.

This project consists of three buildings completely covered with brise soleil, giving it a sculptured appearance, resting on a platform which houses shops and a carpark. The three enormous “steel cocoons” fit into the specific landscape of the commercial port and from the balconies you can enjoy an unobstructed view over the sea and the old city centre.

These blocks also represent a reinterpretation of “Mediterranean architecture”, attuned to the particular ways of life associated with this climate, first of all the habit of living outdoors, with the consequent need to protect themselves from the heat. The brise soleils meet with this requirement, and ultimately let you use the balcony without disturbing the neighbours, even visually. With their material evoking the maritime world, thanks to their boat hull shape and to the sound produced when the wind blows, reminding of the the rattling of the masts in the port.