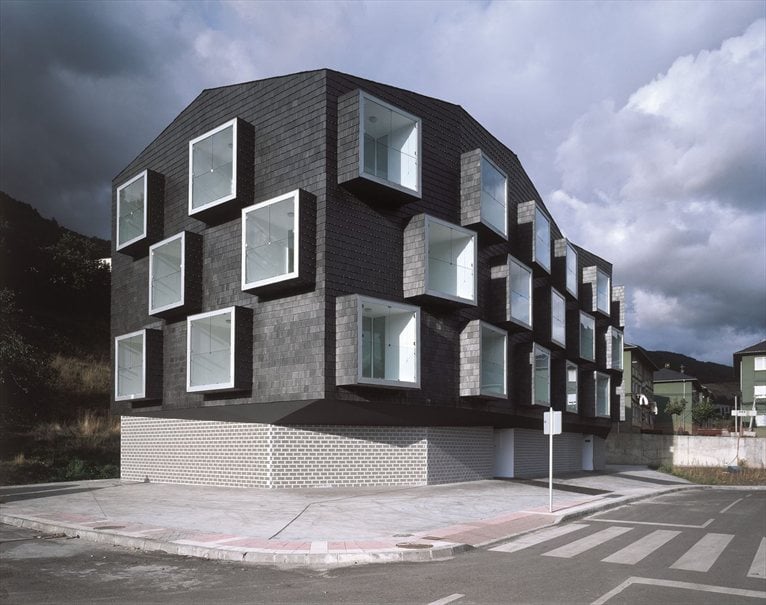 Fifteen mine-workers' apartments have been designed by zon-e architects in the mining town of Cerredo, in the Cantabrian Mountains, where there had been no new residential development for over 25 years.

The new building was designed to connect two existing urban contexts: the irregular and chaotic urban fabric of the old part of the town and the rigid and regular mining district. The answer is a volume that is mid-way between the two contexts, where the fragmentation of the original village and the solidity of the modern residential blocks coexist.

This volume has an angular profile. It is a "crystallized" geometry resulting from application of building regulations. The result is a blend of a petrified object, a mountain and a disturbing floating body on the hillside. This dark"crystallographic" object is like a piece of coal, it absorbs nearly all light that strikes it, reflecting only a small part and showing its rich geometry. At night, light makes the internal geometry of the building more welcoming and soft. The feeling of a "floating object" is accentuated by the fact that the basement is set back from the floors above it.

The building proposes to mediate the difficult dialogue between the various construction models. Its glazed galleries, a modern version of the traditional ones, focus on retrieving and updating the use of a space which has now fallen into disuse, despite its architectural qualities. The exterior appearance of the building, in its material logic, establishes links with the traditional buildings of the area and with the ubiquitous mountains of coal from the nearby mines. However, the use of slate, beyond fostering the contextualization of the work, allows considerations to be made on the construction characteristics of a material repeatedly used in a conventional manner, but whose versatility is surprising.