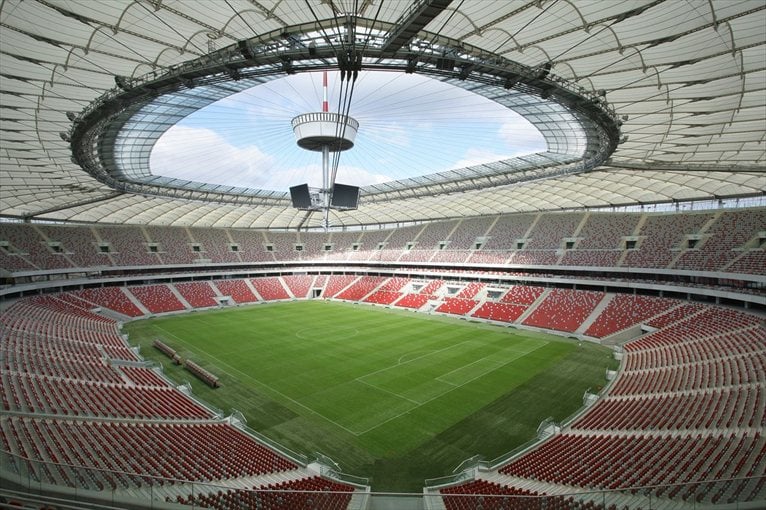 Euro 2012, the 14th edition of the European football championships, kicks off today with the first match in Group A between Poland and Greece. The match will take place in the newly built Narodowy National Stadium in Warsaw Poland which was designed and planned by the architectural consortium of JSK Architekci Sp. z o.o., gmp Architekten and Schlaich Bergermann und Partner GmbH and built by Alpine Bau in collaboration with two Polish partners.

It was built on the site of the old stadium which had been abandoned for sports use in 1988. The new stadium, on which work started in 2008, was completed earlier this year and on Sunday 19th January 2012 a huge number of people turned out  to attend the opening ceremony of Poland's largest stadium. However, only the first 40,000 to arrive for the official opening were treated to a memorable free music festival with performances by several well-known and diverse Polish bands. The first football match was played on 29 February 2012. The match between Poland and Portugal ended in a 0-0 draw.

The old stadium, however, will be sadly missed because of the memories it conjures up. Its name “Tenth Anniversary Stadium” recalls the tenth anniversary of the “Warsaw Uprising” of 1944, when the Polish Resistance Home Army attempted to liberate Warsaw from Nazi Germany before the Soviets, who were advancing on the city, in order to maintain Polish sovereignty. However, the Soviet army stopped at the city limits, refusing to send air support and the Resistance was crushed by the Nazis, leading to the death of 16,000 members of the Polish resistance. Then, on a happier note, in 1983 Pope John Paul II (Karol Józef Wojtyła) the first Polish pope held mass to a congregation of 100,000. It held its last international match that year but then fell into disrepair, and since 1989 it had been home to a bazaar.

The match will be preceded, 20 minutes before kick off, by a 12 minute opening ceremony involving over 800 volunteer performers from 63 different countries. The ceremony will combine heritage and innovation to bring together culture and sport in this historical moment when central and eastern Europe hosts this event for the very first time. It will promote key UEFA values of unity, rivalry and passion and more than 150 million viewers are expected to watch it live on TV.

May the best team win!