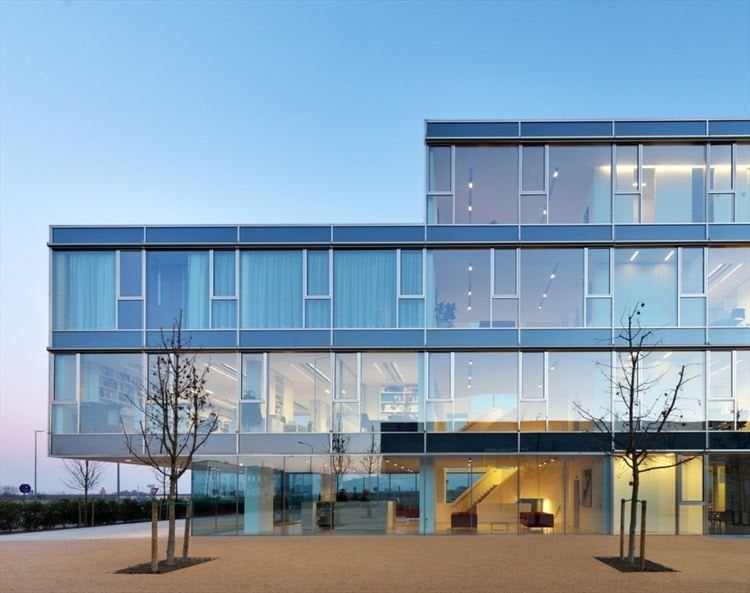 The Bentini Headquarters, designed by Studio piuarch architectural office in Faenza, is a building that stands out for its linearity and rationality of an almost Bauhaus inspiration. The composition, although ´decomposition´ may be a more appropriate term, of the facade recalls a painting by Piet Mondrian, an important exponent of the De Stijl artistic movement.

The complex is made up of two parallel buildings, one used as an office building and the other as an archive, warehouse and services area; between them, there is a tree-lined shaded area used as a car park, which is also an internal courtyard. Landscape enters the constructed space with force. It does so thanks to a transparent basement which cancels the separation between indoors and outdoors. A 300 sq m hanging garden looks out over the hills, with many transparent elements and with large windows providing a view of the landscape.

The facade of the office block overlooking the road gives the building a distinctive and unique character and is created by overlying the continuous glazed facade of the buildings with a modular grid structure in rectangular rooms of varying sizes. This compositional solution makes the perception of the building a continually changing one according to the position with respect to the facade and to the light which illuminates it during the day, modelling the volumes with shadows and at the same time offers a sequence of dynamic and changing views of the working life inside.

The rear of the building is designed to maintain a strong visual continuity with the surrounding countryside by means of a totally glazed facade. The two facades are different from one another but both are characterised by the will to open up to the outside through transparency, shielded on the road side and open to the countryside on the other side.