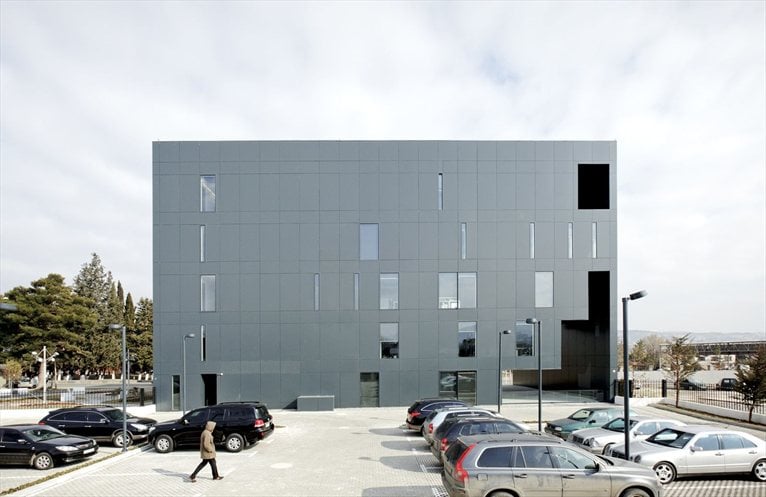 The young Georgian practice Architects of Invention have completed their first building in Tbilisi, the stunning Prosecutor's Office, the first in a series of justice buildings to be completed.

The office had already attracted the attention of the international press office for the interior of the National Olympic Committee House. Thanks also to this visibility, they were able to participate in the invited competition for this building in the north-western area of the city, just behind the city centre and near the offices of the Court of Tblisi.

The work began in May 2011 and the building was completed in the first few months of 2012. The Prosecutor's office consists of a stark black frame, a geometrical gate which supports other transparent and suspended geometrical volumes. These volumes are also staggered so that they create terraces and balconies. The inside uses the glazed surfaces intelligently to create a dynamic alternation of transparency and light in contrast with the dark and impenetrable structure holding it up.

The rigid geometry of the black frame is also used to symbolise the uncompromising nature of the judicial system. This is in line with a project figure common to a great deal of the “judicial” architecture.

"The semantic message here is that the centre is unknowable - purely because it is an endless reflection and ordering of the world around it”, says Architects of Invention director Niko Japaridze. “The structure mirrors the brain; the glass exterior mimics the lobar matter which processes exterior realities, while the hypothalamus is the centre of the nervous system controlling temperature, hunger, thirst and fatigue”.