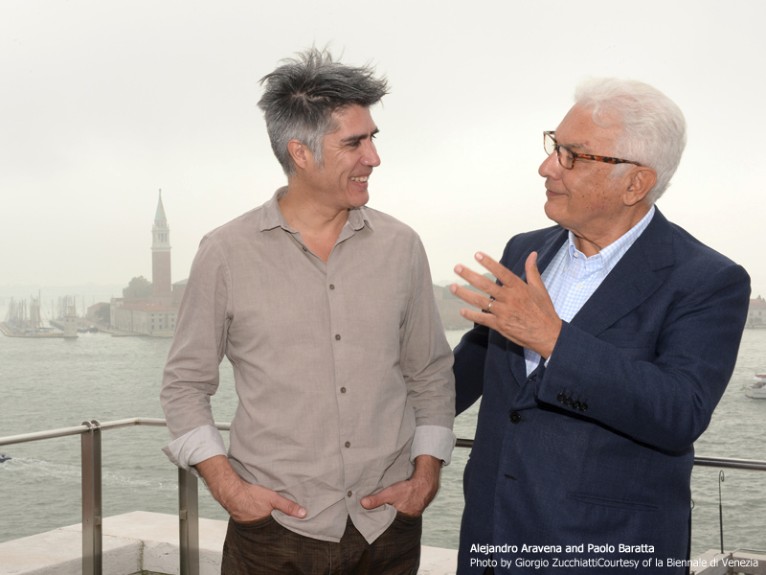 The President of la Biennale di Venezia, Paolo Baratta, accompanied by the curator of the 15th International Architecture Exhibition, Alejandro Aravena, met yesterday at Ca’ Giustinian with the representatives of 48 Countries.

The 15th Exhibition will take place from May 28th to November 27th 2016 (Preview May 26th and 27th) in the Giardini and the Arsenale and in various other venues in Venice.

The title chosen by Alejandro Aravena for the 15th International Architecture Exhibition is: REPORTING FROM THE FRONT.

Alejandro Aravena has explained his project as follows:
«There are several battles that need to be won and several frontiers that need to be expanded in order to improve the quality of the built environment and consequently people’s quality of life. More and more people in the planet are in search for a decent place to live and the conditions to achieve it are becoming tougher and tougher by the hour. Any attempt to go beyond business as usual encounters huge resistance in the inertia of reality and any effort to tackle relevant issues has to overcome the increasing complexity of the world.
But unlike military wars where nobody wins and there is a prevailing sense of defeat, on the frontlines of the built environment, there is a sense of vitality because architecture is about looking at reality in a proposal key.
This is what we would like people to come and see at the 15th International Architecture Exhibition: success stories worth to be told and exemplary cases worth to be shared where architecture did, is and will make a difference in winning those battles and expanding those frontiers.

REPORTING FROM THE FRONT will be about bringing to a broader audience, what is it like to improve the quality of life while working on the margins, under tough circumstances, facing pressing challenges. Or what does it take to be on the cutting edge trying to conquer new fields.

We would like to learn from architectures that despite the scarcity of means intensify what is available instead of complaining about what is missing. We would like to understand what design tools are needed to subvert the forces that privilege the individual gain over the collective benefit, reducing We to just Me. We would like to know about cases that resist reductionism and oversimplification and do not give up architecture’s mission to penetrate the mystery of the human condition. We are interested in how architecture can introduce a broader notion of gain: design as added value instead of an extra cost or architecture as a shortcut towards equality.

We would like this REPORT FROM THE FRONT not to be just the chronicle of a passive witness but a testimony of people that actually walk their talk. We would like to balance hope and rigor. The battle for a better built environment is neither a tantrum nor a romantic crusade. So, this report won’t be a mere denounce or complaint nor a harangue or an inspirational locker room speech.

We will present cases and practices where creativity was used to take the risk to go even for a tiny victory because when the problem is big, just a one-millimeter improvement is relevant; what may be required is to adjust our notion of success, because achievements on the frontlines are relative, not absolute.

We are very aware that the battle for a better built environment is a collective effort that will require everybody’s force and knowledge. That is why we would like this Biennale to be inclusive, listening to stories, thoughts and experiences coming from different backgrounds: The Architects, The Civil society, The Leaders, The National Pavilions.

So, the 15th International Architecture Exhibition will be about focusing and learning from architectures that by balancing intelligence and intuition are able to escape the status quo. We would like to present cases that despite the difficulties (or maybe because of them), instead of resignation or bitterness, propose and do something. We would like to show that in the permanent debate about the quality of the built environment, there is not only need but also room for action.»

The 15th International Architecture Exhibition of la Biennale di Venezia  will take place from May 28th to November 27th 2016 (Preview May 26th and 27th) in the Giardini and the Arsenale and in various other venues in Venice.

The 15th Exhibition will also present, as is traditional, the National Participations with their own exhibitions in the Pavilions at the Giardini and at the Arsenale, and in the historic city centre of Venice.

This edition will also include selected Collateral Events, presented by international entities and institutions, which will present their exhibitions and initiatives in Venice concurrently with the 15th Exhibition.