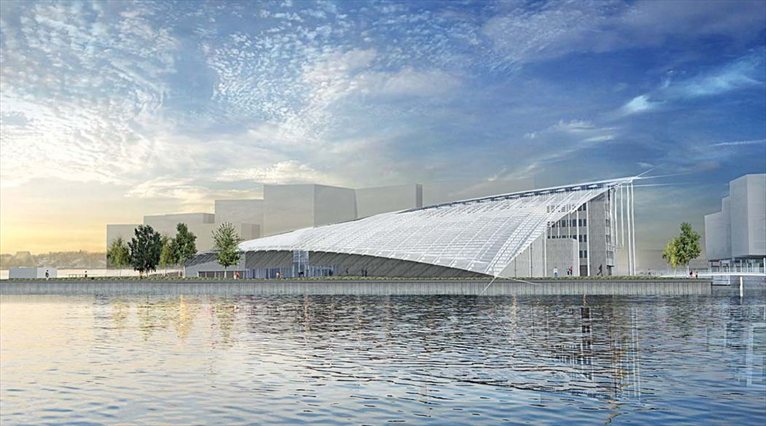 29th September 2012. This is the date the new Astrup Fearnley Museum of Modern Art in Oslo, designed by the Italian architects RPBW - Renzo Piano Building Workshop in collaboration with local architects Narud Stokke Wiig, will be officially opened.

Work is now fully under way in the Tjuvholmen district, for this milestone in European contemporary architecture, designed entirely by architect Niels Torp and characterised by a great variety of architectural expressions following one another.

The new museum project consists of two buildings, one which will host temporary exhibitions and one for the permanent collection of the museum which boasts work of artists like Andy Warhol, Damien Hirst, Jeff Koons, Charles Ray, Richard Prince, Matthew Barney, Bruce Nauman, Robert Gober and Cindy Sherman.

The identity of the project is undoubtedly highlighted by its curved roof which 'embraces' the buildings under it to emphasise their interaction and the architecture of the complex. Its curved shape, created by the use of laminated wood beams also covers the canal which runs between the buildings. The beams are supported by thin steel columns, reinforced by a system of cables which are inspired by the maritime character of the site. The characteristic geometrical shape of the roof derives from a section of a toroid and it slopes down towards the sea. Its surface is completely glazed to give luminosity and lightness, protecting it at the same time from bad weather.

The 800 m long promenade is also an integral part of the museum, offering visitors a visual contact with the sea and nature, as an important part of the cultural journey. Between the museum and the sea there will also be a gently undulating “sculpture park”, protected from the wind and the waves and which will be open to children and their parents to play and swim to enjoy nature and the sea.