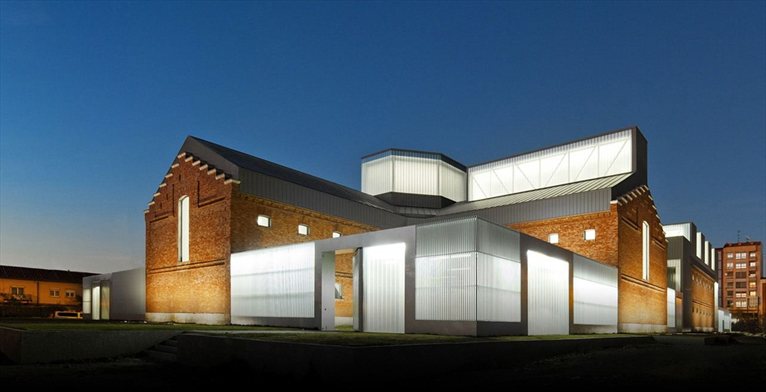 The old provincial prison building of Palencia in the autonomous community of Castiglia e León in Spain, has been recently converted by Exit Architects into a Cultural Civic Center. The building dating back to the end of the 19th century made with brick bearing walls in  “neomudéjar” style, is basically made up of four two-floor pavilions and others with a single floor.

The project aimed at converting the old prison into a place which highlighted some of the old spaces, incorporating new ones to support the new use. It was an intervention which respected the original architecture, giving it a contemporary and more friendly appearance in which light is protagonist.

The most important two-floor pavilions were emptied internally and a new independent structural support was created for the new floors and roofs. The new buildings were built as a connection between the existing buildings to facilitate connections with one another and to give the centre a new image. In order to introduce light into the building the old tiled roofs have been removed as they were in very poor condition and were replaced by other zinc ones in which there are large skylights which filter the light into the open halls.

The whole office is structured around a great hall which connects the 4 rooms of the old prison: it is an open space supported and illuminated only by some small cylindrical glass courtyards which provide its backbone. Its central position means that this space operates as a nerve centre for the complex and a distribution area for the users who cross the entrance pavilion and reception heading towards the other rooms (music, visual arts, etc.). Upstairs, there are two multi-purpose rooms to accommodate larger groups illuminated by large glass skylights.

The library, on the other hand, is reserved what were originally the prison cells. The reading rooms are organised around a very high central area forming an octagonal lantern. Various rooms are distributed around it and it contains the communicating staircases, the control areas and the offices.

The Centre is accessed by means of a luminous glazed route providing a filter between the city and the activity inside it. An external steel beam provides the connecting element between the glazed surfaces and the old brick walls. The use of metal materials like zinc for façades and roofs, profiled glass u-glass in the lowest buildings and in the skylights, as well as the aluminium screens providing light filters, contribute to giving the intervention a pseudo-industrial appearance.