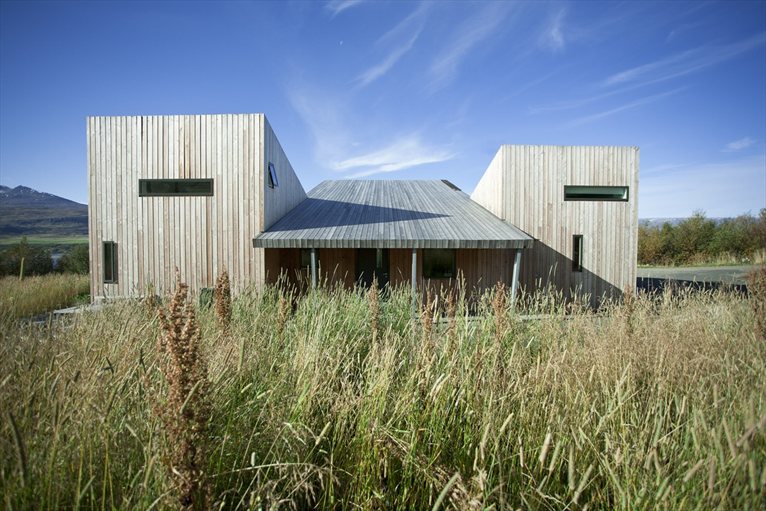 The young architecture office from Reykjavík ARKÍS architects were given the challenging opportunity of designing a very particular house in the north of Iceland called Villa Lóla. The project stems from a stimulating dialogue process between the designers and the client, who wished to construct a house that could be divided into three distinct apartments but which could above all fit harmoniously into the natural landscape.

Villa Lola is located just outside the city of Akureyri, the largest city in north Iceland, overlooking Eyjarfjodur Bay, with a spectacular open view over the mountains both to the north and south. ARKÍS architects had to take into consideration the weight of nature and the many different inspirations of the project.

In the end the beauty of the surrounding landscape combined with the plethora of inspirations from all over the world, ranging from Swiss chalets to a Californian ranch near the sea which the client had visited and even some Japanese spatial ones, led to Arkís designing a Spartan yet refined house which is essential, geometric, easy to build and requiring little maintenance, but at the same time liveable and poetic.

Villa Lola has a Larch-wood clad exterior. When Larch wood ages, it becomes an ash-grey colour and forms a natural protection in time. This material was also chosen as cladding for its capacity to fit in harmoniously with the natural shades of the site in which it forms natural combinations of light colours. In different periods of the year grass, wild rushes, weeds and Larch woods surround the house and dialogue undisturbed with the neutral surfaces of the house. The natural landscape has been left undisturbed.