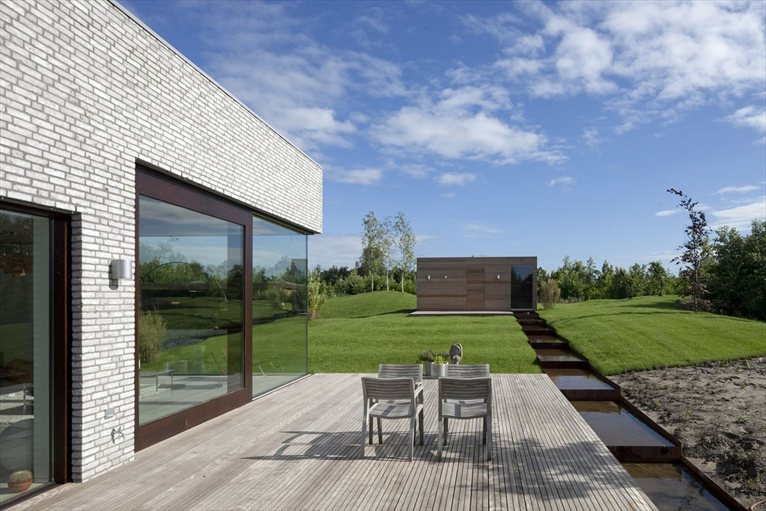 70F architecture have designed villa Frenay in Lelystad, a new city in the Netherlands founded at the end of the 1960's. The family who commissioned it requested light, air and space.

The concept of the project came from the idea of 'living on water' since Lelystad is a port city built on reclaimed land created by the famous Afsluitdijk dam, a 32 kilometre long and 90 m wide dam built by the engineer Carl Lely and other works, which transformed the inlet of the North Sea (Zuiderzee) into one of the largest freshwater lakes in Europe.

The compositional response of 70F Architecture for a site dominated by water was that of creating a long veranda covering the whole southern exposed front of the house, characterised by enormous glazed openings overlooking the water: from the sleeping area to the living area going around to the corner of the living room.

The children's bedrooms, with services and the laundry have been arranged along the non-water-facing Northern façade. By using the existing artificial hills, and accentuating them, the architects have created a 'carport' and storage room, half-burying it in the hill.

Another hill houses the wooden services block for relaxing and well-being, which contains a sauna and a striking corten steel waterfall which runs from this block past the terrace in front of the house and ends in the lake surrounding the house.

More than a house with outbuildings, the designers have managed to create a small residential area in spreading building and volumes throughout the surrounding landscape. In addition the T-shaped Gable with its glass corner façade brings the inside living spaces outside and around the house and the outside into the house.